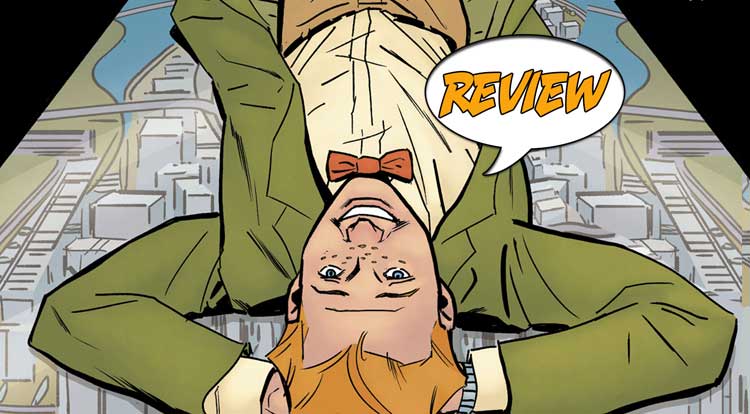 Previously in Jimmy Olsen:  Jimmy Olsen must die!  Wait, we’re getting ahead of ourselves. Jimmy Olsen lives!  Superman’s best friend and Daily Planet photographer Jimmy Olsen tours the bizarre underbelly of the DC Universe, featuring death, destruction, giant turtles and more! It’s a centuries-spanning whirlwind of weird that starts in Metropolis and ends in Gotham City.

And then we kill Jimmy.

I LIKE A BOOK THAT DOESN’T TAKE ITSELF TOO SERIOUSLY

Weirdly, we open this issue in the 18th Century, as young Joachim Olsson argues with someone who seems to be an ancestor of Lex Luthor argue over a land claim, ending with Joachim being murdered in cold blood (or at least thrown off the Metropolis Falls.)  In the present, Joachim’s descendant Jimmy is involved in a “news experiment” wherein he is to be injected with Metamorpho-derived DNA before jumping from the upper atmosphere down to Earth.  It goes poorly, thanks to an additional strain of DNA in the mix and a clear attempt to sabotage things, leading to a Giant Turtle Olsen crashing to Earth, saved as the last second by Superman.  His fall also destroys a statue called the Monarch of Metropolis, leading Perry White to fire him…  until the IT guy points out that Jimmy’s viral antics are literally the only part of the Daily Planet that actually makes any money.  Still, they decide it will be safer to have him out of the city for awhile, sending him to Gotham City.  Oh, and also he was murdered?

This book is a really attractive package, as Steve Lieber balances the excesses of story (like a giant turtle falling to Earth) with some truly impressive storytelling and facial expressions throughtout the book.  There’s even a “Superman winks to the readers” moment that plays out traditionally before switching to a different perspective and showing how creepy it is for everyone in the room with him.  As for Fraction’s scripting, this issue is quite witty and filled with narrative flourishes like repeated title sequences for each different timeframe and setting.  Better still is the fact that, even among sequences that are clearly tongue-in-cheek and very silly, there’s a sense of real menace at the end as Jimmy reveals that he’s missing, presumed dead.  Much as with Fraction’s take on Hawkeye, the book manages to be flipppant and irreverent without undermining storytelling or drama, and having Jimmy (who has long been a magnet for weeeeird stuff) at the center of the story gives it extra resonance.

Modern readers may not remember it, but Jimmy was the headliner of his own solo(ish) title for the better part of twenty years, and Superman’s Pal Jimmy Olsen #1 upholds that long heritage in fine fashion, delivering a fast-paced, exciting and most of all, fun reading experience, earning 4 out of 5 stars overall.  I was in for the full 12 issues based on the teaser seen in previous Super-books, but this issue makes it clear that I made the right decision.  Fingers crossed for a Wonder Lad appearance!

The adventures of the world's greatest pal are off to a high-velocity start and all of it is entertaining and well-drawn.