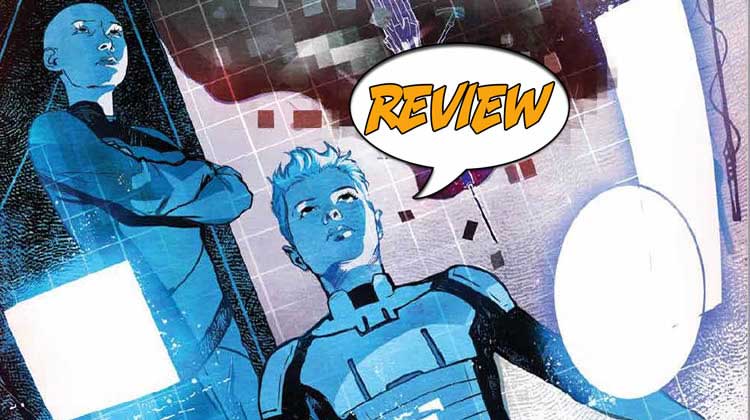 A lot of sci-fi writers deal with the after-effects of an apocalypse. But what do you do when the real apocalypse is upon you? SOLICITATION: As Deva attempts to stop one killer and redeem another, humanity’s future is determined with a gamble—will this ship turn out to be a lifeboat, or a tomb?

CAN THE FINAL HUMANS SURVIVE?

“The universe ended. Reality ended. All we have is us, in this place, together.” That’s part of the first page of Infinite Dark #8, the last in the series. Humanity is at its lowest place. The only people left are those on the Orpheus, a ship originally intended to save humanity from total extinction.

Now the Orpheus stands on the precipice of complete eradication. Human beings might disappear from the universe, likely forever.

Deva Karrell is one of those last humans, struggling to know what to do next. She’s far from perfect, but someone who is one of the leaders of this last cluster of humanity.

Sebastian, another person on the ship, has wrecked the computer that has been an important part of the Orpheus.

These and other human beings on the ship must pick between two choices: 1. A stay of execution that would still happen when resources are gone, and 2. Shutting down what protects the ship and facing the future together.

The undercurrent to all of this is: Should humanity survive? Or have we done too much destruction and bad in our time in the galaxy, and we should cease to be?

Yes, it’s a dark story. It’s called Infinite Dark, after all. But in our time here, we all hope for the light to come and make our futures possible.

The darkness is a scary place, for sure! And the people left are like the rest of us, imperfect and not necessarily the best for the universe to continue.

Ryan Cady has crafted a story that ends with a spark of hope for humanity. More than that, I won’t say. It’s a brilliant examination of existence, and what can happen to us if we aren’t careful. Do titles and roles really matter? Maybe not!

I love the characters, the pacing, the careful unfolding of the story. And I adored the end, with all its ambiguity. Wow!

To tell this story, making sure we understand what’s happening and who is doing what, that’s quite an accomplishment, especially given the high-concept story. Mutti does a superb job with facial expressions and actions, pulling me along strongly.

The last page or two are particularly impactful. I find myself thinking about them occasionally, even after reading the comic. There’s a lot to think about!

BOTTOM LINE: The Dark and The Light

For many decades, science fiction tended to be darker in tone. That was the case until Star Trek came along. As much as I enjoy Trek, sometimes I long for the deeper SF that makes me think and wonder.

That’s what Infinite Dark did. I still haven’t finished examining what happened, and that’s a good thing! The possibilities are boundless!

Where do we go from here? Well, that’s up to us, and that’s the way Cady and Company have told the story. I know what I’d prefer, but I can see other ways things could go from here.

If they ever decide they have a story worthy of following up this series, I’d love to read it. Until that happens, though, I’ll ponder this series and treasure it for a long, long time to come.