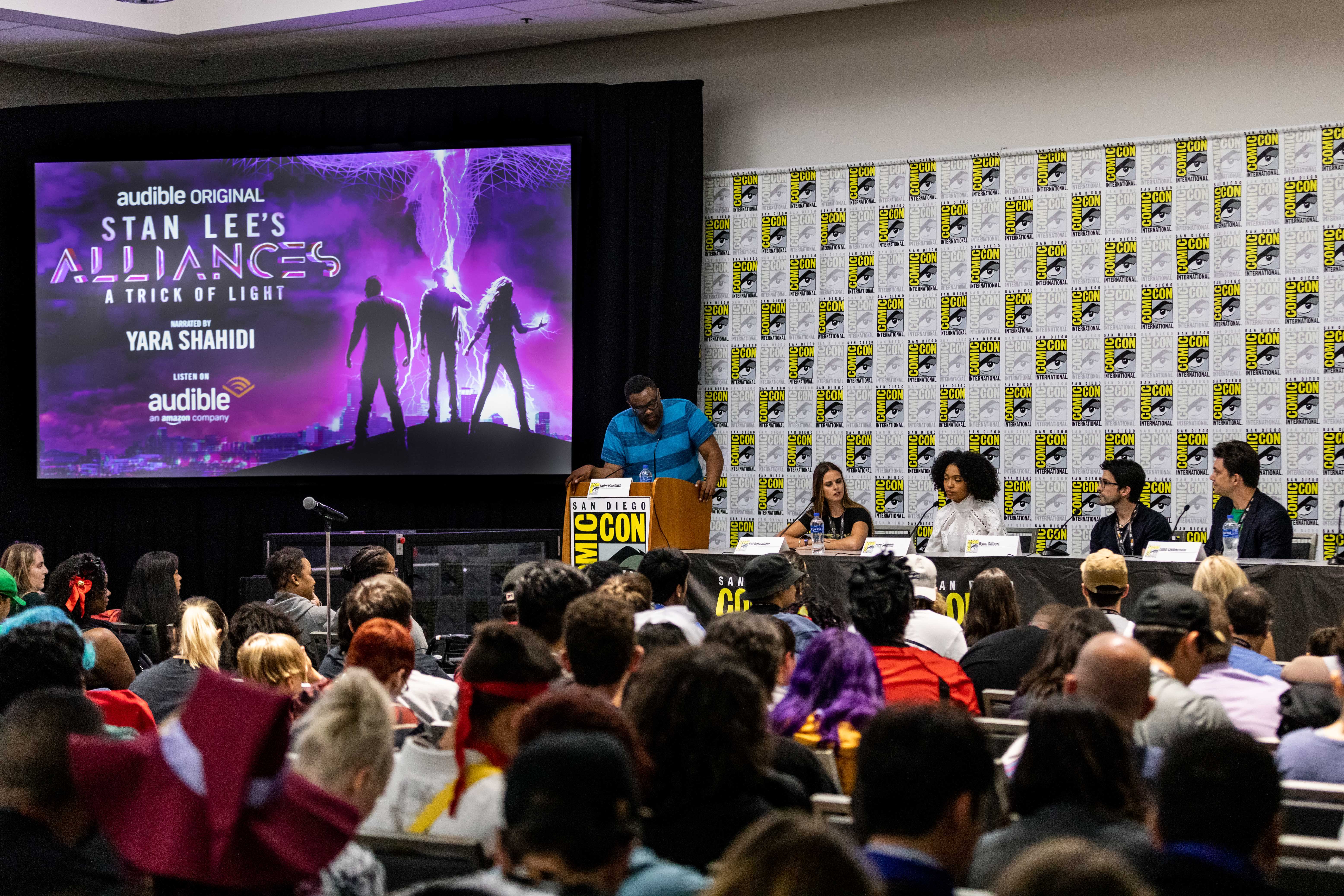 On the heels of the global launch of Stan Lee’s Alliances: A Trick of Light, Audible Inc. announced the greenlight of the next project in the expanding Stan Lee’s Alliances universe. A Trick of Light, a New York Times Audio Bestseller, was co-created by Stan Lee’s POW! Entertainment, Luke Lieberman and Ryan Silbert, where listeners experienced an epic story set within a tech-centric, highly-connected world, unnervingly reminiscent of our own. The new project will introduce new characters and stories, expanding Alliances in the same universe.

David Blum, Editor in Chief of Audible Originals, commented: “A Trick of Light took audiences on an immersive adventure through the twists and turns of modern society, and introduced an entirely new superhero universe to our listeners. We can’t wait to offer the next amazing Alliances adventure to Stan Lee’s worldwide fans.”

Ryan Silbert and Luke Lieberman commented: “Bringing Stan Lee’s Alliances: A Trick of Light to listeners around the world is the honor of a lifetime. With this new project, we are so excited to introduce a global audience to new characters, new stories, and new adventures, the kind only Stan Lee could have envisioned.”

Gill Champion, Stan Lee’s POW! Entertainment President, commented: “We are excited to introduce more characters to the worldwide audience of A Trick of Light. We know Stan would be thrilled to know this creation he worked so hard on is evolving in a unique and exciting way. This innovative expansion in collaboration with Audible is part of our continued efforts to propel Stan’s iconic legacy to his loyal fans who span the entire world for generations to come.”

In the first installment of Stan Lee’s Alliances, listeners were introduced to a mysterious young woman, Nia, whose fate is intertwined with a seemingly ordinary Midwestern teenager, Cameron Ackerson, whose quest for YouTube stardom takes him to the heart of the Great Lakes Triangle, where he is imbued with the power to “see” and “hear” a new reality. As Nia and Cameron’s relationship grows, they conspire to create a more righteous online universe, dishing out justice big and small, but wind up crossing a shadowy outfit called OPTIC, which goes after them for its own nefarious purposes. Meanwhile, a threat of galactic proportions emerges, imperiling humanity’s very existence by harnessing our individual desire to connect as the very means to destroy us.

ABOUT STAN LEE’S POW! ENTERTAINMENT, INC
Stan Lee’s POW! Entertainment Inc. is a multimedia company founded in 2001 by the iconic comic book creator Stan Lee with his friend and business partner Gill Champion, who is the President today, to create and license intellectual properties for entertainment media, including: feature length films, television, merchandising, branded content and other related ancillary markets as well as exclusively maintain and protect the ownership of his name, likeness, voice, trademarks and publicity rights throughout the world.

ABOUT RYAN SILBERT AND LUKE LIEBERMAN
Ryan Silbert is an Academy Award-winning filmmaker, writer, producer, and founder of Origin Story Entertainment, a multi-platform entertainment company with a global focus on storytelling. Silbert’s expansive repertoire includes such films as the Academy Award® winning GOD OF LOVE and Spike Lee’s THE GIRL IS IN TROUBLE. As the founder of Origin Story Entertainment, Silbert is currently in development on television, film, and immersive narratives projects created specifically for audio platforms. He is a co-creator with Stan Lee and Luke Lieberman on the New York Times bestselling Stan Lee’s Alliances: A Trick of Light.

Luke Lieberman is a writer and filmmaker who started his career in entertainment under the mentorship of Stan Lee. He is responsible for the relaunch of the Red Sonja franchise and overseeing more than 50 graphic novels; writing numerous issues himself, including Red Sonja: Birth of a She-Devil for Dynamite Entertainment. New York Times bestselling Stan Lee’s Alliances: A Trick of Light is Luke’s first collaboration with Stan Lee and co-creator Ryan Silbert.