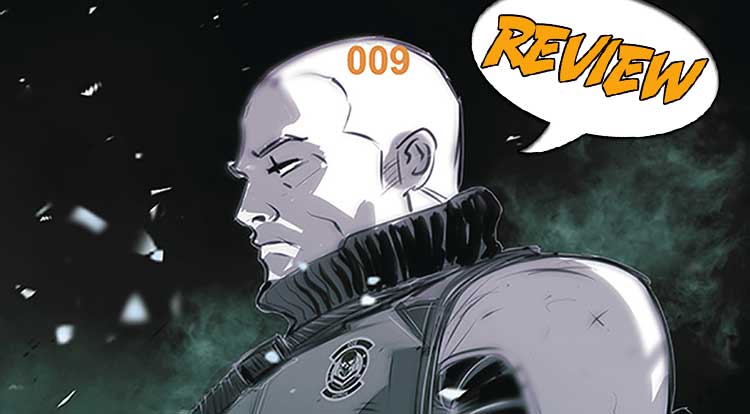 A fun thrill ride that won’t be for everyone, but if you like the scent of high octane flooding your nostrils, then The Warning #9 is the read for you.

The Red Machine has wreaked havoc across California, which is burning as the issue opens.  Jackknife leads Red Machine away from the carnage wreaked on combat brigade Gladiator Two-Six.  But it isn’t just the one fearsome creature they must face, as Jackknife discovers in our awesome Major Spoilers review! Previously in The Warning: The arrival of an alien craft over the west coast of America presages chaos and destruction.  A multi-national combat brigade is hastily assembled to combat any alien aggression.  As California burns and the alien dubbed Red Machine rampages unchecked, it is up to the remnants of Two-Six, in the shape of agent Jackknife, to stop it and the other members of the alien triad.  And ticking in the background is an alien star-drive bare hours from destruction…

The Warning #9 creator Edward Laroche doesn’t waste any time picking up from the previous issue, as agent Jackknife pauses just long enough to contemplate her mortality before leading away the alien known as Red Machine from the carnage it has wreaked.  This breathless approach has worked in previous issues for Laroche, and when you’re onto a good thing, and The Warning #9 is a very good thing indeed, go with it.

Alien invasion stories are a dime a dozen by now.  From The Day the Earth Stood Still, to Mars Attacks to Pixels (yes, I went there) it is very, very hard to do something new in this space.  If The Warning doesn’t plow new furrows in this crowded field, it does stand out by virtue of the vigor Laroche brings to his work.

Laroche keeps character dialogue to a minimum.  By now, the alien threat has been well delineated, and the human characters are charged with a desperate effort to thwart further destruction.  So instead of a dense hedge of character chatter and description, it is left to Laroche’s stunning art to do the heavy lifting.

Kinetic doesn’t begin to describe the breakneck pace of the opening pages of The Warning #9.  Horizontal panels filled with chaos are stacked one atop the other as they cascade down each page in a heedless rush.  Characters and backgrounds warp and shift at high speed, illuminated by the burning city in the background.  Lightning crackles as Red Machine pursues Jackknife, while rapidly approaching storm three thermobaric missiles…

While speed is paramount, Laroche does spend a little time giving us the alien perspective.  Because while the alien’s methods to bring destruction, the bitter irony that only the audience understands is that they’re on a mission of discovery, to catalog this new world they have discovered.  It is a pity, then, that that cataloging involves, as one of the aliens says – surgery, bisection.  And, most intriguingly, to understand why they and the humans look so much alike.

It is this perspective change that makes The Warning #9 stand out more than it deserves.  The aliens are different just enough to make them, well, alien.  Their look, the way they speak, is just off enough from a human perspective that it disturbs, unsettles.  And the way they see humanity, as something to be cataloged, is especially chilling.

In the end, though, it is the action that makes The Warning #9 standout.  There’s a definite fetishisation of the military aspect of the story that speaks to a great respect for the institution, or a yearning to ride into battle on top of a tank, shooting everything one comes across.  Gunplay, armored warriors, power stances, flying blood, brains and brass.  The Warning #9 has that, and more.

An interesting mix of true action with a touch of introspection, The Warning #9 is hell bent on racing to the finish as fast as possible, and with as many bodies left in its wake.  Edward Laroche brings the gunpowder, but it is the colorist Brad Simpson who lights the fuse and runs like hell.  A big, brash, bold book, The Warning #9 fills your veins with adrenaline, and a yearning for more.