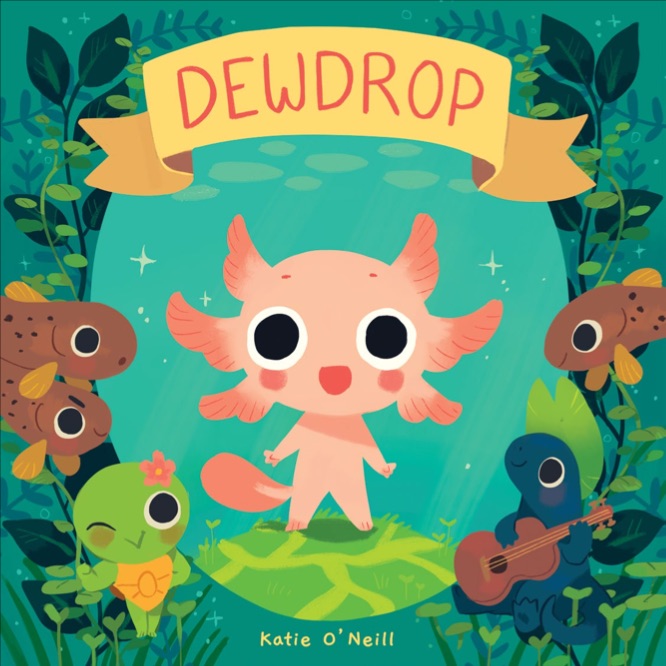 Today in conversation with her editor at Comic-Con International, New Zealand creator Katie O’Neill announced her next book, Dewdrop, coming in early 2020!

Katie O’Neill says “I’m so happy to be creating a book for younger readers, especially one with themes of mindfulness and self-fulfillment. I hope the ideas in Dewdrop will sew seeds that may stay with children in some small way, and eventually grow when they need them most. It’s also a real honor to help with starting kids reading in any way I can, so I am very excited for them to meet Dewdrop and his friends!”

From the author of The Tea Dragon Society comes Dewdrop, the delightful children’s tale of an adorable axolotl who cheers on his underwater friends as they each bring their talents to the pond’s sports fair!

Dewdrop is an easygoing, gentle axolotl who enjoys naps, worm pie, and cheerleading. When the yearly sports fair nears, he and his friends—Mia the weightlifting turtle, Newman the musical newt, and three minnows who love to cook—get ready to showcase their skills to the whole pond! However, as the day of the fair gets closer, Dewdrop’s friends can’t help putting pressure on themselves to be the best. It’s up to Dewdrop to remind them how to be mindful, go at their own pace, and find joy in their own achievements.

Editor Ari Yarwood says “It’s been an absolute honor to work with Katie O’Neill for the last four years, and I’m so excited for readers to experience her first early reader book in Dewdrop! It’s such a sweet and thoughtful story, and I think children will relate to the adorable characters Katie has created.”

This adorable new picture book teaches the values of friendship, teamwork, healthy competition, and community in a sweet story for parents and children to enjoy together.

Dewdrop will be released in finer comic book shops and bookstores everywhere in April of next year for $12.99!