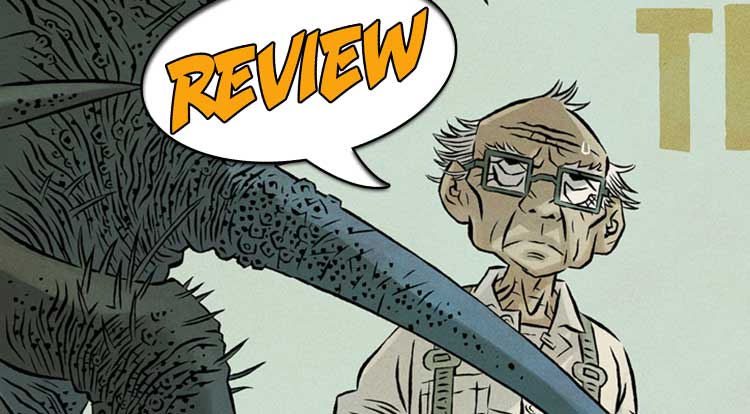 Arami has become the new Zero, and Brandt must decide what he is going to do with his own life. Is he ready to move on yet? Find out in Ghost Tree #4 from IDW Publishing. Previously in Ghost Tree: Brandt has found the ghost of Arami, his first love, and reminisces with her at length. He seems happy, but she asks him about his marriage and he confesses that he and his wife, Alice, have been growing apart. It comes out that this has happened before in the family. When Ojii and Obaa came to live in this house in the woods, Ojii spent most of his time alone, in the woods. We know he was talking with ghosts, but now we see how alone she felt. Ojii’s ghost overhears her. He talks to Brandt and warns him that he is spending too much time with the ghosts. The demon who has been terrorizing the ghosts in the area returns, and the Zero steps in to protect them. The demon flees, but strikes down the Zero who fades away, leaving his mask to Arami.

THE MELANCHOLY OF LOVE AND LOSS

Ghost Tree #4 opens with Ojii talking with Brandt, wondering about memories. Why do we remember the things we remember, and what makes some otherwise mundane things unforgettable? And is that what life is, after all?

The demon shows up again, headed for the house. Ojii’s ghost faces it down. He won’t let the demon harm his home or anyone in it. He realizes now that he was not fully present there in life, but he will make a stand for what he loves now after his death. Arami dons the Zero mask and jumps in. Brandt is ready to run after her, but Ojii’s ghost-friend Rasto stops him. Arami faces the demon, and Brandt realizes something about it – it isn’t an outsider. It’s a ghost itself that has been unable to leave. Arami calls to it and the demon body is shed away leaving a ghost. It says its last words in an old language no one understands and fades away in peace.

Brandt decides it is time for him to leave. Obaa wants to talk to him before he goes, about his marriage. She knows what it’s like when two people grow apart, and her memory is of trying time and time again to talk to Ojii, only to have him hide in the forest. She felt abandoned, and never knew why. Ojii, by asking Brandt to talk to her, finally apologizes and tells her that he loved her. This moment is so poignant and the words are so eloquent. It reminds us that we are mortal, and the time we have with others is short.

Brandt says his good-byes to the ghosts and to Arami. He’s had a rare chance to touch his past and to see what his future could become, and he has decided to return to his life and to try to fix what is broken. He does try to make amends, to explain himself, but life still goes on for others, and sometimes the timing is still not right. How many missed opportunities are there in one’s life caused by getting lost in one’s own thoughts rather than doing something?

Ghost Tree #4 is about memories, and it does an excellent job of capturing moments as though they are encased in crystal. In the first page as Ojii talks, Brandt remembers, and these panels round out his life so far deeply yet economically. Another beautiful moment comes after Brandt talks to Obaa on Ojii’s behalf. There is a moment when she looks up and her eyes widen, as though she’s seen a ghost. Brandt embraces her as she talks with tears in her eyes, and when they look up, Ojii’s ghost is gone. This left me crying every time I read it.

The forest scenes are compelling. We can feel how Brandt is drawn to it, and it is so magical with the ghosts and demon. The stand off is dramatic, even though this isn’t so much an action book. The demon looks sort of like a giant centipede, except for having a face that can make terrifying, toothy expressions. But when it changes from that form back into the human ghost and it gets its release from the world, it looks so peaceful. There’s also a nice bit of closure framing – the kami we saw at the beginning of the first issue is there at the end of this issue.

BOTTOM LINE: LIFE IS SOMETIMES A SERIES OF SMALL TRAGEDIES

Ghost Tree #4 is thoughtful and magical. The characters grow and surprise us. I think, by the end, everyone is a bit wiser, although not necessarily happier. I love a story that can make me feel something, and this one has a lot of feels.

A gentle reminder that life is for living and memories are not a place to hide.