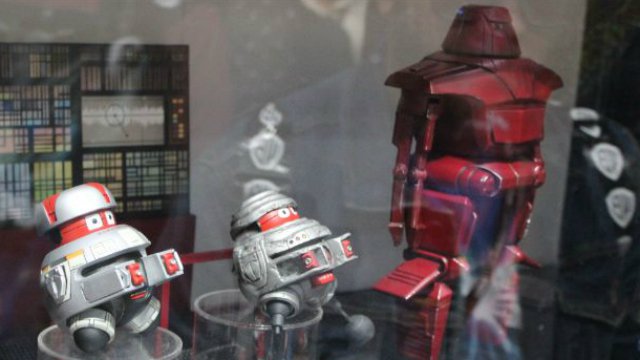 Long time followers of Major Spoilers know that we have a real love for The Rocketeer, and some of us even like The Black Hole. Diamond Select Toys is earning big points this weekend, as they toy company revealed upcoming toys based on the Disney movies.

SuperHeroHype shared images from the show floor of a stunning Cliff Secord Rocketeer action figure, and I’m loving what looks like helmet that fits over Cliff’s head, as well as a removable rocket pack. I especially like the rocket exhaust that you can attach to the pck to pose Cliff in take-off and flying mode. For Black Hole fans, it looks like we are also getting action figures of Maximilian, Old B.O.B., and V.I.N.CENT! I didn’t see anything discussing figures of Charlie, Harry, Dr. McCrae, or even Dr. Hans Reinhardt, but it would be pretty cool if those figures came later as well. Diamond Select Toys doesn’t do too many large toy projects but a USS Palomino set or even a small model of the USS Cygnus would be cool.

No word on price or release date at this time.