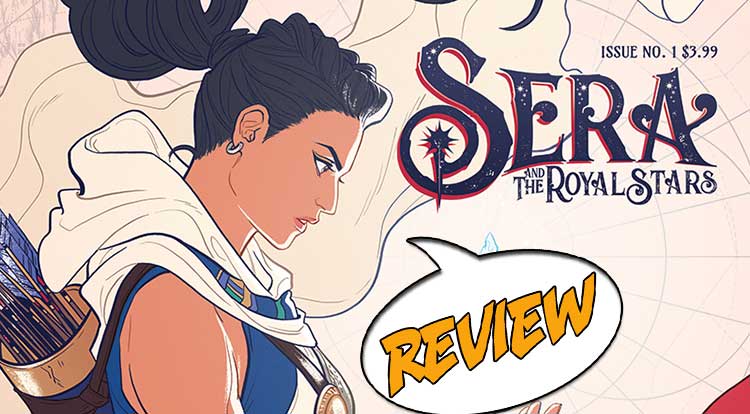 Sera and the Royal Stars #1 Review

Will the lives of the people of Parsa be lost in civil war, or by the fate of the stars? Their destinies hang in the balance as we will see in Sera and the Royal Stars #1! SERA AND THE ROYAL STARS #1

Previously in Sera and the Royal Stars: The Empire of Parsa is in the grip of a civil war, brother against brother. As if that weren’t challenge enough, there is a terrible famine. Against this backdrop, Princess Sera is seeing visions and must choose between her kingdom and an even greater quest.

CHOOSING BETWEEN FAMILY AND DESTINY

Sera and the Royal Stars #1 opens on a battlefield in the Western Territories of Parsa. Princess Sera, along with her sister (Roya) and brother (Jahar) have held firm against Lord Shaheen. As they begin to gather their dead, there is a second attack. An eclipse starts and Sera suddenly finds herself in front of the deity Mitra who tells her she’s been chosen for a task. She rejects him, returns to her body, and faints.

When she arrives home, her father is naturally concerned, but even moreso as we learn she’s been having these visions for some time. She’s also not the first in her family to have them. Her mother, Queen Tara, had then, and left her family to go on a quest. It is not surprising that the King is upset by this.

But that night, when she’s sleeping, Sera has another vision of Mitra. She must free the Royal Stars that are bound to the physical realm, and if she doesn’t, her people will all die. In an interesting twist, Mitra removes her heart and replaces it with a magical crystal. Sera awakens, thinking it was all just a dream, until her chest hurts and glows, and she sees visions of her people dying and hears a voice in her head directing her to head East and find the Bull. She doesn’t so much as accept her quest as have it forced upon her.

Steeling her resolve, Sera goes to the stables and saddles her horse, only to find Roya and Jahar there. Roya accuses her of being selfish and, even worse, being like their mother who left them to go on her quest and died. Jahar is more resigned to her going but is worried about not having her tactical expertise at hand for them in the war. Somehow, in this drought-stricken land, he found some figs for her as a parting gift. Sera rides off, musing on the family history of always being at war, of having a father and an uncle who could not agree. It’s a nice place to fill us in, as well as give us a sense of the distance she’s traveling.

She reaches a village on the steppes where they recognize her and tell her of a temple she must go to. This is where the story becomes more magical with a richly folkloric flavor. In the temple is an old, old man surrounded by heaps of books and scrolls. He has forgotten who he is, and his speech is rambling with phrases that make some sense. Lizard people attack them, calling the old man the Eye of the Bull. Sera makes the connection, fights off the lizard people, and frees the old man from the spell that binds him.

Sera and the Royal Stars #1 is a book of breathtaking beauty, rich in character and detail. I love that it is set in Persia and the flavor of it is so different from what we see in more Western-oriented fantasy tales. The robes, the clothing, the architecture – it’s all a sheer treat for the eyes.

I like the character and costume design. Sera, Roya, and Jahan are similar enough that we rapidly understand that they’re related, but they look different enough that we can easily tell them apart. They’re all wearing loose white pants with blue and gold tunics accented with red sashes and capes. They look like uniforms, but they also have small distinct differences among the three. There are also some very pretty and expressive horses.

Travel through Parsa is harsh and beautiful. We see the desert by day and by night, the weathered rocks and wizened trees, vast barren spaces and large walled cities. When Sera reaches the steppes, the landscape is suddenly much greener. I also love our glimpse of the steppe peoples, their costumes, their village – in a few short panels, we get a sense of an entirely different culture. And the adventure in the temple, as well as Sera’s visions of Mitra, are simply magical.

Sera and the Royal Stars #1 opens strongly and remains interesting. The setting is established quickly, and never feels like we’re getting and information dump. The folkloric elements of the story are powerful, and they strike a chord as such even when they aren’t the same elements we’ve seen a thousand times before. If you like a good fantasy quest, I think this one is off to a power start.

Sera and the Royal Stars #1

Chosen by fate, Sera resolutely sets off on a quest in the hopes of saving her people.