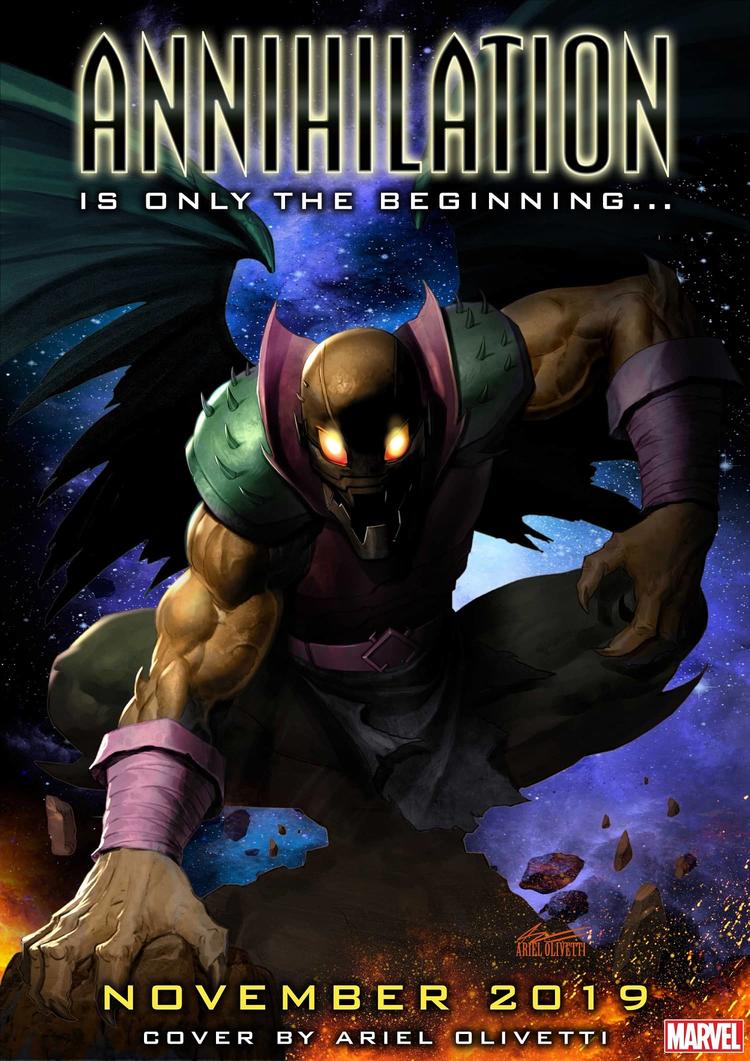 Here is a rundown of the announcements made by Marvel during the Friday panels at the San Diego Comic Con 2019.

Keep in mind a lot of these announcements are for titles shipping in October, which means next week’s solicitations are going to be filled with a lot of this same information.

Just one of these stories is a look back at the reign of one of Spider-Man’s most terrifying foes — the Red Goblin AKA Norman Osborn, in possession of the Carnage Symbiote and the Goblin formula! The rowdy, raging Red Goblin will be revisited in RED GOBLIN: RED DEATH #1 by writers Pat Gleason, Rob Fee, and Sean Ryan with art by Pete Woods, coming in October!

Norman Osborn first became the Red Goblin in AMAZING SPIDER-MAN #798 — in RED GOBLIN: RED DEATH #1, fans will find out just how much mayhem and madness the Red Goblin caused in a special one-shot coming to comic shops in October! Who else did Norman Osborn harm while inhabiting this deadly double disaster? Gleason, Fee, Ryan, and Woods promise to reveal all!

Johnny Blaze ain’t just the king of Hell—he’s the warden too. He’s the first line of defense between the demonic hordes trying to escape the joint and the lords of other hells making a play for his throne and all the power that comes with it—including a certain evil queen from his past! Meanwhile, Danny Ketch never wanted to be a Ghost Rider. Now that his brother’s in charge downstairs, Ketch must take on the duty of Earth’s Spirit of Vengeance full-time—no matter how much he’d rather be doing anything else…

Ghost Rider #1 is expected to arrive in November.

The Spider-Man panel at San Diego Comic-Con 2019 revealed more additions to the growing web of Spidey stories! And one lucky lady just hit the jackpot with her own series — THE AMAZING MARY JANE #1 by writer Leah Williams and artist Carlos Gomez will bow this October, putting the spotlight on the love of Peter Parker’s life! But if Spider-history has taught us anything, such a position is rarely a good one and usually spells trouble! In a story spinning from the pages of AMAZING SPIDER-MAN #25, Mary Jane Watson just got her big shot — but at what cost? And can she really trust anyone as she pursues her Hollywood dreams?

After spending much of his time warning against a trillion-dollar global effort to create the first “artificial” black hole, Doom is now wrestling with visions of an entirely different life and a better future. But when a massive terrorist attack results in massive casualties, Doom is the prime suspect. What will happen when Doctor Doom is running from the law — and himself? And what about December? Marvel has something big planned for December, but we’re going to have to wait a bit longer for that one.

Players will have access to some of the most beloved Marvel characters including the Avengers, Spider-Man, Daredevil, and the Guardians of the Galaxy, complete with their signature moves and abilities that will allow players to build their own unstoppable team in the fight against well-known villains such as Loki, Doctor Octopus, and Ultron. CRESCENT AND IO #1
How did Dan Bi, a young girl from South Korea, first bring an ancient mystical bear spirit into the modern world? How did this unlikely duo become the evil-smashing team known as Crescent and Io? Writer Alyssa Wong, artist Jon Lam, and more join to tell the tale this October! Plus: Marvel’s Future Avengers feature in a brand-new story that runs across each FUTURE FIGHT FIRSTS issue! WHITE FOX #1
Ami Han is White Fox: a spy, a Super Hero, and the last of the kumiho—a mystical race of shapeshifters. But who was she before she became White Fox? And what happened to the rest of the kumiho? This October, Alyssa Wong teams up with Kevin Libranda and others to provide all the awesome answers! LUNA SNOW #1
As a South Korean pop sensation, Seol Hee melt her fans’ hearts…and now as Luna Snow she has the power to freeze her enemies! How does Luna juggle being an international pop star with battling evil as a Super Hero? How did she gain her powers and what does Stark Industries have to do with it? Alyssa Wong, Gang Hyuk Lim, and more join forces to forge the powerful answers this October!

Miles Morales has more than staked his claim in the Spider-Verse as one of Marvel’s resident Web-Slingers — so he’s probably ready for a new, crazy challenge, right? At the Spider-Man panel at San Diego Comic-Con 2019, a new series starring Miles Morales was announced, and he won’t be alone! Miles is going back to the Multiverse in SPIDER-VERSE, a six-issue limited series by writer Jed MacKay and slew of artists including Juan Frigeri with Arthur Adams, Stuart Immonen, Stacey Lee and more, coming this October.

IIn SPIDER-VERSE #1, out this October, Miles falls through a portal and Miles finds himself at the center of an adventure across the Multiverse that will feature a who’s who of creators and characters as the series spins forward. What other Spider-People will Miles meet? You’ll have to pick up SPIDER-VERSE #1 to find out!

We saw the teaser image a bit ago, but now we know what is going on with Marvel Zombies. In October, Phillip Kennedy Johnson and Leonard Kirk are teaming for a new one-shot, with a new mini-series arriving in 2020.

And… I think that is is for the day. Did we miss anything? Is there something on the list you are most excited about? Use the comment section and let us know!