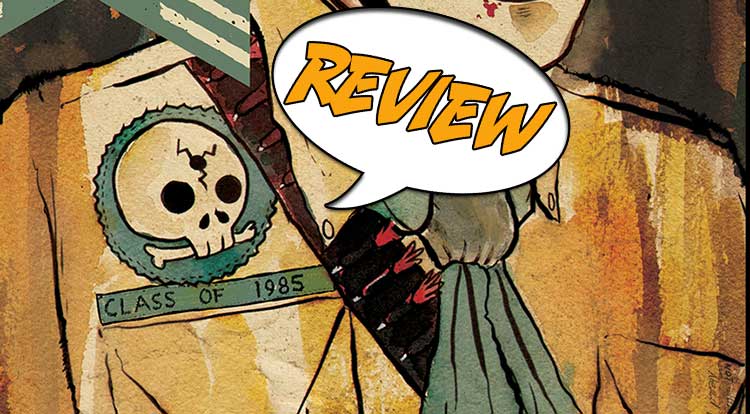 This is it – the culmination of an epic series of spies, betrayal and death.  Can our renewed quartet find a way to survive and turn the Black Badges into a force for good?  Find out in our Major Spoilers review! Previously in Black Badge: An organization that for years has done the dirty work of espionage across the world using supremely talented children was finally exposed for being the corrupt to the core organization it had been twisted into.  After taking down William with the aid of the SWABBIES and their leader, codename Hooka, the Black Badges were left at a loose end.  But what if instruments of evil can be beaten into instruments of good..?

THIS IS THE END, BUT THE MOMENT HAS BEEN PREPARED FOR

So, how do you finish an epic twelve part series like Black Badge?  With a bang?  Or a whimper?  A carefree toss of the head?  Do you do it von Ryan’s Express style, with the hero gunned downed by those rat Nazis right at the very end, with Switzerland just in sight?  Do the heroes retire to the Shire and their old lives, only to be haunted by what they saw and did?  Or do they become a force for good, instead instruments of a madman?

Black Badge #12 is very much a coda to an intriguing series featuring a quartet of orphans trained to be spies and carry out acts of espionage around the world.  Cliff, Kenny, Mitz and Will all donned the garb of scouts, better to pass ignored while on mission.  Whether it was selling weapons to warlords, or guiding a key figure to freedom, the quartet became gradually uneasy about the sort of missions they were on.  After the apparent death of Willy, their suspicions became further aroused, until the entry of a trio of figures from the 1980s, who themselves had been in Black Badge, began to shine a light on what the organization had become.

And they won, as we saw in Black Badge #11.  William’s conspiracy exposed, the bad guy and his cronies taken down and out heroes left at a loose end.  What to do, what to do?  And this is where Black Badge #12 offers up a better, brighter future not only for our guys, but indeed, for the world as well.

GOING OUT ON TOP

Some might quibble at Matt Kindt’s desire to end on a high note.  After all, in a world conditioned to expect the death of heroes a la Game of Thrones, it seems a mite trite to go out on a high, with kids running around the world, taking down dictators, opening borders so shipments of food and medicine can reach the needy and generally making things better for mankind.  And yet it works precisely because it is earned.  The characters go from being unwitting tools of a man too cynical to see his approach was making matters worse, to individuals prepared to accept what they were doing was wrong, and be prepared to own it and try to set things right.  In an era when cynicism and exhaustion are the order of the day, Black Badge #12 ends on an uplifting high that is both believable (mostly) and leaves the reader feeling good about themselves.  Because if these guys can go from unwitting tools of destruction, to witting tools of good, then we, with our own smaller, sometimes petty concerns, can do the same.

Kindt gives us plenty of time for some action, and current affairs relevancy, as a plan to open the Venezuelan border is executed to perfection.  It does feel here the story is on a bit of a rails run to success, as all problems are easily swept aside.  But it’s done with a sense of urgency and pace that in the moment you can overlook it and just enjoy the ride.

Tyler and Hilary Jenkins work in tandem with the art and colors to bring Black Badge #12 to life.  The color palette has moments of brightness against the mostly duller palette, especially in what feels like an inadvertent snafu where the pink chest pockets of the female Scouts are rather unfortunately placed.  Otherwise, they bring a sense of scale and pace to the story that befits the ending to the series, with each of the main characters getting their chance to shine and show off their skills one last time.

There’s a place for the happy ending in fiction, even in these depressing times.  That’s the beauty of fiction – it doesn’t always have to mirror our lives down to the gritty moments of despair.  It can instead uplift, invigorate and just take you away from the cares of the world.  This is doubly so when our heroes have earned their moment in the sun and are given the chance to atone for their mistakes.  Whether this is the end of the series, or the beginning of a new phase, Black Badge #12 is a fitting capstone to an entertaining storyline.