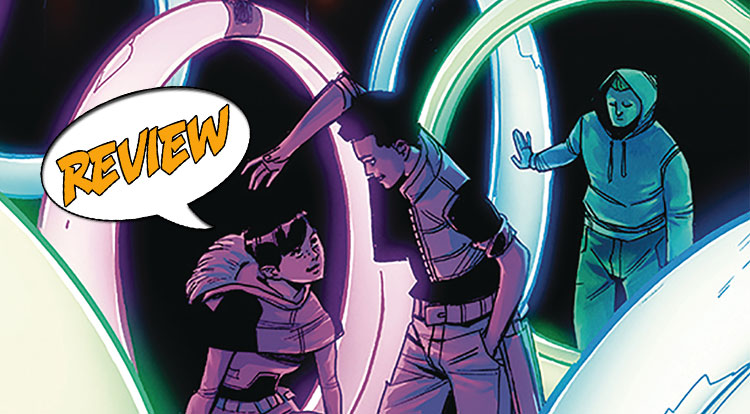 Secrets abound in Outpost Zero, but the bombshell of the day may be that Discovery Team has found traces of life. But how will people react to this news? Find out in Outpost Zero #11! Previously in Outpost Zero: Since helping Sam and Alea, Lyss has been having nightmares. She confides in Mitchell, who agrees to talk to Alea on her behalf. Alea and Sam, meanwhile, are beneath the Outpost talking to the robot, a caretaker which has adjusted its purpose to care for the cats. As the two young people keep talking to it, they learn about Earth, that their ship left there two hundred and forty-four years ago, and it crashed here a hundred years ago. Several of the crew died in the landing. The computer network has been dead since that time. And a comment the robot makes sounds eerily similar to Steven’s last words. Significant, or mere coincidence? The exploration gives them an idea where the power matrix must be, but then they realize they need to get back home – now with an incredible secret.

As Outpost Zero #11 opens, a couple kids are speculating on why there aren’t more cats around. Sam and Alea overhear this and share a glance. They’re eager to get back to exploring, but they have to bide their time. Alea also realizes that any communications sabotage that occurred happened around the time of the crash a hundred years ago. They may be the only people who understand what the Outpost is.

Alea’s parents sit her and her sister Ella down, which means serious family news of some variety. They share their own bombshell – that the probe they recovered shows evidence of life from a few thousand years ago. They trust the girls with this, and that they think this is too big and important not to tell people. Everyone deserves to know this, not just the Council.

Karen and Sam make some tentative progress in how they’re getting along. Mitchell talks to Alea about his concerns for Lyss. He’s still the same blunt, almost hostile Mitchell, but he shows he’s willing to trust Alea and Sam and what they’re doing. He doesn’t want them to stop exploring, but he wants to help Lyss.

Jann and Denis decide to make their big announcement just ahead of the next fights, the biggest gathering of people possible. And it doesn’t go as planned. People are people; under stress they can be fearful; under fear, they can retreat from anything new or perceived as potentially threatening. The more Jann and Denis stress the facts, the more people dig in accuse them of faking the information, all to get their jobs back. All that happens is that people become upset, including the Council, who now has to deal with this.

CONTROL OF THE FLOW OF INFORMATION

With its bold and straightforward linework, Outpost Zero #11 does a tremendous job this issue showing us the population at large and just how normal and human they are. It is a diverse population, which is cool to see, and it really does feel like a community. There are people of all ages, and they don’t have a cookie cutter feel to them. You can almost feel the mood in the arena change from the anticipatory excitement before the expected fights to fear and distrust.

It feels like life has returned to normal again in the Outpost. The artificial sky is back with its perfect days and lovely sunsets. Now that bucolic setting hides more and bigger secrets and even some of our expectations have been subverted. More and more we’re learning how little most people know about their background, about their technology, about the uninhabited space around them. Ignorance may be bliss, but could it bring down Outpost Zero?

Outpost Zero #11 is full of excitement and tension. The characters continue to grow, to evolve, and to surprise us, which makes it that much harder to predict what will happen next. It’s a drama that feels genuine with conflicts that are complex, because at its heart it understands that people are complicated.

The characters continue to grow, to evolve, and to surprise us, which makes it that much harder to predict what will happen next. It’s a drama that feels genuine with conflicts that are complex, because at its heart it understands that people are complicated.