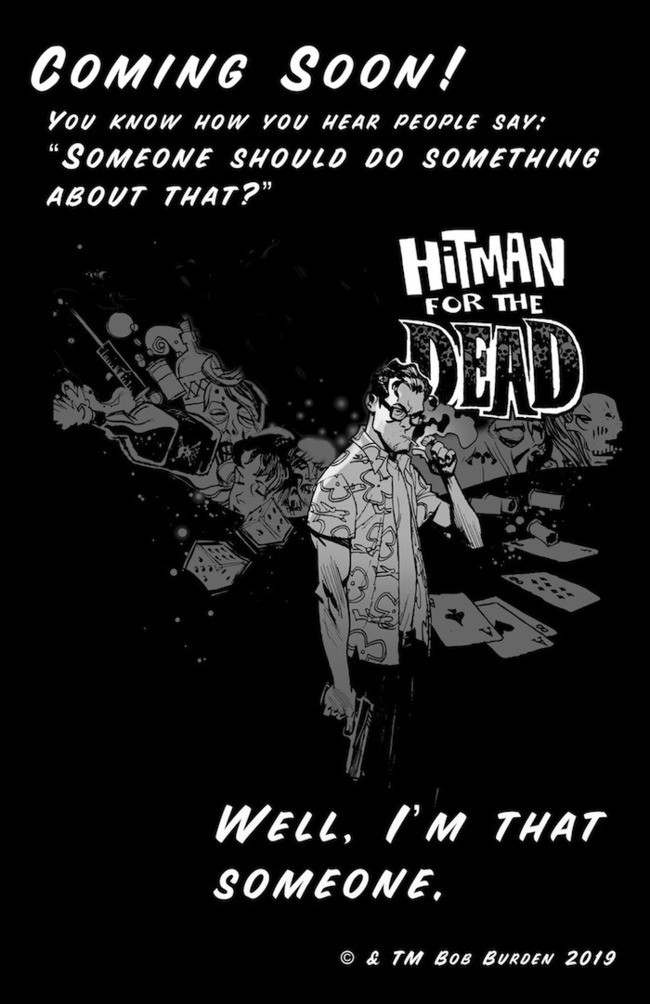 Dark Horse announces Hitman for the Dead by Bob Burden

Dark Horse Comics has announced that Flaming Carrot and MysteryMen creator Bob Burden is back with a new series, Hitman for the Dead. After losing his soul in a card game, a wayward, young Anthony Harken takes up with a crew of vagabond serial killers roaming America, administering one of the last surviving rituals of the Spanish Inquisition, avenging the wrongfully slain, and freeing their souls to pass on and find peace. He is the Hitman For The Dead!

Hitman for the Dead original started as a way to promote the new 400-page Flaming Carrot Omnibus that is scheduled to arrive from Dark Horse in September.

Burden, who will be at the San Diego Comic-Con signing paperback copy of the book said, “The story was an experiment. I wanted to change directions, blow out the pipes so to speak, and do a down-and-dirty hardcore thriller/horror/detective thing that would diverge from my humor stuff. Unlike Flaming Carrot, people instantly get what Hitman For The Dead is about and we feel it has a very viral potential.

I had a completed comic book script from a few years back – a good, solid story – but could I turn that script into a novel in the few weeks I had left in June and have it ready for San Diego Comic Con? I had to go for it. Originally called Silence Of Night, Hitman For The Dead was an idea that I had been kicking around for a while. Will it work as collateral promotion for the now obscure and seemingly forgotten Flaming Carrot and get it on people’s radar screens? It’s an experiment, and we’ll see how it goes.”

Hitman For The Dead is a radically different new series, not only for writer and artist, Bob Burden (Flaming Carrot, MysteryMen), but as a new departure for the comic world. At SDCC 2019 a limited edition Hitman For The Deadnovella in a vintage paperback format will be sold at the Dark Horse Comics booth as a prequel to the upcoming, unconventional new comic book series.

You can get a sample of the book at hitmanforthedead.com, with the full digital version of the book being made available for sale starting Sunday night.