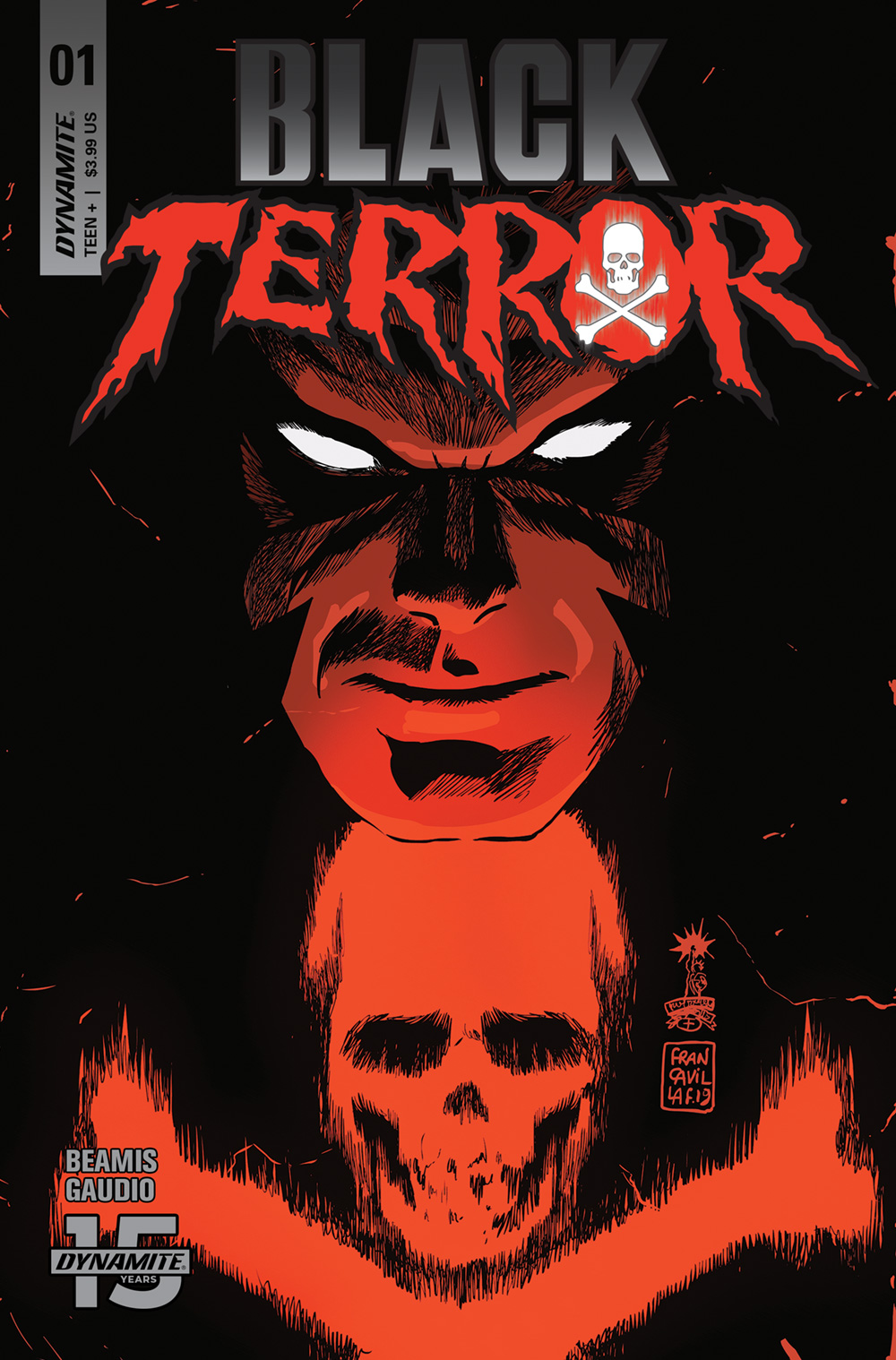 Max Bemis brings the Black Terror back to Dynamite Entertainment

The Nemesis of Crime is back in a new limited series by writer Max Bemis (Moon Knight, Polarity) this October!

In this series, Bob Benton aka the Black Terror, is living in the 1970s and contending with his post-war mental health as well as the rapidly evolving social landscape around him. Say Anything band frontman and acclaimed comics writer Bemis is joined by artists Matt Gaudio (John Wick, Bettie Page) and Ruairí Coleman (Cloak & Dagger, Turok). Rounding out the team on colors and letters are Brittany Pezzillo (Bettie Page, Green Hornet) and Taylor Esposito.

Each issue of the series acts as both the next chapter and a standalone deep dive into the Black Terror’s life and the chaotic 1970s setting. Fans can expect to see Black Terror’s infamous plain-named sidekick Tim, cult leaders, mobsters, experimental drugs and more. Bemis has described the title as a bit of an Alan Moore take, but less depressing and with some 70s Batman DNA.

Writer Max Bemis said, “I loved working with Dynamite on our take on Atari’s Centipede and they were kind enough to let my imagination run wild in terms of how I interpreted that world. They’ve let me go just as nuts with Black Terror, an awesomely designed and conceived vigilante who has never gotten a chance to venture into weirdness. If you’re a fan of Swamp Thing or Sandman and making a “conventional” superhero go all wacky, but maybe want a bit more humor with your psychedelic, this is the book for you!”

“Being able to work with Max and the whole creative team on this vision of the Black Terror has been an absolute pleasure,” said artist Matt Gaudio. “Those guys allowed me the freedom to interpret it as it played out in my head and I had a lot of fun with it, so I hope that comes through in the art! Without giving away too much, Bob Benton’s got a full plate, and readers are going to get a good look at what makes this guy tick as he deals with all the weird, messed-up things going on around him. It’s dark and it’s funny and it’s Black Terror like we’ve never seen him before.”

“It’s been so much fun drawing Black Terror thanks to Max,” said Ruairi Coleman. “His wicked sense of humor has me drawing some pretty outlandish things that I really didn’t expect. Yet he still manages to keep the stories engaging and meaningful. I can’t recommend this series enough – it’s shaping up to be something special.”

Editor Kevin Ketner added, “I was going to head the route of ultimate cliché and declare, ‘This isn’t your grandfather’s superhero!’ but…it is. It’s the same guy. Just in a different time and place, and we get to see him in a way that we haven’t before. Probably in a way that will make people hope no one they are close to is secretly a crime fighting vigilante. It’s bad for the knuckles. And everyone’s mental health. All that being said, the best part about working on this book is that I pretty much wear a black shirt every day already, so adding Terror’s skull and crossbones logo is not only easy, I can write it off as a business expense. Right?”

Dating back to the Golden Age, the Black Terror was created in 1941 by Richard E. Hughes and Don Gabrielson. Under the hero’s stark costume is pharmacist Bob Benton, who developed a formula which granted him powers. Often joined by his sidekick Tim, the pair vowed to stamp out evil during the war. Such legendary creators as Batman artist and Joker creator Jerry Robinson and world renowned novelist Patricia Highsmith (Strangers on a Train, The Talented Mr. Ripley) contributed to his original stories. His tales continue today in series published by Dynamite.

This terrific tale is wrapped in terrifying covers by some of the best artists in comics. Actually, they aren’t too scary. Francesco Francavilla (Shape of Elvira, Black Panther) contributes the most haunting of the bunch. While Jorge Fornés (Batman) has some fun with the skull & crossbones emblem for some pirate themed fun. David Nakayama (Spider-Man: City at War, Ant-Man & the Wasp) inspires some terror with his cover. Erica Henderson (Unbeatable Squirrel Girl, Assassin Nation) has Mr. Benton flying high. Adam Gorham (Rocket Raccoon, Jughead: The Hunger) rounds out the superpowered squad with a brooding rooftop Terror.

Black Terror #1 will be solicited in Diamond Comic Distributors’ August 2019 Previews catalog, the premier source of merchandise for the comic book specialty market, and slated for release in October 2019. Comic book fans are encouraged to preorder copies with their local comic book retailers. It will also be available for individual customer purchase through digital platforms courtesy of Comixology, Kindle, iBooks, Google Play, Dynamite Digital, ComicsPlus, and more!