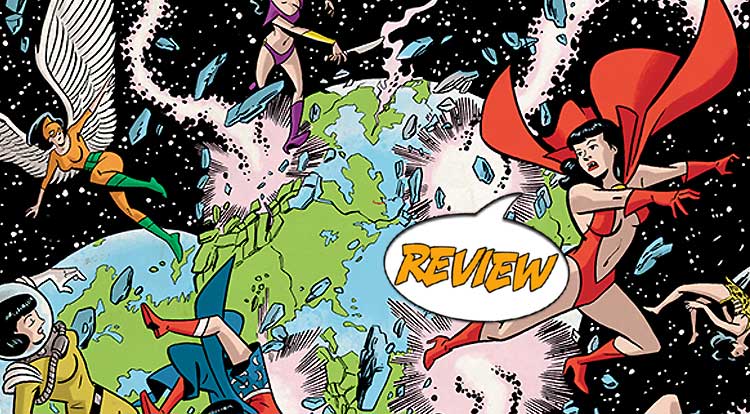 Previously in Bettie Page Unbound:  A new dimensional shift finds our heroine with sharpened canines, an eye-catching monokini, and a taste for blood… but if that’s what it takes to stop the Great Old Ones from destroying our reality, pour her a Type O plasma on the rocks!  The Crisis on Infinite Betties continues, and only our Pin-Up Protagonist can save the multiverse!

THE STORIES YOU NEVER HEARD!

So, here’s the deal: In the 1950s, pin-up queen Bettie Page was recruited by Unites States Intelligence agencies to serve as an undercover agent, during which time she discovered that the world was about to be invaded by The Great Old Ones. (That was thanks to a tip from the Loch Ness Monster, bee tee dubs, so you know that the information is legit!) Having secured two of the keys to reality, Bettie leapt through a portal in space and time, landing on a strange world where she is now, essentially, Vampirella. (Given that she spent last issue as an ersatz Red Sonja, it seems only fair.) Sadly, she is overwhelmed and captured by forces forking for Chief Inquisitor Benway, a counterpart of one of the jerks she previously stopped during her counter-intelligence work. After discovering that he’s a jerkass cult leader in any reality, Bettie uses her newfound vampiric powers to escape and confront the cult that’s trying to call up the demons from beyond. She arrives just a tiny bit too late, and is forced to face down the demonic presence, only to be overwhelmed and see Vampiron destroyed. Stealing the third key from the cultists, Bettie leaps between dimensions and finds herself astride a flying insect as the Princess of Xenon.

THIS IS WEIRD… BUT IT’S FUN

The underlying premise of this book, that Bettie Page’s heyday as model was also a time wherein she was a secret agent, is cute enough, but the addition of some Lovecraftian nonsense and dimension-hopping makes this pure comic book. On the one hand, it’s fun to see Bettie play dress up as other heroic types (though all three of them so far have been characters that Dynamite has publishing rights to, currently, which begs the question of why we’re using thinly-veiled analogues) but on the other, it feels a little recursive, playing into the meta narrative a little too much. That said, the glee with which this issue is written helps to pull readers in, and Ohta’s art is truly lovely. I like the fact that Bettie’s vampire costume has more coverage than the actual Vampirella slingshot bikini, as well, reminding us that it’s about the tease with Bettie Page.

BOTTOM LINE: I BELIEVE THAT THIS HAPPENED EXACTLY LIKE THIS

In short, Bettie Page Unbound #2 makes great use of comic book history and rules, providing readers with lovely art and a clever little story that makes our larger-than-life pin-up girl the savior of the entire universe, earning 4 out of 5 stars overall. It may not be for everybody, but for anyone who enjoys mash-ups, crossovers and our modern remix culture, it’s a very successful issue and one that makes me want to see how it all ends. Can you really ask for more from a comic book?

It's a difficult balance to play with a real character, multiple costume changes, universe-hopping and Yog-Sothoth, but this one pulls it off with aplomb.