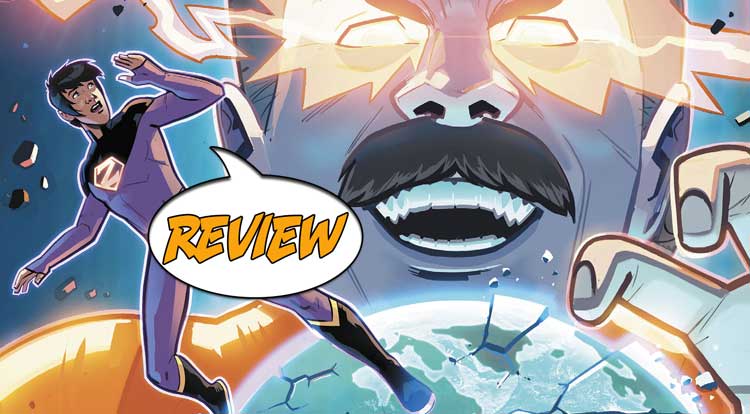 The Great Scramble is upon us and everyone’s life will change FOREVER…  unless Zan and Jayna can put a stop to it.  Your Major Spoilers review of Wonder Twins #6 awaits! Previously in Wonder Twins:  The Scrambler has given the world one month to fix everything-or else suffer “The Great Scramble,” a dastardly plot that would swap the consciousnesses of everyone on the planet.  As the scramble before the scramble commences, the Wonder Twins must team up with the Justice League to put a stop to the Scrambler’s plan!  But an unexpected twist puts Jayna in conflict with the Justice League-will she choose the path of justice even if it means losing her best friend?

YOU ALMOST SYMPATHIZE WITH THE VILLAIN

Last time, the minor villain known as The Scrambler put into place his final plan to actually, once and for all, change the world. By uploading his power into the internet, he will scramble the minds of every person on Earth into a different body, causing chaos across the globe. Naturally, panic ensues, and the heroes of the Justice League are in a mad dash to find where he is hiding. Sadly, Jayna already knows, thanks to a tip she and Zan picked up in Lex Luthor’s personal prison, and she also knows that her friend Polly Math (UGH) is helping him. Polly makes valid points as to WHY the villain has a point, including the fact that world leaders spend the entire 30 day build-up to the Great Scramble finally trying to create laws to address matters of poverty, injustice and social imbalance, worried that they’re finally going to end up on the wrong end of the stick. Jayna is torn about whether to turn in her friend, waffling for days over whether or not the good of the new world order would actually be better than the bad of possibly waking up in someone else’s body. She finally realizes that the new laws will take effect regardless, and mere hours before the change is set to take place, she rushes to tell Polly of her new plan…

…only to find the Justice League tearing apart Polly’s home.

NO LONGER NUMBER SIX OF SIX

This series, originally set for a six issue miniseries was recently extended to twelve issues thanks to positive response, and I can sort of see why. Stephen Byrne delivers a really beautiful issue of comics, where even the scenes of squalor behind bars in Luthor’s for-profit prison look lovely, and the moment where Zan explains how he saved the day by demolecularizing his powers is a really creative issue. It’s also easy to see Jayna’s anguish over possibly betraying her friend written on her face as she wrestles with her dilemma, which is truly impressive work. On the other hand, the message here is delivered with a sledgehammer, spray-painted with bright pink that says “SELFISHNESS AND CAPITALISM ARE THE PROBLEM.”, which makes the ending somewhat unsatisfying. The points are valid and even interesting, but the over-the-top satire works far less well than it did in ‘The Flintstones’, which had some issues with balancing politics with story itself. It’s certainly not a bad issue, and parts of it are quite good, but the complete lack of subtlety is wearying for me as a reader.

BOTTOM LINE: THIS IS… NOT SUBTLE

The final panel indicates that this part of the story may not be as over as the Justice League hopes it is, and I’m actually happy with that. I’d like to see Russell and Byrne have a little more space to work with these heady concepts, but that means that Wonder Twins #6 isn’t quite as good as I had hoped, even with strong and vibrant art, earning 3.5 out of 5 stars overall. It’s a book that doesn’t fail so much as it tries a little too hard to succeed, but its hard not to think that the writer feels that the work will be more important or transformative than a comic book can be expected to actually be.

I like the characters and love the art, but the story borders on self-parody rather than the surgical satire they're shooting for.