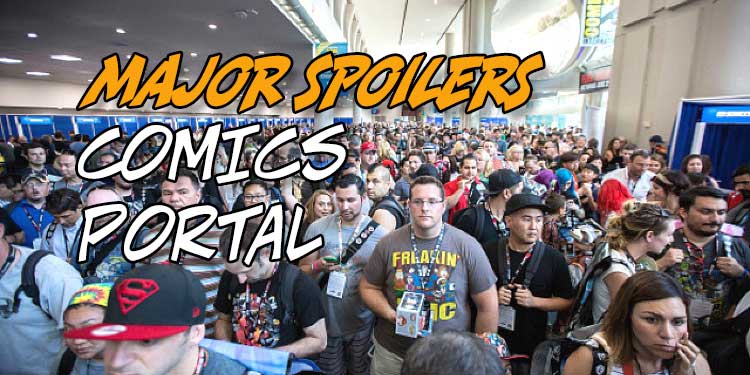 COMICS PORTAL: SDCC Is Upon Us!

This week begins one of those times that many comics fans look forward to with great anticipation: San Diego Comic Con (SDCC), held this year from Thursday, July 18th, through Sunday, the 22nd, with a preview night on Wednesday, the 17th!

It’s one of those events that shapes months after it, with many comics companies announcing major initiatives coming soon! All their planning comes to fruition during SDCC, and it’s the biggest newsmaker in the industry of the year, although I still enjoy New York Comic Con as well.

Of course, the folks here at MajorSpoilers provide the most thorough coverage of SDCC, and 2019 will be no different, so be sure to visit this site as often as you can to keep up with all the news that’s fit to post! Half the fun in getting ready for covering SDCC is making educated guesses about just what news we’ll discover in the days ahead.

ABC10 TV in San Diego does a good job on making predictions each year, and here’s what they think will be worth watching in 2019 as far as comics-related stories go:

As always, the Funko Pop folks will be releasing new figures, and there will be something in the neighborhood of 70 to 100 exclusives up for grabs.

While some news has already begun to trickle out, most releases will hit during the convention. Over the years, SDCC apparently has become more of a media convention than a comic convention, even though that’s in their name.

I often hear from fans who have attended San Diego Comic Con for years have said they see the comic book contingent of SDCC getting smaller and smaller each year. By some estimates, the comics portion of the big event has reduced down to about a quarter of the convention.

I’ve often noted that I prefer any convention that makes most of its income from media stars not use the name “comic con.”

I think that’s particularly important in this era when so many movies and TV shows are comics-related. After all, if there hadn’t been comics in the first place, it’s highly doubtful that the programs and films would even exist now. So comics are an important aspect of what the public is enjoying now.

We should be promoting the comics industry more any way we can, and that includes giving them the attention they need so they can continue to impact the entertainment we enjoy. I know a lot of people say this, but it’s so true and worth repeating: If you go to SDCC, you should be prepared. Take what you need to keep together, such as water and ways to keep your electronics charged and recharged.

What’s really important, and I can say this from personal experience, is to get ready to walk and stay on your feet for extended periods of time. That means you should exercise ahead of time as much as you can. Although you have only a few days left, it would be helpful to get starting walking at this point.

Even a few steps ahead of time would make a difference.

I can say that because, after my first SDCC, I spent about two weeks recovering. I was that blasted.

San Diego Comic Con can be a very special experience. Plan ahead, and it will be even better!

What do you think? Are you going to SDCC? If not, is there a local comics shop holding an event you could attend and celebrate comics? Whatever your opinion, be sure to share your opinion and thoughts in the space below!