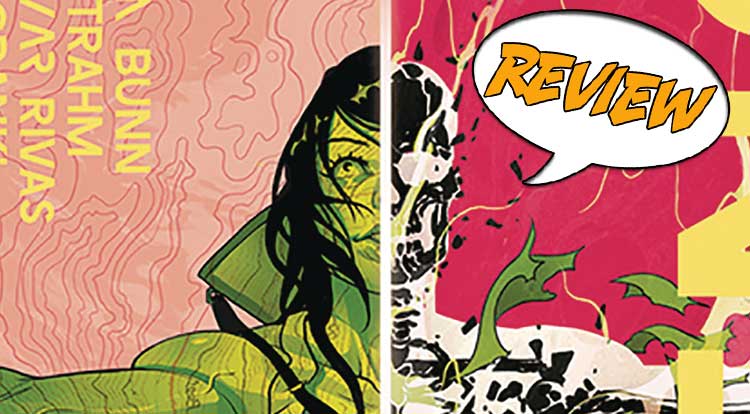 Grotesque mutations draw the US military to an isolated hospital in Mexico.  This rag tag bunch of misfits must face off against guerillas, insane mutants, and the terrifying depths of the underworld.  Will they survive?  Find out in our latest Major Spoilers review! Previously in Unearth:  Mitlan Itza, Mexico, is ground zero to a bizarre series of mutations that have drawn the attention of the US military.  It soon becomes apparent that whatever is causing the grotesques to occur is to be found in a series of tunnels deep beneath the earth.  But is the activity local guerillas the only thing the soldiers and scientists should fear, or is there something far, far more dangerous lurking in the shadows?

Cullen Bunn co-writes yet another horror title with Unearth #1 (I wonder what it’s like inside his head?  Probably plenty of screaming, no doubt) hitting the shelves with a bang.  Horror is a funny old genre – reviled a lot of the time, the shunned stepson of fantasy, yet it goes through periods of intense interest before imploding under the weight of its own craziness.  Happily, we’re going through a time where the interest in horror fiction and film/television is running along quite nicely, so it’s doubly pleasing to see this fine title being released.

Unearth #1 sets up the premise of the series in economical style.  In a hospital in a remote village in Mexico, a strange disease has begun to run rampant.  So outré are the symptoms, a mixed team (in the best tradition of Aliens) of soldiers and scientists are assembled to investigate.  We are quickly introduced to Drs McComick and Reyes, and Lieutenant Morris, a grumpy grunt who talks as straight as he shoots.  It soon becomes obvious that this is no ordinary disease – the strange deformations and bloating inflicted on the victims (plus the copious amounts of sticky fluid) are testament to that.

Bunn and his co-writer Kyle Strahm tread a fine line in snark and scares in this opening issue.  Reyes, as the doctor in charge, takes no prisoners, especially from the military men surrounding her.  There’s a delightful moment where a young local boy introduces her to Dr Hernandez, who she expected to meet at the hospital.  When the boy reveals exactly who Hernandez is, it’s a moment to laugh and wince (a lot).

Humor and horror go hand in hand – one lulls the audience, preparing them for the scares to come.  Unearth #1 isn’t loaded with laughter, especially as it nears the end of the issue, but it provides a break from the essential grimness of the story.  Events move at a brisk clip, from the hospital with its ghastly gallery of horrors, to an underground lair where signs point to something more dangerous than roaming guerillas.

LEAVE IT ON THE PAGE

Baldemar Rivas provides the artwork in Unearth #1.  His art is characterized by clean lines and expressive features.  It’s amazing what can be created with a combination of a few lines and shading.  Even with minimal dialogue in certain parts, the artwork and panel layout don’t leave the reader wondering.  Also, Rivas isn’t afraid to put the gross onto the page.  There’s a grim few panels near the start where Reyes’ dream is depicted in stark, bloody terms.  This is where the heart of the issue’s horror lies and Rivas depicts it skillfully.

Unearth #1 is a confident start to a new series that, while it won’t break the mold, can I think be depended on to provide solid, spooky entertainment.  There’s gross out aplenty for those with a taste for blood, while there’s plenty of deft character work that promises to unveil itself in future issues, and, I think, will provide fresh thrills and chills.  While the characters at this stage are only loosely sketched out, in time, I’m confident we will come to know them – and once we do, the stakes in the story will rise higher and higher as a result.

Unearth #1 won’t set the world of horror on fire, but it provides an interestingly blended cast, in an unfamiliar setting, that in the sure hands of Cullen Bunn, will provide a great deal of ghastly entertainment.