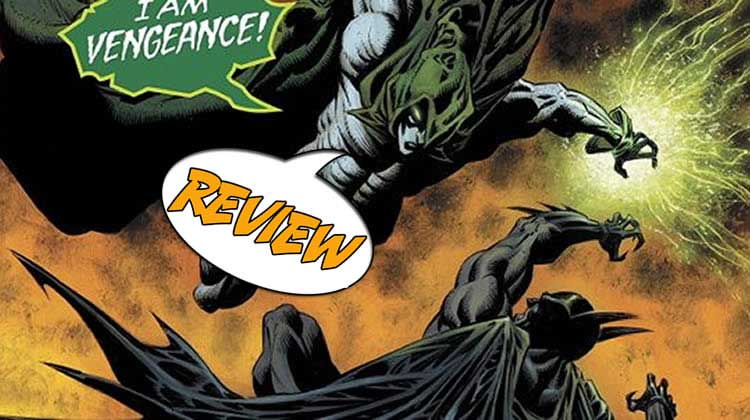 Long-time readers of Batman will remember his crossover title Brave and the Bold. Each issue featured the Dark Knight teaming up with another DC character. Man, I loved those books! I’ve missed seeing Batman interacting with other folks besides Superman and other members of the Bat-family.

DC has been reviving several of their established characters and groups, such as the Legion of Super-Heroes to Young Justice. The latest storyline in Detective Comics has focused on the Dark Knight and the Spectre “working” together. And it has been great! SOLICITATION: “The Spectre: Dead on Arrival” finale! In all of Gotham City, there’s only one life Batman would be willing to risk to save Jim Corrigan and the Spectre: his own!

THE HOST MUST DIE! LONG LIVE THE HOST!

One of the great tales in comics is when someone tries to control a character of tremendous power. For example, Superman has always been concerned that his mental abilities would be controlled since that is where he feels he’s the weakest.

With the Spectre, probably his Achilles’ heel is his human host, now back to being James Corrigan. (He’s had other hosts, including Hal Jordan, in the past.) In this story, the Cult of the Divine Hand is out to separate the two, which they feel will give them control of the Spectre and his powers.

All this takes place in Gotham City, and the Spectre pays a visit to the Batcave to ask Bruce Wayne for his help in saving Corrigan.

We get a fascinating retelling of the Spectre’s origin through Bruce’s eyes. We also see the Spectre’s interesting interrogation technique, gaining information that Batman himself couldn’t access. And then the Spectre gets angry when he finds the Cult wearing clothes resembling his own appearance. He lets them know that he doesn’t like that at all.

I’m always intrigued when someone can “out-Baman” the Dark Knight, and we see Bruce’s humanity being a hindrance when the Spectre is around. Tomasi likes to challenge Batman, and that makes for a great read!

The pacing is quick, and the dialogue is gripping. I know some people who don’t care for the supernatural in comics, but many others do. This issue gives the latter a great story, something even the former can enjoy, I believe.

DARK ART THAT FITS THE STORY

The dark and moody art provided by Hotz really works well with Tomasi’s script. He draws the Spectre with shades of black that accent his white and green colors well. I also like his Batman, although he seems to draw inspiration from Kelley Jones when it comes to the tall ears on his cowl.

Hotz’s facial expressions and appearances were also great. He makes the action sequences flow very well, so a great job all around!

BOTTOM LINE: Vengeance and The Night

Sometimes I get a little frustrated when different artists are working on a comic, often in just one storyline. This book was a perfect example of how DC takes advantage of using different creators to tell different kinds of stories.

I’m also glad the numbering is continuing after 1,000. I was worried they would once again go back to a number one, but I think using these unusual numbers—after all, how many reach 1,000 anyway?—is a plus and not a minus overall.

Tomasi is one of those great Batman scripters who can take that hero just about anywhere and tell an excellent story. I hope he’ll be around for a long time!

The latest storyline in Detective Comics has focused on the Dark Knight and the Spectre “working” together. And it has been great!