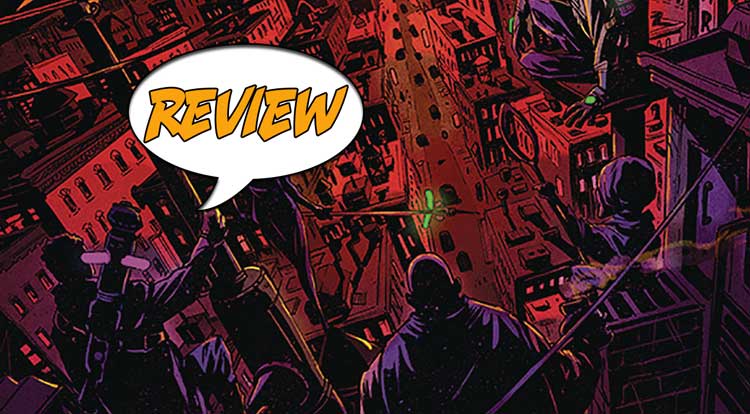 There were dark days in America’s past, but through them all the Sangeryes were there. Find out more about this amazing family in Bitter Root: Red Summer Special #1. Previously in Bitter Root: During the days of the Harlem Renaissance, the Sangerye family works to heal the Jinoo (people transformed by fear into monsters) terrorizing the African American community. Their lives are complicated further when two newcomers from Tulsa, Dr. Sylvester and Miss Knightsdale, arrive on the scene. While the Sangeryes try to cure Jinoo, Dr. Sylvester wants to kill them. But things take an even nastier turn when gateways start letting actual monsters through to Earth in one of the best comics out there.

I WAS SPELLBOUND AND CRYING BY THE END

It has been such a hard wait, but Bitter Root: Red Summer Special #1 has arrived to fill the hole left in my soul after the end of the first story arc of Bitter Root. This book fearlessly looks at some very dark times in American history and weaves a story around them that is terrifying, appalling, and heroic.

Who are the Sangerye family, besides monster hunters? This book pulls together key moments in the lives of all the main characters to show us, throughout American history (albeit some parts that are not taught frequently enough), more about what makes them who they are. Violence against African Americans is front and center, but this set of six stories deftly covers a broad range of emotional highs and lows.

This is a 45-page collection that is well worth the cover price. Every story is a gem, and I’ll just discuss a few of them. The first story takes place in Maryland in 1850. A small group of people are making their way north, and among them is a young woman named Etta. They are chased by what they think are slave catcher dogs, but instead they’re Jinoo. Etta steps up, staff in hand, to fight them off as best she can. (Knowing her from the 1920’s, when she is older and dead-set against women fighting, this adds so much to her character.) They’re losing ground when three mysterious, well-armed people show up, this is her first meeting with a Sangerye. I love Ma Etta so much.

The story of Tulsa, Oklahoma (May 31, 1921) is horrifying. The Tulsa Race Massacre is a historical event where a prosperous African American district of the city was destroyed, claiming the lives of anywhere from dozens to hundreds of people. Against this backdrop, Dr. Sylvester is running with his two small children in tow away from an incendiary attack. In the ensuing explosion, his little girl is killed. Then he is injured and his little boy is also killed. Miss Knightsdale, a stranger who tried to help his little boy flee instead finds his broken body, and in her grief and rage transforms into the birdlike monster she can become. It is powerful and heartbreaking.

“Ladies’ Night” is a charming tale set in 1924 Manhattan. Here we see Blink in her natural element as a stylish monster hunter. She is joined by her friend Wu, from Chinatown, for a night of tackling monsters. They briefly commiserate about having to sneak out and having family who would prefer that the girls stay home instead of doing what they love. This is such a fun story, and seeing these two ladies kick ass is absolutely marvelous.

Several artists contributed to Bitter Root: Red Summer Special #1. They have a variety of styles, and they’re all solid. The characters are recognizable. The various depictions of the Sangerye equipment and weapons are creative. The coloring is truly lovely. The art brings the stories and characters to life and I liked them all. My personal favorite is still Sanford Greene – the movement and emotion in his art are so powerful it takes my breath away.

BOTTOM LINE: THE PERFECT INTERLUDE BETWEEN VOLUMES 1 AND 2

If you haven’t been reading this series, you could pick this up and get great introduction to the world, the characters and the action. If you have been following it, this will whet your appetite for issue #6, which should be out in the fall. This is one of the best series I’ve ever read with some of the greatest characters around.

Catching up with the past is a cool way to get us ready for the next volume of Bitter Root!