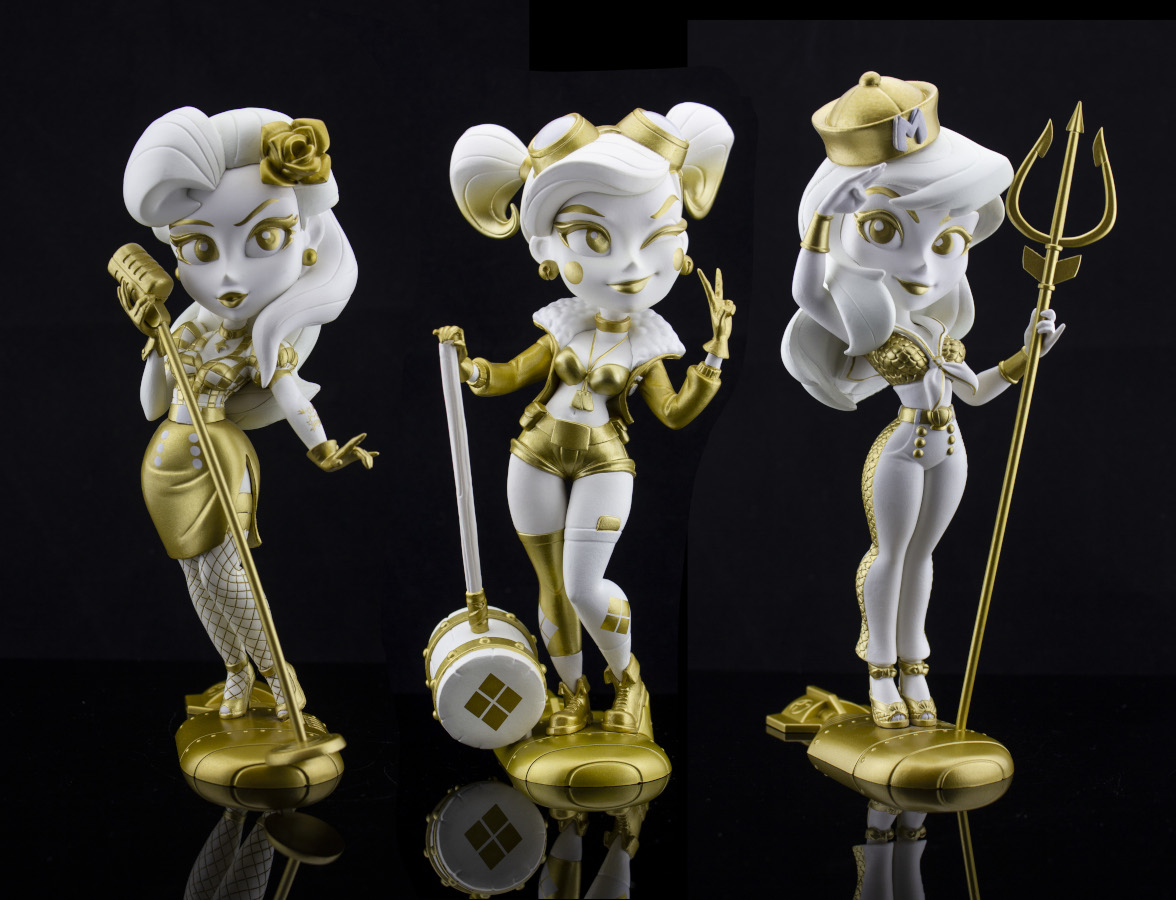 Cryptozoic Entertainment has announced its list of exclusive collectibles and trading cards it is bringing to San Diego Comic Con 2019. War (CryptkinsTM: Series 2): This is a variant of the Unicorn Cryptkins vinyl figure, part of Cryptozoic’s original IP depicting creatures from folklore and tabloid headlines. It is the second in the Four Cryptkins of the Apocalypse variant series, featuring characters that seem, at first glance, to be harbingers of doom. The figure has red paint and three streaks of warpaint to underline the character’s associations with fire, war, and the end of days. The 2.25-inch collectible comes packaged in a miniature crate with a foil sticker marking it as “Exclusive Species” and includes a Bio Card. Only 300 figures exist, with each selling for $15. Ravishing Red Raven (DC Lil Bombshells: Series 3): This is a variant of the Raven vinyl figure from Cryptozoic’s retro-style DC Lil Bombshells line, which showcases DC’s favorite female characters (and a few male ones). The latest in Cryptozoic’s Ravishing Red series of variants, it sports an eye-catching metallic red costume. Each figure is individually hand-numbered (1-300) on the bottom and includes Raven’s logo on the base. The 2.75-inch collectible comes packaged in Cryptozoic’s signature, collectible tin with a foil sticker marking it as exclusive. Each figure will sell for $25. Black, White, and Red All Over Harley Quinn and The Joker (DC TeekeezTM): These are variants of the vinyl figures from Cryptozoic’s DC Teekeez line, which is inspired by tiki culture and features iconic DC characters. Harley wears a black, silver, and white costume and The Joker shows off his black suit and red bowtie (plus white teeth rather than his usual yellow). The 2.625-inch collectibles have a distinctive wood-carved aesthetic and come packaged in a window box with a foil sticker marking the set as exclusive. Like all DC Teekeez, they are stackable. Only 300 sets of figures have been produced, with each set selling for $20. Golden Goddess Cammy (Street Fighter Knockouts): This is a variant of the regular Street Fighter Knockouts vinyl figure, part of Cryptozoic’s collectibles line starring the powerful women from the video game series. Like the previous releases in Cryptozoic’s popular Golden Goddess variant series, this figure showcases an eye-catching gold-and-white design inspired by classical Greek sculpture. The 7-inch collectible comes packaged in Cryptozoic’s signature window box, each of which is individually numbered from 1 to 350, and will be available for $40. Wonder Woman Movie Collectible: Based on the recent portrayal of the Super Hero on the big screen, this figure reflects the power of the iconic Amazonian princess, as she wields a sword and wears her trademark armor, seemingly ready to battle at a moment’s notice. Premiering at San Diego Comic-Con, it features the Wonder Woman logo on the base and is packaged inside a display-worthy window box. Moreover, Barnes & Noble and Cryptozoic are partnering to release Wonder Woman Movie Collectible Noir Edition, a limited variant of the figure that has a stylish gray color scheme, inspired by film noir. The Summer Convention Exclusive will release simultaneously at Cryptozoic’s booth at San Diego Comic-Con and Barnes & Noble stores across the nation. Each version of the figure will be available for $29.99.

Vinyl TerrorzTM: Freddy Krueger: The recently released first figure in Cryptozoic’s new horror-themed Vinyl Terrorz line depicts the villain from the A Nightmare on Elm Street film series with his iconic glove, fedora, and burned face. The 7-inch figure comes inside a display-worthy window box. In addition, the company will be selling Vinyl Terrorz: Freddy Krueger Shadow Edition, a variant that is a Cryptozoic Exclusive and features a heavy dose of black, underlining Freddy’s association with the darkness of night. Only 350 figures have been produced, making it extremely limited. The core version will be available for $29.99. The Shadow Edition will sell for $40 and, for those unable to attend, is also available on the company eStore right now. Rick and Morty Trading Cards: Metallic Card Pack: These cards are printed on high quality metal and are designed to look like business cards belonging to characters featured in Adult Swim’s Rick and Morty. Collectors will get three random Metallic Cards (M4-M9), plus a top-secret fourth Metallic Card (M10). Only 100 limited edition packs will be available for $25 each.