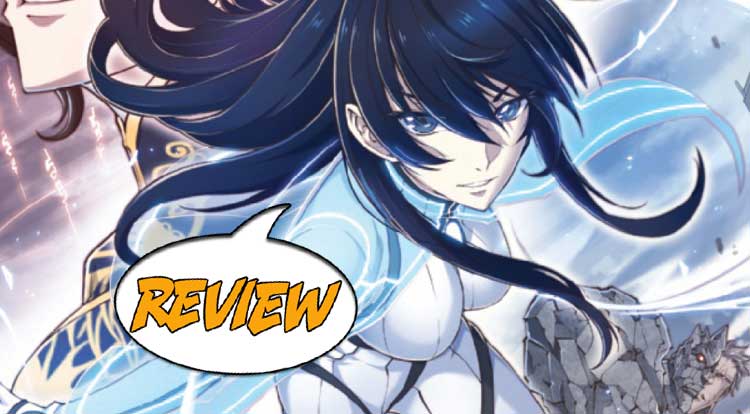 With the power of wind at her command, Lei Ling is the master of the sky!  Your Major Spoilers review of Aero #1 awaits! Previously in Aero:  What strange forces have turned the buildings of Shanghai into monstrous golems? And what is the secret origin of Wave?

This issue opens in mid-fight, as Aero faces down a monster of her own creation!  Sort of?  Something has animated a building that she, as architect Lei Ling designed and built, and Aero has to use her aerokinetic powers to fight it off while protecting the city.  Flashback a few hours and we see Ling at work, realizing that she’s late for a date, briefly get an introduction to her boyfriend and cut back to the fight.  It’s interesting to see the use of her powers and how creatively she takes down the skyscraper-golem, but as soon as it falls, two more rise to take its place!  In our second tale, which takes place in the aftermath of the War of the Realms, Aero receives a medal for meritorious service, only to find out that her friend and colleague Wave has gone missing.  Seeking her out, she finds that Wave has been ejected from Triumph Division, the Filipino super-team, and the bond a bit as Wave tells Aero her origins.  As the story ends, Red Feather, the leader of Triumph Division arrives to confiscate Wave’s equipment, only to find that he has TWO heroes to deal with.

AND THE ORIGIN OF WAVE

The first half of this story is represented in English for the first time, and it’s really fascinating to see the differences between Western and Eastern storytelling tropes.  The introduction not only gives us the requisite look at her powers and costume, but makes sure that we know about her life, her romances, and even Shanghai itself, an important part of her back story.  Keng’s art is dynamic and detailed, requiring (at least from me) more attention and consideration than some American comic backgrounds.  Even when we get Pak and Mhan’s second tale, the art feels different than your average Marvel comics joint, with the slightly-more-photorealistic take that see see in Marvel’s domestic titles still getting an edge that feels different.  The second story feels much less sure of itself in some ways, and there are moments that feel a little off for me (the proportions of Mhan’s Aero are much more… pneumatic than in the lead story, which si quite distracting) but the ending makes it clear that there’s a lot of potential to be had in these stories.

For years, the joke has been that every Marvel story takes place in New York, so I’d be willing to consider this a successful book solely on the basis of it branching out from Midtown Manhattan.  Fortunately, Aero #1 makes for a good read, with both art teams delivering the goods (though I like Keng’s art a bit more) and interesting story to flesh out Aero, Wave and their world, earning 4 out of 5 stars overall.  Fingers crossed that this one sticks around for a long time, as this setting and this hero shows a lot of interesting potential and has already expanded the Marvel U in a positive way.

The coloring is top-notch, the art is strong and even the parts that don't quite work are pretty okay, making for a book that I hope to see selling like hotcakes, presuming that hotcakes still sell well.