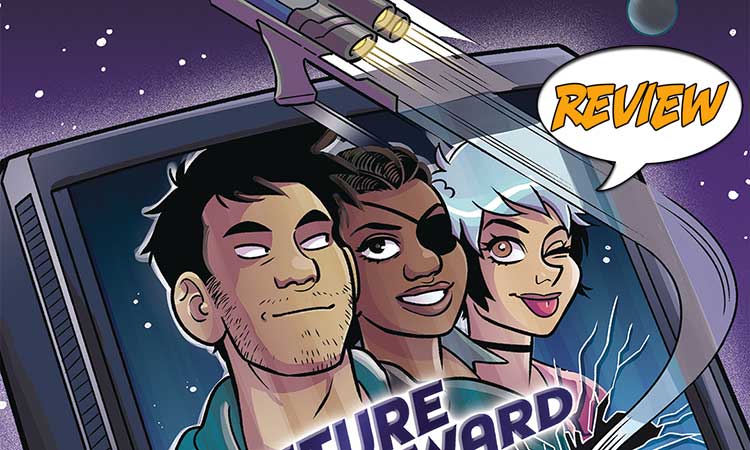 At the epicenter of a small apocalypse, one convention goes on. What fiendish plots and machinations underlie it all, and who is behind it? Find out in The Long Con #10! Previously in The Long Con: Dez and Victor make their way to the Tribunal Hall, where Dez has an elaborate plan to get judged, fail, get thrown down the Shaft of Total Retcon, and get to the maintenance tunnels. The Grand Gatekeeper, Judge Decky Declan obliges. Victor challenges him and must answer a series of Skylarks trivia questions, which he does with ease. Victor gets taken upstairs to the Writers’ Room, and Dez gets tossed down the shaft, where she runs into the resourceful Anton again, and we learn his backstory as a Cold War era spy. All signs point to the Special Guest, and all roads lead to…the Inner Sanctum.

TYING UP LOOSE ENDS WITH PANACHE

The Long Con #10 opens on the Inner Sanctum where the Special Guest, the creator of Skylarks, is sitting at his desk working. Everyone in the doorway is moderately stunned, and while they’re trying to decide who should punch him, he fills them in. One fateful day, he obtains a navy surplus computing device to be M.A.R.L.A., the ship’s computer. It can even be programmed to run its own light sequences. And somehow today he seems really concerned about her.

M.A.R.L.A. became more than a prop. They found they could load scripts into her. As the show grew, she became the show bible, with the advantage that she was mobile. As the years went on, she learned more and more and became the de facto expert in Skylarks. To further complicate things, the creator shared some information with the government during the late Cold War years, and M.A.R.L.A. picked up a thing or two. Nothing could possibly go wrong with this, right?

But time passed. Skylarks became the most successful franchise ever. And the real world caught up with the year which was fictionally the origin of the show. In an attempt to make our reality match up with Skylarks continuity, M.A.R.L.A. caused the apocalypse at the Convention Center. (To be fair, it was a secret military installation which was a nuclear missile silo, and why wouldn’t a practical A.I. take advantage of that?)  And she’s not done yet! She has a spaceship nearly ready to go. Unless somebody tries to stop her.

Cue the battle of terrific surprise entrances. Victor, Dez, and Loren face off against the ship’s crew. Decky Declan arrives with Skylarks in tow. Dez calls on Megyn and the Fangirls. The superhero contingent shows up, as well as both Chips Nimitz. We get some Mantoids, and Anton steps in with the zombie celebrities. This is so satisfying. This has all been built up from the beginning for the big payoff, and it is grand fun.

They get the ship – but that doesn’t stop the countdown. M.A.R.L.A. is a tougher opponent than they realized, time is running short, and everyone has run out of ideas. Victor and Dez have a heart to heart and I love it. It is exactly not the big romantic cliché that we would expect, and that makes me happy. They’re honest, they’re mad, they’re realistic because they think they’re going to die in a few minutes, and they realize that they’re still friends.

And then…and then…Dez comes up with an idea that just might work. Oh, and there’s a heck of a punchline too.

This was such a crazy ambitious story with so much going on. It has been a delight from start to finish. I think the creative team pulled off a terrific ending, managing to tie in pretty much everything and everyone we’ve run into, and I found it very satisfying. I laughed, I cried, I groaned – especially that last one.

The art of The Long Con #10 is terrific. It does some heavy lifting when we learn more about M.A.R.L.A.’s past. As the narration fills us in, the art goes travels through time with scenes of the set of Skylarks through various episodes. I like seeing how M.A.R.L.A. evolves from the large metal cylinder blinking lights, to ones with better and better video screens. The creator changes and ages over time, as does the crew.

The fight scene panels have so many funny moments in them. (I love when the Mantoids get attacked by the service dogs.) Decky even scoots in on his special seat, which is so goofy but so perfect. The two Chips Nimitz are delightfully goofy.

BOTTOM LINE: CAPTURING HOW EXHAUSTING A CON CAN BE

If you love your fandom, and you have ever attended a con, The Long Con #10 brings us full circle with great panache. The creative team has been on top of their game throughout. The ways they have found to blend the television show with the reality of the Con, as well as spoofing practically everything you might see at a convention, are truly remarkable.

If you love your fandom, and you have ever attended a con, The Long Con #10 brings us full circle with great panache.