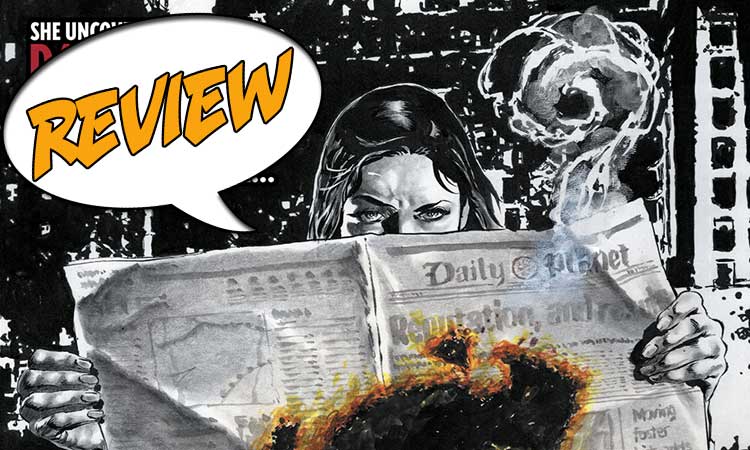 90%
90%
When a comic features Lois Lane drinking booze from a coffee mug, you buy it pronto!

You don’t have to be Superman to be a shining paragon. Sometimes, you have to get your fingers dirty and work in the shadows to find the information that brings down the corrupt, and upholds the best of what America is. But does the cost have to be so high?

The beginning of a new series featuring ace reporter Lois Lane.  America is coming apart at the seams as an administration built on graft and corruption lurches from one crisis to another.  Daily Planet investigative reporter Lois Lane is in Chicago digging up malfeasance on a grand scale, fighting the good fight for Truth, Justice and the American way.  Can she shine a light on the forces arrayed against her?   Find out in our stunning Major Spoilers review! Previously in Lois Lane: Despite being a wife and mother, Lois Lane isn’t an ornament on her husband’s arm, nor a stay at home domestic.  In an America that mimics our own, Lois Lane lives up to the highest of journalistic ideals – shining a light on corruption, digging up the truth, and laying it out for the people to make their own judgements.

TYPEWRITER OF THE GODS

With the chapter title Enemy of the People, Lois Lane #1 for some might expose the political leanings of its writer, Greg Rucka.  But the title cuts both ways.  As evidenced by the murder of a Russian colleague, Lois Lane is a member of a select group targeted by the government.  And doubly so with members of the public throwing cheap shots at her in public.

Lois Lane #1 is the opening salvo in a 12 issue run  It begins as it means to go on; stripped, lean, and not taking prisoners.  Lois is in full investigative reporter mode when the issue opens, with nary a sight of Superman.  She works the phones, tapping her contacts, and punches up a story that has Perry White ringing her back in a pink fit.  This opening issue feels very much like a noir story, with Chicago providing the brooding backdrop and Lois venturing into parking garages to converse with a figure lurking in the shadows.

When Clark Kent does show up, it doesn’t upset the balance of the issue.  Lois remains the centre of attention, with Clark following her, and not the other way around.  It gets hot and heavy, surprisingly so for a mainstream DC title, but it’s tastefully done and demonstrates that this power couple are completely at ease with each other, and are the equal of the other.

RIPPED FROM THE HEADLINES

Rucka isn’t afraid to deal directly with the political climate in the US at the moment.  While this may date the series in the future, right now it gives it a vitality that grips the reader.  Sure, the Administration is mired in corruption and graft.  Sure Lois is investigating children in cages.  Sure, the White House Press Secretary sees her job as being how many questions she doesn’t answer.  Not everyone will like the approach.  Tough.  Art isn’t there to please you.  Like the truth, it’s there to challenge you, to make you look at the world through the eyes of others, to confront your own beliefs and prejudices.  To do what has become seemingly harder and harder these days – to walk in the shoes of another for a time.

And in using the current mood as a backdrop, Rucka has firmly anchored the story, giving it and his characters a solidity that might otherwise be lacking.  Through the murder of a Russian journalistic colleague, Lois herself is also under threat.  Happily, she doesn’t shy away from what she believes she needs to do, giving the character the sort of heft required for the role.  Of special delight is seeing Lois drink scotch straight from a coffee mug – as old school an image of a crusading reporter as you’re likely to see in comics today.  Lois Lane #1 sets the tone, and future issues will no doubt continue in the same vein.

Artist Mike Perkins’ work matches the writing.  Chicago has a reputation for corruption equal to New York, and the gritty, shadowy rendering of that city is entirely in keeping.  The lack of superhero theatrics means Perkins can concentrate on the here and now, with gloomy, rain-filled panels and darkened, threatening parking garages the norm.  Rucka’s writing in Lois Lane #1 would be nowhere near as strong without Perkins’ art and it’s a partnership I’m looking forward to renewing in future issues.

Journalism has a bad reputation these days.  With the population seemingly divided into self-sustaining echo chambers, it’s even more imperative that readers have strong examples of fearless journalism to remind us what the truth actually is.  Sure, Lois Lane #1 might only be a comic, but it is a damn fine one.  I wouldn’t be surprised if there’s more than one reader out there inspired by the depiction of Lois Lane as a strong, independent and fearless journalist willing to dig up the truth, in service of the sort of ideals that America once upheld, and may once again uphold.