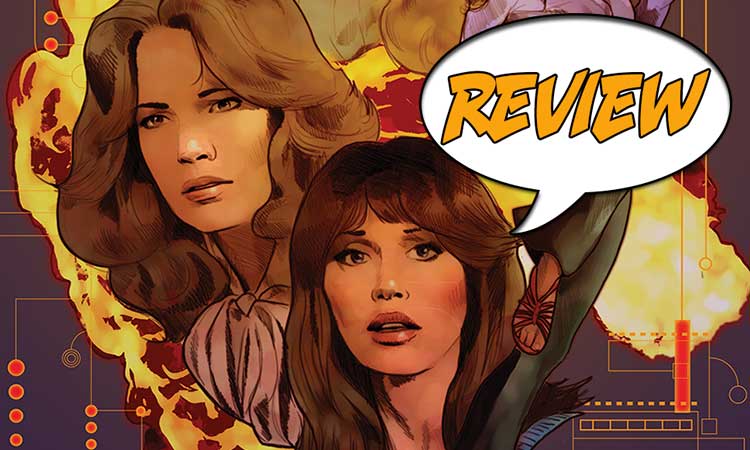 Charlie's Angels vs. The Bionic Woman #1

In the era of big hair, it’s three against one when Charlie’s Angels come face to face with Jaime Sommers.

Undercover operations will never be the same when Kelly, Kris, and Julie face off against Jaime Sommers in Charlie’s Angels Vs. The Bionic Woman #1! CHARLIE’S ANGELS VS. THE BIONIC WOMAN #1

Welcome back to the 1980’s, when Charles Townsend has a detective crew of Kelly Garrett, Kris Munroe, and Julie Rogers working for him as the Angels. They’re always up for adventure and a bit of espionage. This is also the time period when Jaime Sommers, the Bionic Woman, is around and working a one-woman security detail. They’re all strong female protagonists in an era before they were mainstream – and they’re on opposite sides of the same job!

Charlie’s Angels vs. the Bionic Woman #1 opens with an attempted break in at Naris Corp., a defense contractor. This is an establishment walled off like a prison, and apparently guarded by Jaime Sommers.

In the spirit of classic television shows of the era (or a little earlier), we jump cut to the Angels and Bosley. Again in that spirit, the timeline of the story jumps around a bit. As an espionage tale, the plot is convoluted, and it took a couple reads to get things straight. The MacGuffin is chemical formula that was developed by a government agency and subsequently sold off to a private contractor. The compound could potentially be used to cure paralysis (rather vague and medically improbable, but okay)…but it can also grant people superhuman abilities for a short time period. (Calls for some suspension of disbelief, but for these characters, I’m willing to do so.) The patent for the formula still belongs to its inventor, and he wants it back.

The Angels need to infiltrate Naris Corp., and they do some detective work in disguise as well as having Kris charm a young man into helping her get a listening device planted.

Meanwhile, Jaime Sommers has apparently been detailed to guard this secret and protect it from being stolen. It also appear that she somehow overheard Charlie talking to the Angels (from Charlie’s end), so she’s on her guard. We do see her in action against the intruders we saw at the open, and it sure is nostalgic to see her bionic hearing and jumping come into play. These guys are easily intimidated, and they promise never to come back if she lets them go.

But that puts Naris Corp. on their guard. Jaime is formidable, but they’re calling in other big security guns. The Angels don’t have much time to act, so Kris manages to connect with the young man she charmed earlier and gets him to let her in. This is not overly sophisticated, but then, it is the 1980’s. She had the other Angels in her trunk, and they all get out and don ski masks in an honestly very funny scene, as they are still in their fashionable clothes – shorts and a jacket; a midriff baring top; and a halter jumpsuit. At this point, Jaime confronts them.

The art of Charlies Angels vs. the Bionic Woman #1 is distinctive and the line work is interesting. There’s a lot of texture, such as fabric creases in clothing, shadows, and hair.  It looks to me like the penciling is heavily reflect in the ink, and it is a pretty cool look. The characters do not bear particularly strong likenesses to the actors who portrayed them, but that’s okay because we can tell who they are. What I really like is that while these are sexy women, they aren’t portrayed in a cheesecake style. Plus there are some definite nods to fashion of the time, which is a kick.

Thank goodness for distinctive hair styles! Besides the Angels and Jaime, there is also a secretary at Naris (and three bikini girls with Charlie). The men in this issue are pretty incidental as a whole, which is probably one of the first time’s I’ve been able to say that. I do like the lettering, and they seem to be having fun with the bionic sound effects – again, cue the nostalgia.

BOTTOM LINE: SET UP TO AN INTERESTING CONFLICT

While the plot devices are a little vague, and the set-up is a little contrived, that’s not the point of Charlie’s Angels vs. the Bionic Woman. I think we’re all looking forward to their direct confrontation, and this issue delivers us right to that point. It’s fun, it plays with a lot of the tropes we love, and it certainly is a jumping on point.