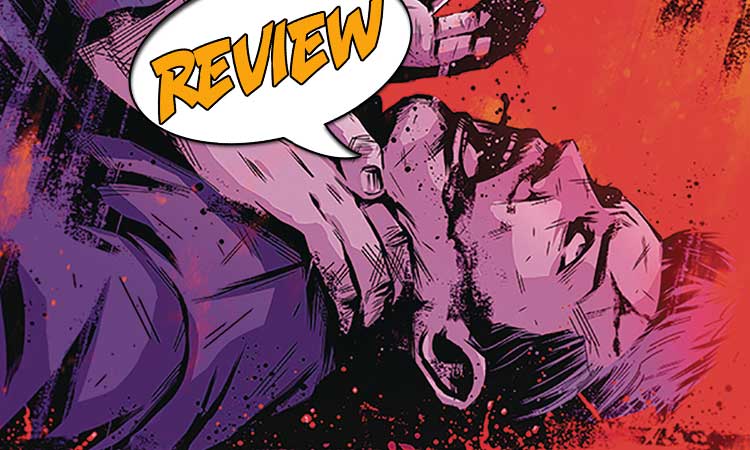 This is it, the final chapter. With the city in flames and his loved ones in peril, Locke confronts the weapon of destruction known as Roach Riley. I really can’t think of more ways to say it, this is one you don’t want to miss.  I check out SPENCER & LOCKE 2 #4 from Action Lab – Danger Zone and I may need therapy afterwards. On shelves July 3rd! Previously in SPENCER & LOCKE: Locke survived not only being buried alive under a ton of rubble after his last confrontation with Roach Riley, but the perils of his own mind. Now, with his daughter in tow and his big fuzzy panther partner at his side, he is on the prowl to stomp a bug. Little does he know the woman he cares for, Melinda Mercury, is in an equal amount of danger as she confronts the architect behind the weaponization of Roach Riley and the destruction of the city.

THERE IS A SAYING ABOUT CURIOSITY AND THE CAT…

Roach Riley had been a prisoner, of war or not does not matter. During that time he was forced to do horrific things to stay alive, make choices which no one should ever have to make. When his fellow soldiers finally rescued him, he was changed. Maybe if his imprisonment had gone differently, if he had not committed such acts to live and see his rescue, Roach Riley would have been able to deal with what came after. He wasn’t the same though, and the once chance of gaining regain normalcy was taken away as he stepped from the plane expecting a welcome from his family. What he got was the news that his wife had died, and his unborn son with her.

Locke knows none of this. To be honest, it is questionable if it would have changed his course of action. Would he have treated Roach Riley any differently if he had known the ingredients that formed a monster? Would any of his own backstory have made him more sympathetic to the hardships and pain the other man suffered? The point is moot. Roach Riley has assaulted the city, attacked his person, and most damming of all, brought Locke’s own daughter into the conflict. Locke and Spencer prepare for the confrontation to come, and Locke begins to wonder at which point a hero become a monster.

Riley’s trail leads to the hospital. Armed with a flamethrower and his own insanity, he advances on the maternity ward. Spencer and Locke are not far behind, but will they make it in time?

Across town, Melinda Mercury, intrepid reporter, has found her instincts have failed. She thought she found the hand behind Roach Riley’s actions in the form of his sister, Lana Forrester. All too late she discovered it was actually Lana’s husband, Hal Forrester, who provided the impetus to fuel Riley’s rampage. He had went to meet Riley at the airport upon his return and found a broken man. But broken things can be molded for new purposes, and Forrester hatches a plan to allow him to finally clean-up the city, even if he had to destroy it in the process.

While Spencer and Locke are confronting Riley in the hospital, will Melinda be able to rescue herself and the innocent Lana, or will a mad man reign on all fronts?

…BUT CAN MADNESS EVER BE SATISFIED?

I’ve been following this series since the beginning and honestly, it is one of the best things I have read in the past year. David Pepose’s writing has been amazing. The overall story is deep, the characters are realistic and heartbreaking, and the plot twists are enough to give Chubby Checker a broken back. This one of the most enjoyable and satisfying stories come out in a long time and I sad to see it end. The overarching concept of the story has been inspired. You truly have a unique combination of the funny pages, the darkest crime noir and a psychological thriller all thrown into a blender and set on puree. You heart aches so badly for the characters! I cannot wait to see what is next from Pepose. I am sure it will be a barn burner.

What can I say about Jorge Santiago Jr’s art? It is amazing. He keeps up a quality mirroring the wonderful story and makes it look easy. He has a full arsenal of techniques at his disposal and he is not afraid to use them. Combined with Jasen Smith’s art and Colin Bells letters, it grabs you, shakes you and then wraps its arms around you. You are drawn in and the emotion on the page will hit you straight in the gut.

If you have not been reading this series, I have to ask… why the hell not? There is something for everyone and a good deal more to discover. The little Easter eggs littered throughout (EYE OF THE TIGER!!!) and nods to the funny pages are enough to have you pouring over each issue to catch them all. Remember, this is an adult tale, don’t let the funny page references fool you. It is violent and bloody, and one of the best things I have read this year. Go check it out and let me know in the comments what you think of it. .

SPENCER & LOCKE 2 #4 is a psychological and emotional roller coaster where the restraints feel as if they are broken, SO much to like here, be sure to check out a copy as soon as you can.

83%
83%
A psychological and emotional roller coaster

A rock solid psychological action thriller that will make you look at your childhood in a different light.