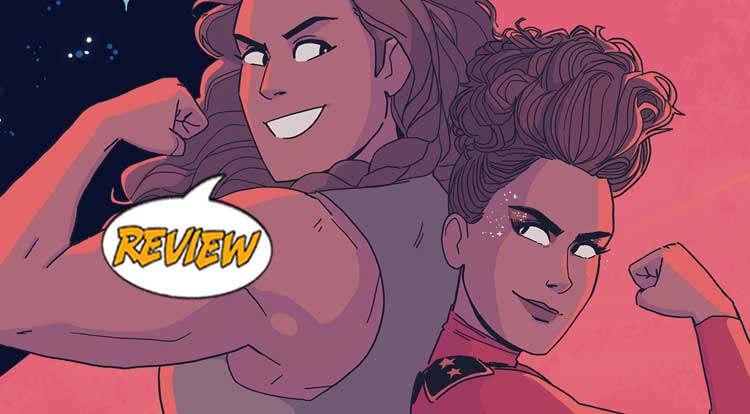 When actors and wrestlers meet, the real magic happens…  Your Major Spoilers review of GLOW #3 awaits! Previously in GLOW:  The Gorgeous Ladies of Wrestling quickly realize that there’s no way they’re going to be able to beat these real, muscle-y professional wrestlers!  With morale low, Ruth has to come up with a new plan, and she’s going to make sure they win – even if they have to lose!

We open in a rather run-down hotel ballroom, as the Gorgeous Ladies of Wrestling (under the unofficial leadership of Ruth “Zoya The Destroya” Wilder are spending a night out before their big match against the Star Primas.  The biggest problem is that Ruth and her troupe focus mostly on storytelling and character-building, while the Primas are serious grapplers, leading to some friction from the get-go.  Fortunately, Ruth impresses Primas leader Anasthesia with her gumption and leadership, and the two of them strike a bargain: Together, they’ll put together a card and a series of matches that accentuate not only the GLOW attitude, but the Primas skill…  if only they can get their crews onboard with the plan.  At the same time, Machu Picchu (known to her friends as Carmen) tries to explain that she just cannot wrestle, only to have luchadora Desdmona offer her a bargain of her own.  If Carmen gives Des one dark match with her best efforts, Des will loan her a mask so that her family won’t discover that it’s her wrestling.

“I THOUGH YOU JUST WORE A HAT AND HAD A DUMB ACCENT?”

As someone who has never seen GLOW, I was very impressed with how quickly and effectively we are introduced to the (remarkably large) cast of characters and how solid their personalities and motivations were.  It didn’t hurt that the book comes with a literal scorecard, but the story effectively let me know who Ruth and Carmen and Ana were through good old-fashioned storytelling.  And it’s a good story, especially as Ruth realizes that her acting training isn’t all that much different than the wrestling she wants to do.  As far as the art, this is a really fun book to look at, with deceptively simple-looking designs conveying tons of detail and emotion.  It even has a manga-style use of cartoon expressions here and there (Ruth’s bulging eyes the first time Anasthesia tags her in the ring is remarkably funny, but even the quietest dramatic moments work, thanks to Templer’s elastic and evocative art.

I have never seen an episode of GLOW and I haven’t yet read the first issues, but you can believe I’m going to remedy that pretty quickly after seeing this issue.  GLOW #3 has the unenviable task of showing us a story from another medium, featuring the tropes of a third, but pulls it off with attention to detail in dialogue, in art and most of all in the reality of these characters, earning a pleasantly surprised 4 out of 5 stars overall.  As a wrestling fan, I”m also impressed by the attention to detail given to making the GLOW experience more accurate than many adaptations of the squared circle, all of which makes for a very entertaining read.

It's a fascinating look into a world that not everyone is familiar with and it works even if you haven't seen the TV series. Nice work!