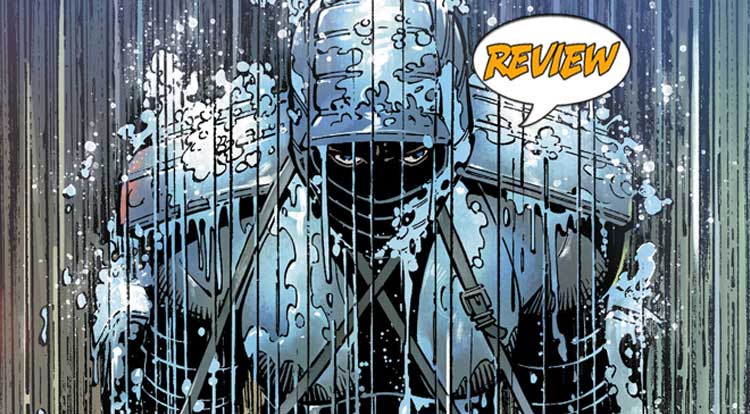 The end is here.  Can even the ultimate assassin survive?  Your Major Spoilers review of Silencer #18 awaits! Previously in Silencer:  Honor Guest was the greatest assassin you’ve never heard of – but now the secret is out.  In the month since Smoke’s devastating attack, the Silencer is on the lam from Leviathan and trying to piece her family life back together, and this is a challenge unlike any Honor has faced before.  Will Honor’s past continue to plague her, or has she at last earned a peaceful respite from her life of murder and mayhem?

Having finally returned home to her family, Honor Guest is determined to give up the life of the Silencer once and for all, save for one little problem: Talia al Ghul and her Leviathan organization.  In the hopes of getting out of their grasp once and for all, she calls in a couple of favors and makes her way to the local Maul Mart, one-stop shopping for the underworld assassins and murderers of the world.  What she finds is her old friend Rita, ready to murder her.  (It’s company policy now, after Honor managed to get a previous location literally nuked off the face of the Earth.)  Instead of information, she gets a confusing mish-mash of rumors and an unceremonious exit, leaving her even more confused.  Back at home, her son Ben is now aware that she is sometimes an armored superhuman with guns and an attitude, but he’s perfectly fine with it, and her husband Blake is coming to terms with the idea that his wife is back from the dead with some wild excuse.  When Deathstroke arrives on their doorstep, it looks like the metaphorical chickens have finally come home to roost…

…but it’s not.  I really appreciate that this issue takes the time to craft an ending for our hero, even to the point where she doesn’t fight Deathstroke as much as have a slightly tense conversation.  It’s even an almost happy ending, thanks to the dismantling of Talia’s organization (as detailed in the Superman books, thanks to a new Leviathan in town) and the Guest family moving far away from anyone that might know them.  On the one hand, it’s a shame to see yet another new character get shuttled off the main stage after failing to find an audience in less than two years, but I like that this doesn’t give us a Bolivian Army ending or the senseless murder of Silencer and her family.  The final page, where she goes to answer the door, hoping it’s the pizza guy but ready if it’s a crazed murderer, is a perfect ending for Honor’s story.  The art isn’t anything spectacular, but Marion manages to deliver a lot of expression and body language, and he’s one of the few to be able to make Silencer’s strange helmet/hat/visor look good.  The brief sequences of Silencer in action are almost sad, a testament to what might have been.

Even though I’m down with the tone and theme of this final issue (and I really like the last page), it does sort of feel like a let-down, and there isn’t a whole lot of incident to be had here.  Silencer #18 brings the last ‘New Age of DC Heroes’ solo book to a fitting, albeit a bit slight, close with better-than-average art and a quiet return to domesticity for our hero, earning 3 out of 5 stars overall.  If you’ve ever wondered by big comic companies keep recasting and reworking their established heroes rather than “just creating new ones”, the demise of this book and the ‘New Age’ line should be an important lesson:  It’s never gonna be that easy, even when you have a unique and interesting character.

A little bit slight, but it's well-drawn and wraps things up nicely for a character who didn't get much of a chance to make an impression.