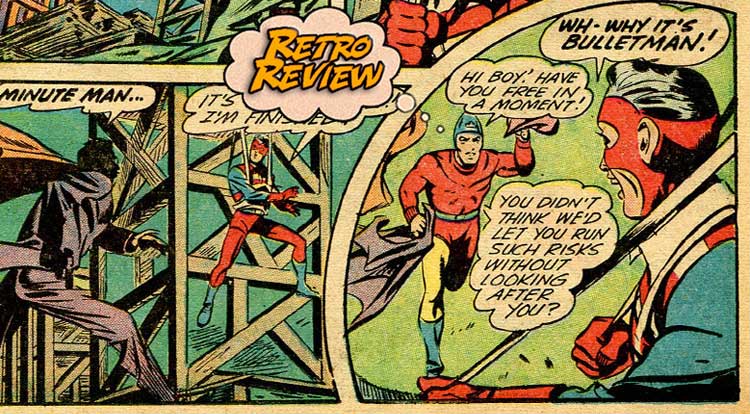 Previously in Master Comics:  After being gravely wounded and orphaned by the terrible Captain Nazi, newsboy Freddy Freeman was saved by Captain Marvel, who shared a bit of his seven quasi-divine elders’ powers with the boy.  Now, by saying the heroe’s name aloud, Freddy becomes Captain Marvel, Jr., protector of the innocent, defender of liberty and headliner of Master Comics!  And, as luck would have it, Cap Junior is also the cornerstone of a unique band of heroes whose exploits are soooo secret that they’ve never been spoken of before or since… …THE CRIME CRUSADERS’ CLUB!  It’s a unique group, with the mystical dynamo that is Captain Marvel, Jr. teaming up with Bulletman and Bulletgirl (whose powers involve near-invulnerability, flight and cool helmets) and the essentially powerless Minute Man, who has a quandary:  How to better sell war bonds to support the soldiers in the field?  He alights upon the brilliant (albeit more than a little crazy) idea to enlist the criminals of the city into his crusade, offering them a chance to kill him in return for a donation to his bond drive.  After an amusing delivery of his message (at the fists of Junior and Bulletman), Minute Man makes his pitch. This story features the art of Phil Bard, who reminds me a bit of a looser Jack Kirby in his pencils, and features Minute Man in a masked costume that lacks the star-spangled sleeves that I love in some of his other appearances.  Then again, it’s 1943, and details like costume colors and design continuity were secondary to getting the books out and to the kids on time.  Moreover, this story’s cute hook makes it a lot of fun to read, as the powerless Jack “Minute Man” Weston immediately finds that criminals aren’t to be trusted, and has to make an immediate break for it! With his powerful partners watching his back to make sure that the criminals adhere to the rules, Minute Man uses his wits and resourcefulness to stay alive, only to once again discover that crooks just don’t play fair. The horrific crash throws Minute Man free, but leaves him unconscious, at the mercy of the various nasties.  Fortunately, these mugs are the type of terrible that doesn’t even have honor among their own superstitious and cowardly number, turning on each other long enough for our hero to awaken and escape certain death.  Making his way to an airfield, our stars-n-stripes hero makes an aerial escape, but gets shot down and parachutes into the wilds of Pennsylvania.  After a near-miss with a tangled parachute, he is once again at the mercy of a large N*zi with a gun… who unmasks as Bulletman!  With the final hour ticking down, the criminals finally encircle our hero, who has promised not to fight until midnight…  Will he survive? He will, thanks to a clever bit of rule-bending.  By fleeing west into the Eastern time zone, he bought himself another hour AND manages to raise a cool hundred grand for the war drive!  It’s a brilliant tactic, honestly, and makes for a cute little story, but the real question for me is: What happened to the CCC?  By the time these characters reappear in the 1970s, they (along with the other Marvels, Ibis, Mister Scarlet and Spy Smasher) have realigned themselves as The Squadron of Justice, with the Crime Crusaders just a lost footnote.  Still, in an issue that features a couple of Cap Junior solo stories, a Hopalong Cassidy tale and something called Hoodoo Hannigan, the CCC is really the main draw, leaving Master Comics #41 with a better-than-average 3.5 out of 5 stars overall.  If somebody at DC wanted to make me happy, they’d do something with these Fawcett properties other than Billy Batson.

Fawcett's lost super-team in their only adventure, with some wild and loose art and a clever story hook, along with whatever Hoodoo Hannigan is, makes for a solid issue full of good readin'.