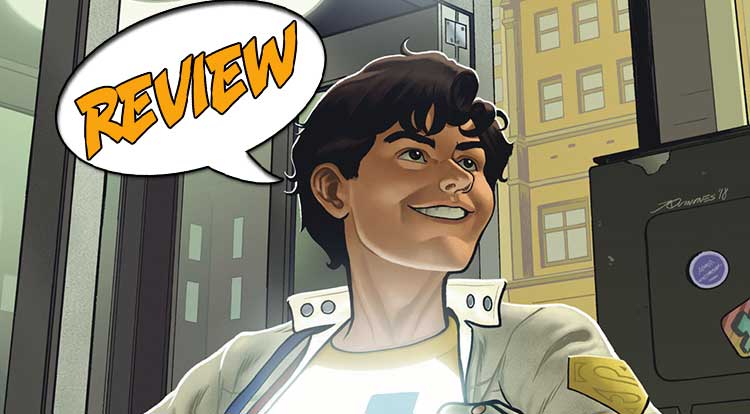 Expect the unexpected when the H-Dial is in play!

Miguel and Summer make it into the Old Justice League Headquarters where the spirit of Mr. Thunderbolt attacks! Find out what happens next when they Dial H for Hero #4! Previously in Dial H for Hero: The H-Dial has been around for some time, affecting the lives of its users. Summer and Miguel, two young people on the run, have found and lost the H-Dial. They go to Central City and try to get the attention of The Flash with no luck. And we learn a bit more about why people are after the H-Dial. The Thunderbolt Club is a group of people who have used it in the past, and that hour as a superhero was so incredible that they can’t help but dwell on it and their desire to experience that rush one more time. One of these people is Corrine, a police officer, and the Operator talks her into dialing. Things get rather trippy, but at the end of a fight, Summer and Miguel recover the H-Dial and head for Detroit.

NEVER A SUPERHERO AROUND WHEN YOU NEED ONE

As Dial H for Hero #4 opens, Summer and Miguel are trying to get into the old Justice League headquarters in Detroit when they are stopped by a terrifying Batman robot that threatens to attack. As soon as they admit that they have the H-Dial with them, the robot disengages and someone invites them in. Miguel starts geeking out at being in such close proximity to real heroes, or at least a place where they hang out. They are met by Snapper Carr who is basically the night manager. He really wants to use that H-Dial.

Meanwhile, back in the Heroverse, Robbie Reed (The Operator) talks to himself, thus filling us in a little. He’s in the Heroverse, surrounded by the potentials for millions of heroes, but he cannot interact with them. The main point of this is to show us that, while he’s trapped the body of Mr. Thunderbolt there, his spirit still roams the Earth.

And roam it does, right into the old Justice League headquarters. He needs the H-Dial to recover his body. But in the meantime, he can take over this handy Superman robot… As that happens, Snapper is trying to get to use the H-Dial while Summer is trying to get him to call Superman. Or pretty much anybody at this point. Then the superhero robots step in, and Snapper can no longer control them. It’s a free-for-all dive for the H-Dial!

By now we know the routine – they dial and become three brand-new superheroes. This is such a great gimmick, and the heroes are so out there that it is fun to see how the plot bends around them. This time, Summer changes into Chimp Change, a noir were-gorilla gumshoe from Gorilla City, while Snapper becomes Alien Ice Cream Man, who has become one with soft serve. It’s so crazy. Miguel becomes Lil’ Miguelito – a single panel little kid comic (think Dennis the Menace) that you might see in the paper.

There is some fighting, but Miguel advances the plot by dialing again and again, trying to become what he thinks is a real hero, or at least one who isn’t running around in underpants. Instead, he goes through a number of parodies of the Sunday funnies. Until he hears a voice, which he assumes is the Operator. It isn’t. Mr. Thunderbolt talks to him and points out how Snapper Carr doesn’t deserve to be a hero. All Miguel needs to do is Dial…S. For Sockamagee. This is what Mr. Thunderbolt needs to materialize as himself, which he does, grabs the H-Dial, and vanishes. The portal stays open for a second and Miguel, realizing that he’s done something wrong, jumps in after him.

There are so many potential things to talk about with Dial H for Hero #4. The characters in their normal mode are good. They’re expressive and they look like young people. You can see now Snapper is trying to impress them, and they’re not falling for it. The Justice League robots are plainly robots, with simple linework that shows us the essentials. I also love the few more scenes we get of the Heroverse. Besides an overall glowing lightning effect, there is a distinct telephone theme, and Robbie Reed’s tower resembles and old-fashioned candlestick phone.

But once more I really love the total change in style when we get to the Dial-H heroes. Chimp Change, as is befitting a noir heroine, is drawn in black and white, except for a few scarlet accents. As a half human, half gorilla type character, she does look a bit odd at times, but the overall linework is striking. Alien Ice Cream Man looks as though he came from the pages of a trippy sci-fi book. Capping it off is Lil’ Miguelito who, in his repeated dialing, ends up paying homage to many of the Sunday funnies – Hagar the Horrible, Peanuts, Nancy, Cathy, Dilbert and probably more.

BOTTOM LINE: NOT A LOT OF SPACE TO ADVANCE THE PLOT

Dial H for Hero #4 moves along quickly, with a good chunk of the book taken up by the H-Dial heroes and their fight. It’s a lot of fun, but the plot doesn’t seem to have a lot of time to develop. There are some amusing character moments, and things are starting to make some sense. It’s delightful, but not terribly profound.