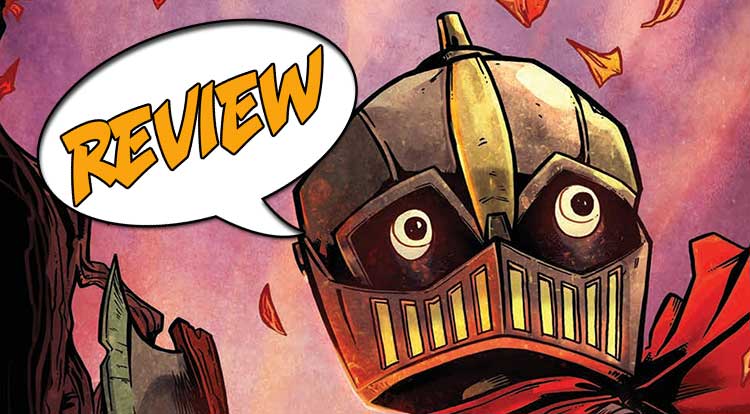 On the world of Arcana, a race of mechanical people have been enslaved and depersonalized. When one dares to be an individual, what new perils await him? Find out in Canto #1! Set on the world of Arcana, we follow the adventures of Canto, whose people have been enslaved for generations. Forbidden to show affection, forbidden to love, forbidden to even have names, these small tin men still have stories and dreams. Canto has been given a name, and dares to feel affection, and armed with love and courage, he may be able to brave the outside world and bring back the heart of the girl he loves.

A NOD TO OZ

I was not entirely sure what to expect when I opened Canto #1, but there’s an opening quote from the Wonderful Wizard of Oz about the Tin Woodman and his reason for wanting a heart, and that sets the stage for this story. As it opens, with long shots of a barren looking world, the narrator tells a story about a boy and a princess. It sounds like a variant on a fairy tale, but what is incredibly sad is that this is the only story these people have left to them. Think of how integral stories are to our lives and imagine the bleakness of a life without them. That’s a theme that runs through this issue.

Canto’s people are small and are at least in part mechanical. We learn early on that they are slaves, and the ruling race have removed their hearts and replaced them with clocks. They are doomed to work until their clock runs out, and work they do, chopping down dead trees to fuel the fires of Arcana. It’s drudgery, but every now and then they find some small, sparkling stones. Canto gives one of this to a girl he likes, the girl who gave him his name.

As the story progresses, we learn a little more about these people. One of them dies, and their elder tries to save him, to no avail. And it is of great importance to them to bury him in the woods so the slavers don’t throw him into the furnaces. Slavery and oppression, along with the accompanying depersonalization, are painfully front and center. These people are small and vulnerable, yet they’re trying to hold onto their humanity in whatever small ways they can. In the woods, the girl comes to talk to Canto, and they encounter one of the dangerous creatures. Now this is also interesting. For all we know, these creatures are terrifying and will eat people. But Canto remembers the Elder talking about a particular one of the older creatures, who has decided that their people are not food. This gives me a hopeful feeling – I like when a book finds a way to show us that not everyone is a stereotype. Or that it’s important to look beyond the stereotypes – it’s the only hope we have of getting along.

One thing leads to another, and the slavers find them and strike down the girl. The elder does his best to repair her, but her clock is running out. Canto offers his own heart for hers, but the slavers have thought of that, and it won’t work. The elder recognizes that Canto is special – he has a name, he loves, he would give his time for another. And he tells him of a hermit who knows how this all came to be, and where the slavers keep their people’s hearts. If Canto can find the girl’s heart, maybe she could be saved.

A BLEAK WORLD WITH LITTLE SPARKS OF HOPE

The art of Canto #1 is striking. There’s a tight focus on the people who are slaves. They toil at chopping down trees that look like they’re dead already, all for fueling furnaces that we don’t see. We don’t know what these slavers are doing, but I get a strong sense of a world that’s being stripped bare.

From the start, all the clockwork people look very much the same. Their bodies look like armor; their limbs are skinny, their eyes huge. But as we see them more, we start to see the differences between them. The elder is distinct – he has a gray moustache and an eye patch, and he wears a sort of green cape. It takes longer to spot the other differences. Canto wears a little strip of red fabric on one arm. The girl has a blue scrap across her body. Even in the direst of circumstances, people desire to be individuals.

BOTTOM LINE: A CLASSIC HERO’S JOURNEY WITH SOME DEPTH

It takes a little time to get caught up in Canto #1 and get familiar with the world, but once you do, this is a captivating world. It’s magical and rather dark, but there is a sense of hope. There’s a hidden story here that Canto seems likely to uncover, and I can’t wait to see it unfold. All in all, this is off to a solid start.