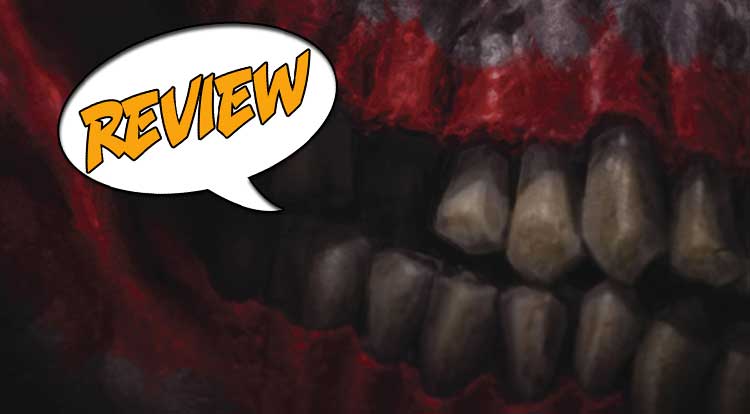 An impressive effort that falters at key moments, Batman: Damned #3 will provoke endless debate because of the deliberate narrative choice that ambiguity rules.

After receiving assistance from the Swamp Thing to escape his ghastly entombment, the Batman encounters John Constantine, who takes him on a bizarre odyssey via a number of magical players in Gotham.  Will the Batman uncover exactly what is going on, and is the Joker really, truly dead? Find out in our stunning Major Spoilers review! Previously in Batman:  Damned – after the events in Joker, where the clown prince of crime seemingly fell from a bridge to his death, the Batman has been stricken by the guilt that he may have killed the Joker.  He has bounced from pillar to post, until an encounter with Harley Quinn leaves him paralyzed and possibly violated.  Awakening in a coffin, Swamp Thing swiftly rescues him – but the questions remain – Is the Joker dead?  Who is the cause of the visions that have been haunting the Batman?  And is reality just a pinprick away from bursting?

Batman: Damned #3 is a good title marked by obscure writing that may or may not be the result of the storytelling of Brian Azzarello.  There’s a dreamlike quality to the writing that makes the audience, let alone Batman, question what is real and what is illusion.  Indeed, the issue is more or less a discussion around those two concepts.  The use of magical characters throughout the series, and particularly here, adds another level of ambiguity to the story that will frustrate and inspire in equal measure.

Indeed, Batman: Damned #3 takes some of it inspiration from an earlier title, The Killing Joke.  Problematic for some today, The Killing Joke was also marked by similarly grand concepts, with the relationship between Batman and the Joker the central element, as it is here.  Its influence is all over this issue, especially the last few panels that are directly inspired by the famous joke scene at the end of The Killing Joke.  Personally, I still enjoy The Killing Joke (though enjoy is probably not the right word).  Its moodiness is doubled down in this issue, and it’s clear the end scenes of that book is replicated in a warped manner in Batman: Damned #3.

Aside from the writing, Lee Bermejo’s art is magnificent.  Epic in scope, it sprawls across the page, an organic whole that combines the gritty realism of Gotham with the dirt and grunge of the cemetery Batman wakes up in (well, under).  Shadows fall in layers, crawling across the landscape.  Chiaroscuro light hides more than it illuminates, particularly in the bar where Zatanna makes her appearance.  There is solidity to Bermejo’s characters, particularly Swamp Thing, which gives them a density and connectedness to their surroundings.  Swamp Thing is a massive being, embedded directly into the landscape, a being that has no real beginning or an end.  Bermejo’s art makes Swamp Thing more an elemental than a physical being.  Those pages at the start of Batman: Damned #3 are some of the most impressive you will see this year.

I wanted to like Batman: Damned #3 more than I eventually did.  I certainly appreciate the dream like quality present for much of the issue – it is a tried and tested method of storytelling that has served the genre well for many years.  I’m just not sure that in a title featuring Batman, trading the gritty for dreams and the dream-like is a formula for success.  I’m not saying it can’t be done, I’m just not sure it works in this issue.

What that storytelling style does lead to is a sense that Batman is never really in control.  For such a grounded (for a vigilante with a bat-fetish) character, the introduction of magicians, wraiths and what may or may not be time travel is possibly a step too far.  Batman: Damned #3 is certainly beautiful to look at, the pages swarming with striking images that will haunt the reader long after they set the issue aside.  But with Batman primarily a victim, and reality less fixed than one might expect, it all feels more like an experiment in storytelling, than a proper story.

Impressive visually, narratively incoherent, Batman: Damned #3 relies more on its imagery than any cohesive storytelling to carry the heavy lifting.  It’s replete with characters one doesn’t usually see in a Batman title, and for that it’s worth a look.  All caveats aside – it is well worth the price of admission, and if at some stages it falters, there’s enough else going on in the issue to keep the reader engaged.