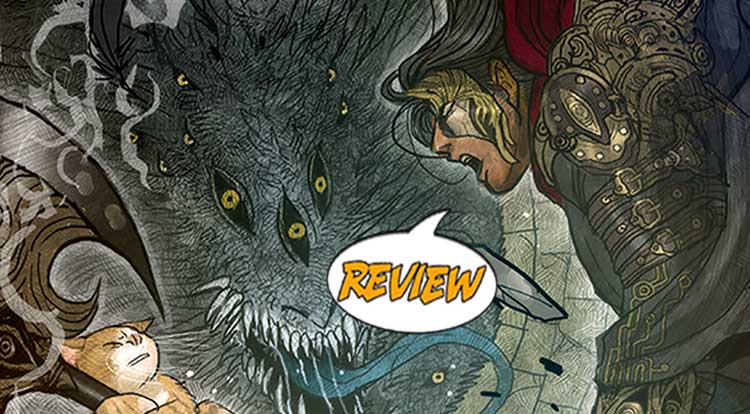 Maika is finally close to getting all the answers she ever wanted – but at what price? Your Major Spoilers review of Monstress #23 awaits! Previously in Monstress: During her search for her kidnapped companion, Kipa, Maika Halfwolf was abducted by members of the Blood Court, a secretive organization that worships the Shaman-Empress’s bloodline. They are led by the Lord Doctor, last eye-marked descendant of the Shaman-Empress… and Maika’s biological father! He tried to convince her to join his cause, but she held her ground and resisted until she realized that he has taken possession of the Inquisitrix Gull and is using her Monstrum-controlled body to perform gruesome experiments.

DISCUSSING ETHICS ON THE BRINK OF WAR

As the issue opens, Kippa the fox girl and Ren the sorcerer cat making a break for it, only to stop cold when their killing instincts get the best of them. Elsewhere, Maika finally gets to sit down with the father she never knew and discuss what he’s been up to. Most of it seems to be accumulation of power and status, all the better to capture ancient creatures and experiment on them, and he reminds her that he was once the host of Zinn, the Monstrum that possesses her. She’s understandably angry that he grafted an artificial limb to her body without consent, but her anger turns to shock when she realizes exactly what it is he is feeding her. (It’s like Soylent Green, only much more graphically presented.) Their discussion turns to her need for blood and he warns her not to starve her strange monstrous nature, explaining that he regrets having eaten some of his closest companions over the years. Finally, Maika can take no more and breaks Inquisitrix Gull free, intending to leave with her, only to find that her wily father is more than a match for her… OR for her Monstrum!

This book took my breath away from the first pages, especially how well it melds a cute anime fox-girl and the desperate circumstance of her escape, with every panel featuring detail and sometimes disturbing realism. Every panel of the Lord Doctor (who reveals that he’s also been known as The Ghoul Killer and The Cannibal Murderer in a chilling sequence) is perfect, carrying his immense confidence that nothing can harm him, a self-assuredness that proves to be true, at least for the things in this issue. Maika’s search for answers has been a driving force of this book, but the credit of Liu’s script is that getting the information she wants actually doesn’t help her to answer any of the questions she really wants answered, with her father maddeningly refusing to accept her protestations. The ease with which he overcomes Zinn and her plans to get her friends and leaves is truly chilling, and the final panel convey’s Maika’s despair and disbelief perfectly. It’s a real gut-punch.

In short, this issue is really impressive, with beautiful art on every page and a story that seems like a quiet conversation suddenly turning into the realization that our main character is completely powerless in the clutches of monster greater than any we’ve seen to date. Monstress #23 is the best comic I’ve read in a long while, with a gripping story that builds to a terrifying climax, all presented with nigh-perfect art that enhances every story beat and emtion, earning 4.5 out of 5 stars overall. I’d missed a couple of issues of Monstress and now I realize what a HUGE mistake that was.

This is a comic that excels in both story and art, working together to make for a riveting read and a truly shocking cliffhanger.