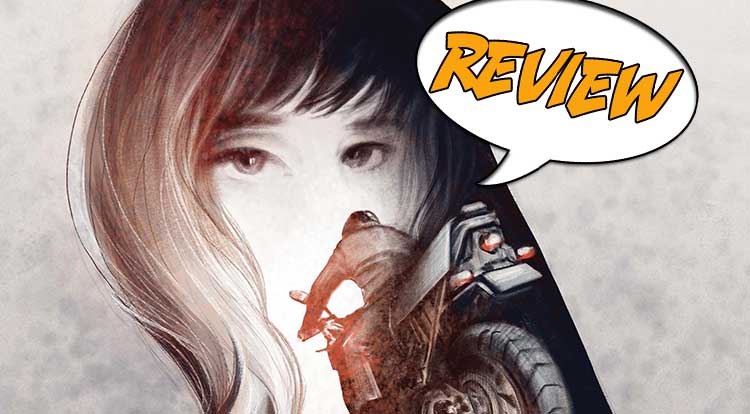 At The End Of Your Tether #1 Review

At the End of Your Tether #1

A great beginning to a mysterious coming of age story. Make sure you check it out.

Ludo is young. Worse, Ludo is young and thinks the world is against him. This normally may not be a problem, but a military family must always be ready to move. One move means leaving his friend Arlo behind. Several years later fate brings them back together, only for Ludo to find Arlo has gone missing several days before he last spoke with her. Young love, rebellion, and hard lessons await in the first issue of AT THE END OF YOUR TETHER from the Lion Forge imprint Roar. It hits store shelves on June 26th. AT THE END OF YOUR TETHER #1

Previously in A THE END OF YOUR TETHER: Announced at Emerald City Comic Con 2019, At The End Of Your Tether is one part coming of age story, one part mystery, one part drama, and all parts entertaining. It is the latest series from Lion Forge and their Roar imprint, running three issues. This first issue is out this week.

A ROLLING STONE GATHERS NO MOSS…

In another place, possibly another time, three people gather for around a small fire for what seems to be a ritual of remembrance, or of consolation. A letter is thrown into the fire, directed to those they can only see out of the corners of their eyes, and the flames engulf it as the words to another world are consumed.

Rio Azul, United States Air Force base, in the past. In the cookie cutter world of military housing, a young boy is going through a ritual he has experienced many times before. He is new to this place, as is his family, but the whole of everything seems familiar. This is a gathering, maybe of friends, maybe of potential friends, but Ludo is only mildly aware of it. Ludo is a military brat, traveling from base to base, school-to-school, temporary friendship to temporary friendship at the whim of some ethereal and unknowable plan perceived by ones who decide such things. He learned not to really get comfortable, until he met Arlo. Arlo was his age, young and female, and they formed an instant friendship over vegetarian food and video games. She was his best friend and his first love. But the wheels of progress move on, and the plans of those who decide such things are not for the young to question. Eventually Ludo and his family moved on, but he always remembered.

Years later, Ludo has grown considerably. His father’s motorcycle shop is closing and the strain on the family is building. Ludo is having trouble handling it and begins acting out at school. When his father is forced to sell a motorcycle he had promised his son, Ludo needs to be alone. Whether the man who stumbles on him bleeding is part of the plan or not, Ludo doesn’t know. He can only hold the man and hope he is putting enough pressure on the wound. The next day the man is recovering, but another fight occurs at the school. His mother and father hope the trip to Rio Azul for his mother’s charity boxing match will give the boy some time to think. Rio Azul is where Arlo lives and Ludo is still trying to figure out his feelings. Unbeknownst to him, things in Rio Azul are not as they should be. Events there will plunge Ludo’s world into chaos as he tries to solve a mystery he never expected revolving around a girl he can never forget.

FIRST LOVE IS THE HARDEST LOVE

At The End Of Your Tether #1 is published by Lion Forge on the Roar imprint, which is for teens ages 13 to 17. Under the direction of editor Jasmin Amiri (The Woods, Giant Days) writer Adam Smith (Jim Henson’s Beneath The Dark Crystal, Long Walk to Valhalla) delivers an emotion pack script illustrated by V.V. Glass (In The Cold Dark, Assassin’s Creed) with colors by Hilary Jenkins (Black Badge, Grass Kings).

Adam Smith presents Ludo’s tale in a way that slowly draws you in. Ludo could be any young teen with feelings of oddness, loneliness and just not fitting in. He captures the qualities many of us painfully remember so simply you realize you are identifying with Ludo very easily. You sympathize with him, and you quickly care about what happens to him. This is not a cookie cutter, teen- angst with a dash of rebellion thrown in. Ludo has the feel of realistic and true emotion, emotion many of us dealt with at some point. He wants someone he can be himself with and open himself up to without judgement. He finds it in Arlo. Even when she is not on page you feel the presence of Arlo. She is the longing Ludo has, as if she were part of his emotional jigsaw puzzle that fell under the table. Most of us remember that first love and some are lucky enough to remember falling in love with your best friend. This is the feeling that Smith conveys to the reader. It makes it even more impactful when he pulls the emotional rug out from under you at the end of the issue.

V.V Glass has a very simple, relaxed style for this story and it is different from much of their other work I have seen. They bring emotion to the panels in a way that a flashy, over the top line could never achieve. You see the heartbreak when Ludo’s parents are struggling figure out how to help him, the joy when he realizes he may be reunited with his best friend and the pain of what he discovers. Glass’s art, combined with the liquid style of color that Hilary Jenkins brings to the project, all melds together for an impactful experience.

At The End Of Your Tether #1 is only the opening issue of a three issue series, but you get more of an emotional impact in this one issue than whole runs of some other stories. There is a mystery here, something beyond the norm that is hinted at in the very beginning sequence. At this point it takes a back seat to Ludo’s journey, which works in its favor. If too many hints had been dropped or too much time spent on the underlying plot, I think it would have diminished the whole issue. As it is, you are given time to dive into Ludo’s story and empathize with him. That makes all the difference, and it makes this issue one to pick up.

At The End Of Your Tether #1 will hurt your heart in a way only memories of childhood can, but you still can’t put it down.