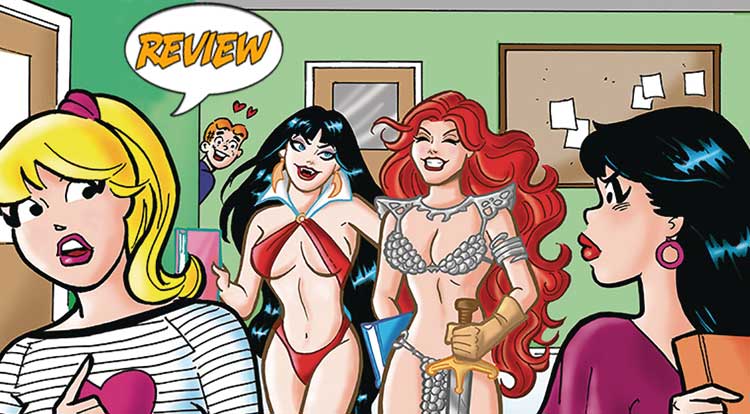 There’s been a murder in Riverdale, which has brought Vampirella and Red Sonja to town…  somehow?   Your Major Spoilers review of Red Sonja and Vampirella Meet Betty and Veronica #2 awaits! Previously in Red Sonja and Vampirella Meet Betty and Veronica:  The body count increases, and the mystery deepens as Vampirella and Red Sonja investigate the deaths plaguing Riverdale High.  Turns out American high school life is as mysterious and perplexing as the murders themselves!  Meanwhile, Betty and Veronica have troubles of their own when they butt heads with the editor of the school newspaper over their investigative news coverage.  Is there a cover-up afoot?

SOME SORT OF VAMPIRE CULT?

After the mysterious murders last issue, Sonja and Vampirella have gone undercover in the Riverdale student body, posing as exchange students from Europe.  Sadly, they’re not getting anywhere with the police, who dismiss Vampirella’s reports of a vampire cult coming to Riverdale, but they’ve at least got the best reporters on the Riverdale High staff to back them up.  With Sonja now the star of the football team, they’ve even got an in with the football players, who they hope can give them some leads into the murder of the coach last time around.  Sadly, that leads to one of the players, a boy named Jorge, becoming the next victim, with Betty’s editor refusing to run their investigative piece on the potential serial killer, leading her into the archives of the newspaper for more information.  That’s when she finds the picture of herself, Veronica, Vampirella and Sonja…

I have not idea how this crossover works, if there’s time travel involved, if something else is going on, but the best part is, it doesn’t even matter.  The fun here is in seeing these characters interacting, with Sonja’s beligerence and Vampirella’s cool playing against the Riverdale duo while pretending to be high school students.  There’s even what I think is a cameo appearance of Dejah Thoris during a flashback to our barbarian/vampire team’s history, making me think that all the various crossovers of Dynamite all take place in the same reality.  As for the art, it’s just plain gorgeous, with all four characters having distinct features and body types, and impressive facial expressions all around.  I especially like how our main characters aren’t hyper-sexualized, but are still beautiful, with Betty and Veronica clearly being younger than their newfound friends.  The story itself is kind of a boilerplate murder mystery, but it serves as a strong framework for Amy Chu to provide a lot of character work and interesting dialogue.

BOTTOM LINE: I LIKE THIS, EVEN IF IT’S WEIRD

All in all, Red Sonja and Vampirella Meet Betty and Veronica #2 is the kind of comic book that by all accounts shouldn’t work, but actually succeeds on the strength of charismatic art and well-handled dialogue, sweeping us by all the moments where it might have caught itself up and tripped, earning 4 out of 5 stars overall.  I truly enjoy this creative team’s ability to put these characters together and make it work and I’m ready to follow this series to the end based on this issue.

I can't explain why the synthesis of these characters works, but it does, and I really want to know how this all shakes down.