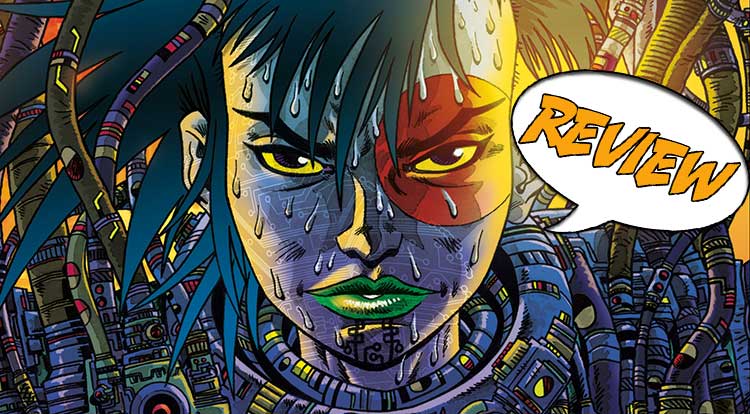 Meet Libra Kelly, or is it Lulu Fun? Maybe Sybil Mann? Mary Hair? In a world where the corporations monitor your every move and people can slip into a new identity as easily as pulling on a new pair of socks, a master identity thief can have a hard time remembering her own. The situation grows worse as she discovers she is trapped in her latest identity with her time, and life, running out! Rebellion releases the collected edition of COUNTERFEIT GIRL, on store shelves June 26th! Previously in COUNTERFEIT GIRL: Originally published in as a serialized story in 2000 AD issues (or Progs) 2000 through 2008 and 2010, Counterfeit Girl comes from writer Peter Milligan and artist Rufus Dayglo. Now it has been collected in one amazing volume, ready for the world to assimilate once again.

ALL YOUR IDENTITIES ARE BELONG TO US…

In the far-flung future, the corporations rule the world. There are the haves and the have nots, the visible and the invisible. Step out of line and you can be sure the line will respond. To combat this totalitarian, capitalist nightmare, people sometimes must change their identities. Not just their looks and locations, but their very memories. Simmers, experts in this high-tech version of the ultimate identity theft, shadow targets for weeks, discovering their habits and motives, even breaking into their homes to gather those last few ingredients that will form a new persona for someone in need to hide within. Maybe there is a messy divorce you are trying to escape, maybe you are a thief on the run; it doesn’t matter. If you can find them, and if you have the money, they will provide you with a new identity allowing you to hide from your enemies, for a time.

When the client is a political agitator of the corporations, Libra Kelly will help you free of charge. Libra, or Lulu Fun as she is currently known, has a special grudge against the corporations. Albion Corporation in particular. You see, before she began her life as a simmer, Libra Kelly was someone. The Albion Corporation took that all from her, and now she survives on the outskirts of society, taking new identities when old ones become too hot to handle or their credit rating fall below the point of usability. While she will help the enemies of the corporate giants, all others must pay, and pay well.

Soon the past catches up with Libra when one of her prior clients is tortured and force to reveal her latest base of operations. What follows is a mad run for her life as Libra tries to find the means to slip into a new identity and continue her life. She doesn’t know that a trap has been laid, a trap which will mean she either breaks free of her latest identity or die. What follows is action, adventure, a romance, and even sentient illnesses. Will Libra escape the grasp of her corporate enemy, or will she finally be overwritten by the Man?

YOU KNOW WHO YOU ARE, DON’T YOU?

Coming out of the legendary British magazine 2000 AD, Counterfeit Girl was a serial story told over ten (10) issues in 2016. The team of Peter Milligan (Hellblazer, X-Static) and Rufus Dayglo (Metal Gear Solid, Tank Girl) brought the story to the page, and a mind-bending story it is.

Peter Milligan has been a long time contributor to the British comic book seen as well America titles. He has an imaginative and irreverent style of writing which holds no one’s conceptions as sacred. Everything is open for his own interpretation as he weaves plots that seem straightforward until you sink into them. Then, and only then, are you confronted by the swerve and have to look at the whole piece of work as a different animal than you originally thought it was. The swerves are plenty in Counterfeit Girl. Just as you think you are getting comfortable with the setting and the coming story, Milligan expertly slams on the breaks and shifts gears. It makes you feel similar to how you would if you were playing checkers only to discover your host had been playing chess.

His cohort on this story is Rufus Dayglo. Dayglo is one of those artists who can take a simple street scene and pack it with so much detail and information that you spend an hour dissecting it only to find you keep uncovering more detail you did not realize was there. His panel layout is dynamic, his camera shots work with the story to heighten the world it occupies, and there is so much originality there you start to wonder if he doesn’t have a window to another world. Adding to that effect is the vibrant, sometimes psychedelic, color work of colorist Dom Regan (Savage Dragon, 2000 AD), and you have a mind trip that goes beyond the story itself. Vivid is an understatement.

This story has a little something for everyone, action, romance, betrayal, the cutting down of unpopular political figures, science fiction, etc. It would be hard to place it squarely in one genre, but dystopian cyberpunk comes to mind, but that really just barley covers it. There are some rather disturbing images, visual and described, but it all fits the tale and adds to that level of enjoyment. There are some slightly clumsy transitions between chapters, but taking into account the serialized nature of the original publication it is obvious why they are needed. It takes nothing away, and tends to bring the plot back to the fore every few pages.

COUNTERFEIT GIRL is a great, self-contained story from that oldest and most venerable of British comic magazines. The British take on the format of comics and their method of sharing a story is different from the American standard. In my humble opinion, it is one that needs to be explored more on this side of the pond.