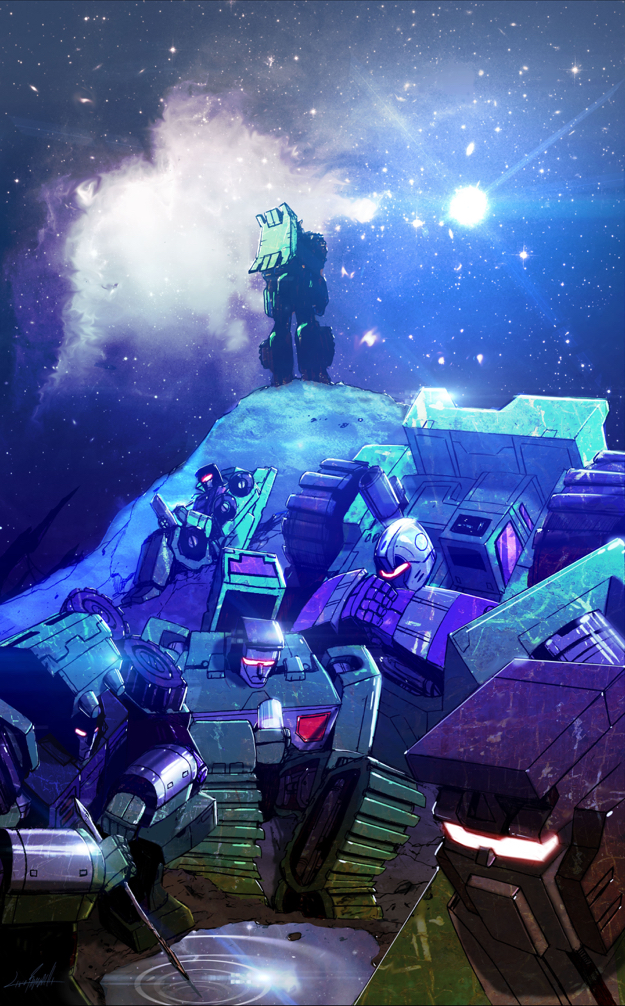 Beginning in September, IDW Publishing proudly builds upon the success of 2019’s bold new era of Transformers comic books with its first spin-off series: Transformers: Galaxies! Featuring story arcs that delve deeper into the origins, motivations, and world-shattering machinations of the extended Transformers cast, Galaxies launches with a story arc dedicated to the fan-favorite crew, the Constructicons! Written by Vox Media co-founder and lifelong Transformers devotee Tyler Bleszinski, with luscious artwork by longtime Transformers artist, Livio Ramondelli, Transformers: Galaxies #1 uncovers the hidden secrets of Cybertron’s vast beauty and extraordinary cityscapes. Long ago, after the War Against the Threefold Spark ended, the Constructicons emerged to help rebuild the decimated planet in grand fashion. But what happened to them in the years since? Why had they been erased from Cybertron’s history… and what have they been planning for their devastating return?

“I’ve dreamed of the day that I could somehow be involved in the Transformers universe,” says Bleszinski. “Humanizing the Constructicons in a refreshed origin story with Livio Ramondelli – one of the most talented Transformers artists ever – will be one of the highlights of my life and will give me the opportunity to share my passion for these incredible creations with my kids’ generation. This is truly a dream come true.”

“Transformers: Galaxies delves into what’s happening away from Cybertron,” says editor David Mariotte. “Tyler and Livio are working on a story about broken promises and lost futures — about those who fall by the wayside to maintain a utopia.” To commemorate the debut of Transformers: Galaxies, IDW will offer multiple variant covers, including Cover A by Livio Ramondelli, Cover B by Nick Roche, and two Retailer Incentive covers by George Caltsoudas and Casey W. Coller, respectively.

For information on how to secure copies of Transformers: Galaxies, as well as the parent series Transformers (now shipping monthly), please contact your local comic shop or visit www.comicshoplocator.com to find a store near you.

TRANSFORMERS and all related characters are trademarks of Hasbro and are used with permission. © 2019 Hasbro. All Rights Reserved. Licensed by Hasbro.

About Hasbro
Hasbro (NASDAQ: HAS) is a global play and entertainment company committed to Creating the World’s Best Play Experiences. From toys and games to television, movies, digital gaming and consumer products, Hasbro offers a variety of ways for audiences to experience its iconic brands, including NERF, MY LITTLE PONY, TRANSFORMERS, PLAY-DOH, MONOPOLY, BABY ALIVE and MAGIC: THE GATHERING, as well as premier partner brands. Through its entertainment labels, Allspark Pictures and Allspark Animation, the Company is building its brands globally through great storytelling and content on all screens. Hasbro is committed to making the world a better place for children and their families through corporate social responsibility and philanthropy. Hasbro ranked No. 13 on the 2019 100 Best Corporate Citizens list by CR Magazine, and has been named one of the World’s Most Ethical Companies® by Ethisphere Institute for the past eight years. Learn more at www.hasbro.com, and follow us on Twitter (@Hasbro) and Instagram (@Hasbro).