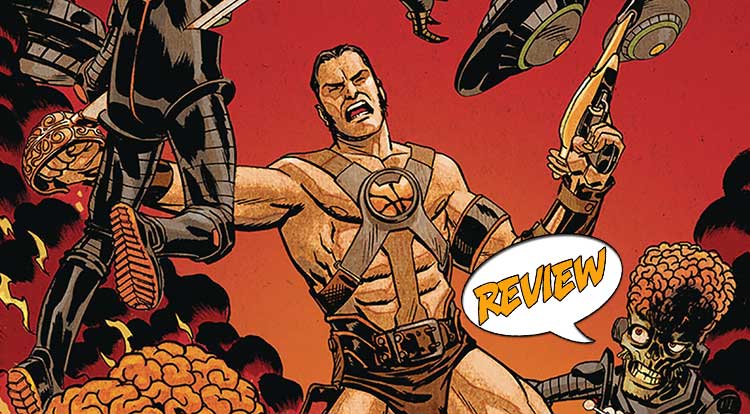 The lost Earthman meets the mad Martians, and it could not have been more entertaining.

John Carter, the Earthman known as the Warlord of Mars, finds himself facing a threat greater than any he has faced before! The Martians are attacking… Mars? How did this happen? Where did they come from? Why haven’t Carter and his allies faced them before? Those questions are answered and more are posed in WARLORD OF MARS ATTACKS #1 from Dynamite Entertainment. Previously in WARLORD OF MARS ATTACKS: Captain John Carter is a native of Earth, but he found his life truly began once he found himself transported to the red sands of Barsoom, the world we know as Mars. There he became a warrior and fell in love. He has friends, a wife and a son. Although he occasionally goes back to Earth, his heart and soul are of Mars.

The Martians of Mars Attack have been a green menace unlike any other the universe has known. Their technology, combined with their single-minded purpose of destruction and conquest have made them feared wherever they appear. They are of Mars, but their origins are shrouded in mystery.

LAST STAND ON A RED PLANET

The green horde, which the natives of Barsoom have dubbed The Moonhead, have been engaged in a violent attack on the red planet. The forces of Barsoom have not been able to quell the tide of violence. In an attempt to find out the origins of the attackers, John Carter has travelled to the hatchery of the Moonheads and destroyed it. In doing so, he found the creatures’ origins point back to one of their worst enemies, Pew Mogul. Realizing the danger they are all in, he rushes back to his Princess and son to assist them in defending the Atmosphere Factory and Helium. He arrives at the palace with a full blown attack in progress. Carter has already garnered a reputation among the Moonheads, and he quickly does his best to fulfill their expectations. With sword and laser he dives into the battle and quickly procures a Moonhead flying device. As he approaches the palace, the Princess makes mental contact, strengthening his resolve to reach her. Landing on the battlefield, Carter finds his friend, the Thark known as Tars Tarkas and the two fight side by side, cutting an ichor filled swath across the battlefield. Tars Tarkas delivers the dire news, the attackers have destroyed the Atmosphere Factory. A plan has been set into motion which may take out the attackers, but it will also cost the defenders their lives. Dejah Thoris final wish is that her love be able to find his way to his home on Earth.

At Jet Propulsion Laboratory in California, a celebration is commencing. They have successfully landed on barren Mars and the camera from the lander is beginning to transmit. Dr. Edgar Norman and his team watch with hope as they begin to view the incoming transmissions. They are horrified to see aliens on the screen, and they are clearly not friendly.

The attack on Earth has begun, but what of Barsoom’s defender? What was the fate of Deja Thoris and her allies? What knowledge does Dr. Norman hold that may be key to Earth’s survival?

WHEN MARS ATTACKS, THE EARTH SCREAMS!

The Mars Attacks property has had multiple crossovers during their publishing history and now they continue that tradition at Dynamite. Hot on the heels of the Mars Attacks series, writer Jeff Parker (Batman ’66, Thunderbolts) has taken on the herculean task of adding Mars Attacks to the Warlord of Mars universe.  So how does he do? Well, pretty good so far. He has taken history from the original books, most notably the eleventh and last book: John Carter of Mars, and used it to connect those titles to the creatures of Mars Attacks. His prose when writing the John Carter sequences comes surprisingly close to the formal, flowery dialogue of the books and it is a great touch. He seems to have a knowledge of the characters he is adapting, and is using that knowledge to weave a new tale of the star flung Civil War captain. I’m looking forward to seeing how his integration and plot moves forward.

Dean Kotz (The Red Panda, Charmed) supplies the art for this issue, along with colorist Omi Remalante (The Greatest Adventure, Solar: Man of the Atom) and their two techniques mesh very well. Kotz has a style which is very reminiscent of some of my favorite classic 90’s art, with sharp edges and dynamic compositions.  . His Carter is athletic and dexterous while his Tars Tarkas has a feeling of enormity and strength. Smart panel layouts let your eye flow and the whole book moves at a very good clip. Remalante has some good work as well, using subtle color shadings and intelligent color choices. The use of color gives a feel of three-dimensionality and a good sense of light source. Altogether their combination makes the whole book very eye catching.

As a fan of the works of Burroughs, and a childhood as a Monster Kid, this title hits all my triggers. You have the majesty of John Carter, Warlord of Mars, combined with the overwhelming terror of a full on Mars Attacks. There is no attempt to add humor to the chartreus wave, nor to add a sort of mocking self-knowledge to Carter. The subject, and their clash, is presented seriously as well as entertainingly. It looks to be the start of a great story; I just hope the future issues share the seemingly well-informed understanding of both licenses.

WARLORD OF MARS ATTACKS #1 is an action packed thrill and a worthy melding of two great worlds.