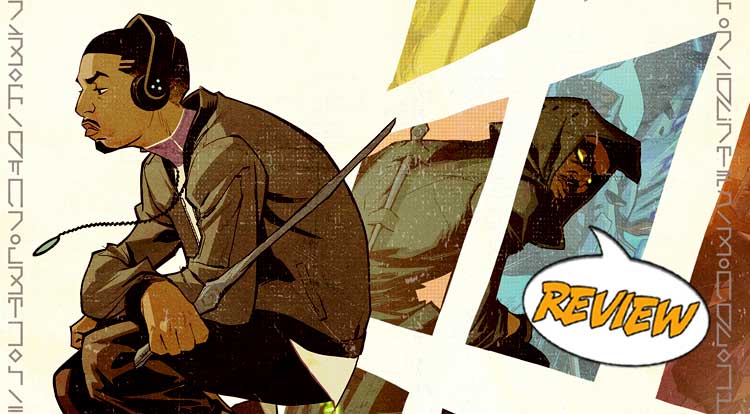 Excellence is real… and so is magic!  Your Major Spoilers review of Excellence #1 awaits! Previously in Excellence: Spencer Dales was born into a world of magic.  His father belongs to the Aegis, a secret society of black magicians ordered by their unseen masters to better the lives of others, those with greater potential, but never themselves.  Now it’s time for Spencer to follow in his father’s footsteps, but all he sees is a broken system in need of someone with the wand and the will to change it.  But in this fight for a better future, who will stand beside him?

”THE DALES ARE SUPPOSED TO BE SPECIAL!”

The beginning of this story is literally the beginning, as we see the moments immediately after the birth of Spencer Dales, his mother’s love and his father’s pride. Things progress quickly, showing us quick vignettes of his early years, each showing us in subtle ways that this is not the world we know, even though it’s clearly set in New York City. As he ages, Spencer shows very little aptitude for the magic that defines the Dales family and his father shows less and less patience with him. By the time he’s seven, Papa Dales has seemingly given up on Spencer ever being the next leader of the line, going so far as to imply that he’s not even his real son, which sparks anger in Spencer that eventually, finally unlocks his own power. Rather than ease up, the senior Dales increases the pressure on Spencer, having the other adepts give no quarter (read: beat him senseless) during their training sessions. When he finally makes it to Aegis Assessments (several years later than most students of magic), his fellow magicians make it as hard as possible, depriving him of his wand and kicking his @$$ to make a point… and that’s when Spencer makes an unexpected decision.

A DIFFERENT LOOK AT THE ‘CHOSEN ONE’ NARRATIVE

I like this story on a number of levels. First of all, it’s nice to have a secret society that isn’t all upper-class rich Caucasian people. Moreover, this book, while giving us a society where magic has changed many aspects of life, feels very personal and authentic. Writer Brandon Thomas says in the back matter of this issue that the missing piece of the story was one of legacy, and it’s easy to see that theme in this story, as Raymond worries that his son is the end of their family line. Spencer’s anger at having that put on his shoulders is understandable and makes his trials here that much more visceral for me as a reader, especially when his childhood tormentor leads the opposing force during his trials. The art is also pretty amazing here, with Randolph delivering a wide variety of characters, all with a wide range of expressions and varying facial features. (Spencer’s grandma is particularly vivid and full of life during her first sequence, as she cuts Spencer’s hair in preparation for his trial.) When the magical stuff kicks in, things get extra creative and dynamic, making me want more of this book, immediately.

There are some moments in this book that I am not sure about (and I’m a little leery of the fact that the Aegis has a golden rule about women not being able to wield magic), but they’re mostly carried along by the strength of a narrative that tweaks all the Harry Potter clichés into something modern, clever, and most of all, new. Excellence #1 has some really impressive art and does a LOT of world-building successfully, but manages to keep the story all about Spencer, his family and his feelings, pulling off a tough balance with aplomb for 4.5 out of 5 stars overall. I like this book.

A new take on some familiar territory, with a powerful emotional core.