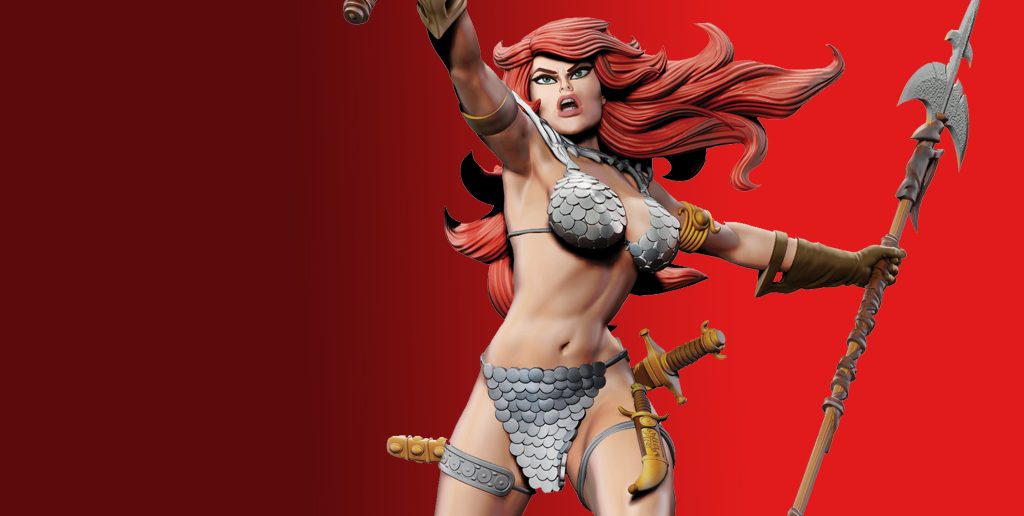 The She-Devil with a Sword strikes on Indiegogo! Bring the legendary heroine into your collection with a high quality 1/6 scale resin collectible statue, produced by Dynamite, and now the feature of their very first major preorder campaign on Indiegogo. Sonja’s striking looks, fearsome pose and deadly weaponry in this piece are inspired by her first truly definitive artist, Frank Thorne! Pledge now to preorder the statue and check out other extras in the campaign for more value! 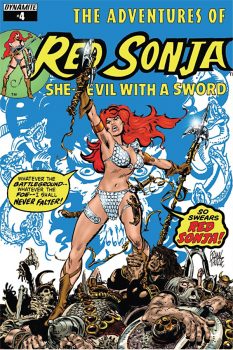 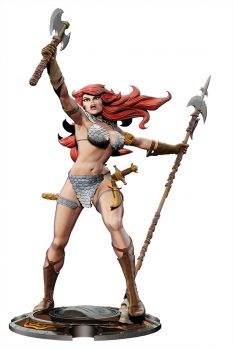 Thorne’s definitive style is brought into the third dimension and your collection in this 1/6 scale collectible statue sculpted and painted lovingly based on the cover to Marvel Feature #4. The Steve Kiwus sculpted piece stands a stunning 12.5 inches tall and features Sonja in a classic pose.

Through her nearly 50 year history, many artists have left their mark on the She-Devil with a Sword. Arguably none have impacted the heroine quite like Frank Thorne. His clean lines, fluid action and slight hint of eroticism on Red Sonja catapulted the character from a supporting footnote in Hyrkanian lore to a worldwide fan-favorite solo star. Through his judging of “Lookalike Contests” in his “Wizard” persona at early conventions, Thorne and Sonja fans even contributed to the rise of cosplay!

After contributing for a few years to western, war and mystery anthologies, Frank Thorne’s popularity exploded when he was handed the artistic reigns of everyone’s favorite Hyrkanian hero. Across barely a three year run, his Red Sonja work cemented him as one of the most treasured and respected artists of the era. Thorne then opted to venture into more independent and risque waters, with his creations the barbarienne Ghita of Alizarr, the Barbarella-esque Lann and other characters for such prestigious publications as Heavy Metal and Playboy.

The statue is also available in black and white and “berzerker” editions and backers can even upgrade to get a limited edition marked and numbered Proof edition.

“The Vampirella Statue by Jose Gonzalez celebrating her 50th anniversary was such a success that we knew fans deserved a classic Red Sonja statue to match! But to have a great piece capturing the essence of Frank’s artwork, we needed a sculptor who would create the most compelling statue, and that is Steve Kiwus. I’m proud to be working with someone as talented as Steve to bring Frank Thorne’s great 2D cover into a great 3D statue!,” said Nick Barrucci, Dynamite CEO and Publisher. “No artist defined our fiery-haired heroine more than Frank Thorne and fans will love this piece!”

Backers can choose from a myriad of captivating rewards, to complement the centerpiece statue or to support the campaign at their chosen budget. A selection of graphic novels have been chosen that reprint or represent the Frank Thorne era of Sonja, particularly in the Adventures and Further Adventures of Red Sonja collections. Or go big with the three volume Red Sonja by Frank Thorne Artist Editions, reproducing his peerless original art at original size. Deluxe hardcover art books are also available to wonder at the artwork produced through the years. And don’t forget the cute Frank Thorne Red Sonja enamel pins!