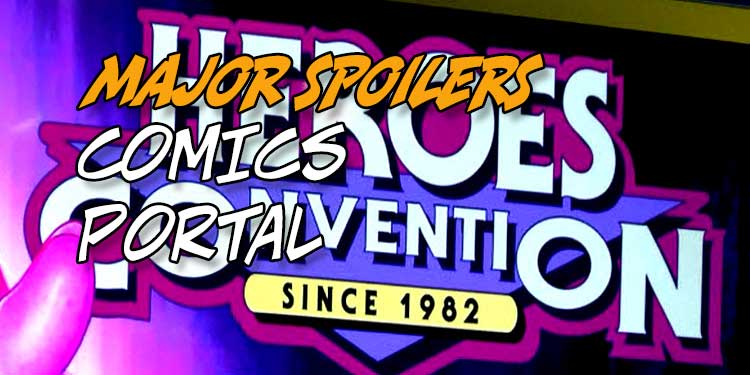 COMICS PORTAL: No One Can Make Just One?

This past weekend, I attended the 2019 Heroes Con in Charlotte, North Carolina, one of the biggest comics-oriented conventions around! There were comics creators galore, including many wonderful “name” folks such as Sergio Aragones, Charles Vess, John Beatty, Mike Zeck, Ron Randall, Karl Kesel and lots of Indie comics creators! It was a big comics fest!

One of things I noticed as I checked out the Artist Alley and Exhibitor booths was that most creators had more than one creation available for fans. I was reminded of the old potato chip commercial that said, “no one can eat just one.”

HOW WAS HEROES CON? Heroes Con is a big one to me because, a few years back, Stabbity Bunny actually debuted there. So when the opportunity arose for us to be at the Scout Comics booth this year, we were happy to oblige!

I think this year may very well be the highest-attended Heroes Con ever! Each morning, there were long lines of fans waiting to get in, and I often noticed that the aisles were pretty well full most of the time. Of course, Friday was probably the least-attended day, Saturday the highest, and Sunday somewhere in-between.

One thing I really enjoyed was that many of the “name” creators were spread across the Artist Alley and other locations. That’s good because having them all in one location can make fans cluster in that single place instead of checking out other aisles on the floor. I think fans and creators alike preferred this year’s arrangement.

As always, Heroes Con focuses on comics rather than pop culture stars, and that makes them a favorite among comics creators. Yes, there are also a lot of artists and other craft folks there to tempt attendees as well, so there are buttons and posters and t-shirts and other good things all across the con.

The only thing I was disappointed to discover was that a parking lot located across the street from the convention center was now under construction, with a multi-level building on its way to fill the space. In years past, we had been able to park there and roll our stuff into the center. We couldn’t do that this year, and we have to continue to figure out how we’ll handle that moving forward. Oh, well! They don’t have any control over that, anyway!

Overall, I’d say it was yet another successful Heroes Con, with plans already underway for 2020. I want to be there when it happens next year!

CREATING IS A HARD HABIT TO BREAK

Cons like this one help me catch up with some of the folks I’ve interviewed on my podcast, to see what they’ve been up to since we last spoke.

This year, I caught up with folks like Ben Kahn, who wrote Heavenly Blues, a Scout Comics series I really enjoyed. He’s got a new series called Gryffen: Galaxy’s Most Wanted that I picked up, and that first issue will be something I’ll read as soon as I can.

I also came across Seth Talley and Shawn McCauley, the folks who make Shadows of Oblivion, a great Indie book. They had a new one-shot in that series called “Better Days,” and a new comic called Dalrak The Mighty, which really caught my attention.

The reason I bring them up, besides taking this chance to give them some well-deserved attention, is to point out that they continue to create new works for us to enjoy.

And this is true of many of the folks in the industry I know, including James Haick, Jim Pruett, Richard Rivera, and many others. One book is just not enough, it seems!

Granted, if your experience on your first comic is a poor one with little recognition or success, or you run out of funds to continue, reality gets in the way of creating and you have to stop for now.

But I personally know several in the industry that have to take a break for a while, then they get back to bringing their ideas and stories to life as soon as they can. There is something special about telling a story, particularly one that gets a great reaction from those who read or hear it. It’s a connection that a storyteller thrives on, so it can be very addictive to a creator who often spends much of his or her time alone writing or making art in any form.

It’s something special, and many creators try to exceed their fans’ expectations, hoping to get that all-important “WOW” when they see what they’re getting.

When that doesn’t happen, well, the next time, that storyteller will work even harder to get that reaction.

Then, too, creators are often trying to “top” themselves, tell even better stories, get even better reactions, touch more lives.

At a recent con, I told writer J.M. deMatteis, “I bet you get tired of people telling you how much they love your writing.” His response? “Never!”

So, if you enjoy a creator’s works, by all means, let them know! You just might inspire his or her next story, and it might help them tell stories you’ll love even more and touch you even more!