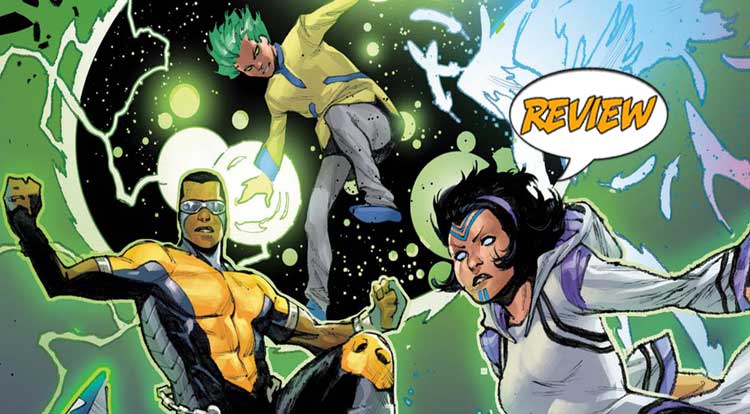 It’s an army of young heroes versus an army of Asgardian undead.  Place your bets!  Your Major Spoilers review of Champions #6 awaits! Previously in Champions:  The Champions have had to put aside their problems to face the War of the Realms!  The Dark Elf King Malekith and his allies have brought their war to Earth, the last realm standing!  Can Kamala Khan keep the biggest assemblage of teenage heroes in recent memory together against their biggest challenge ever?

With the invasion of Earth by Asgardian forces under Malekith, the undead armies of Niffleheim have claimed South America, leading to this issue’s Champions squad (Ms. Marvel, The Patriot, Power Man, Snowguard, Viv Vision, The Falcon, Bombshell, former New Warrior Hummingbird, Dust Pinpoint and The Locust) crashing headfirst into an army of zombies. There’s a lot of combat in this issue, but when The Champs successfully knock back the undead, they are confronted with an army of Disir, basically undead Valkyries. That is a much more difficult battle, and one that goes south when the leader of the DIsir shows Kamala her recent death, undone by Mile Morales thanks to a deal with the literal devil. Power Man leaps in to defend his team leader, only to be run through with a sword. As the Disir gloat to the stunned super-teens, Power Man pulls the blade from his chest, reminding his would-be murderer of how his powers work: Mythology powers his chi, and a huge army of warriors from a world full of history turn him up to eleven. As a giant Power Man leads the charge, The Champions swiftly dispose of the Disir, leading to the moment I never though I’d see: Ms. Marvel steps down as leader of the Champions

DID *NOT* SEE THAT ENDING COMING

This issue pulls off the difficult trick of continuing the ongoing storylines of the comic while tying in to the big crossover madness, with Ms. Marvel finally discovering the truth about her death and resurrection, as well as some character moments for Power Man, The Locust and even Hummingbird, whom I frankly never expected to see again. Zub’s idea of a Champions army is a great one, in my opinion, and the fact that this issue has TEN supers in play is a great use of characters who might otherwise languish in limbo. That said, Bombshell gets barely a line in the issue, and I would have liked more from Snowguard, but that’s the downside of a big cast. The plot is pretty straightforward, but it does have the “HELL, YEAH!” sight of a giant Power Man knocking aside Asgardians like tenpins, and it does give important roles to both Dust and Hummingbird, so I’m willing to forgive that, especially since the most important drama is all interpersonal. (Which, honestly, is as it should be with a teen team.) Juanan Ramirez is a new name for me, but one that I’ll be watching out for, as their rendition of all-out battle is impressive, and all the character “acting” is top-notch. Special attention must be given to Ms. Marvel’s horror at seeing her own death and Power Man’s cocky smile as he grows to giant-size.

In short, Champions #6 has to achieve a delicate balance of character against the giant set piece of ‘War of the Realms’ and manages it admirably, with only a few moments standing out as difficult, with strong, charismatic art to make it sing, earning 3.5 out of 5 stars overall. Next issue promises more outer-space action with the once and future Nova, another sub-plot that has been bubbling throughout this entire volume (and the previous one as well), and even if we don’t get to follow up on what happens here immediately, I’m sticking around for more of Zub and Ramirez (and maybe even more abandoned Marvel heroes.)

The big fighty-fighty makes the plot a slow-burn, but there's a lot to like here, with some great Ms. Marvel and Power Man character moments.