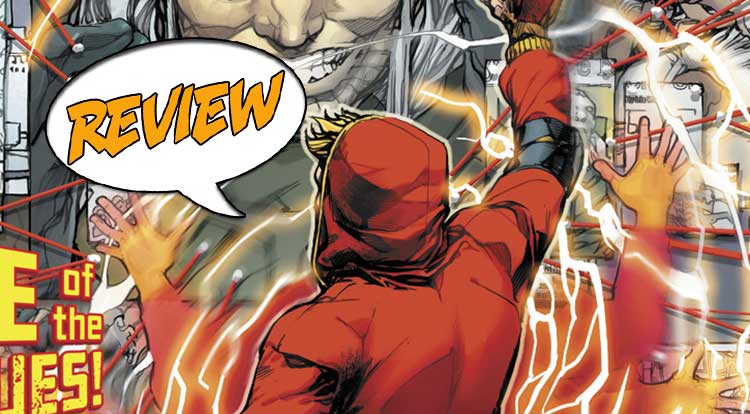 Piece by piece, Barry Allen’s world is falling into place.

In this retelling of the origins of The Flash, we’re seeing the beginning of his rogues’ gallery. We’ve seen the Turtle – who’s next? Find out in The Flash #72! Previously in The Flash: As we revisit Barry Allen’s origin story, he finds himself in a dystopian future, where Central City is ruled by The Turtle, and where he meets his future self. He’s flung into the action, and sees his future self as a superhero even as he’s barely adjusting to his powers. The Flash digs up the Cosmic Treadmill, fixes it, warns Barry about time travel, and sends him home. Once there, on his way to a date with Iris, he sees The Turtle in his own timeline, and confronts him.

GROWING INTO HIS ROLE

It’s challenging to keep an origin story fresh, and The Flash #72 does some things that succeed for me and my enjoyment of it. We open with Barry heroically taking on The Turtle without thinking it through first. The Turtle’s powers cancel out his own, and he has to come up with another way to defeat him. I like seeing a little more of a Barry Allen who is still learning how to superhero, and trying things that work, but perhaps with unintended consequences. He takes out The Turtle, and is so fast that no one else really sees anything.

Barry remembers his coffee date with Iris, and meets her, looking as though he was in a fight. Instead of coffee, they go out for breakfast. This segues into a nice double page spread where we see Barry rethinking his life and the possibility of becoming a hero, and it’s frankly optimistic. The dystopian future from last issue provides the motivation, which I can get behind. (And I like that it kicks him out of his funk, because I get easily tired of mopey heroes.) It’s almost a little cutesy how they explain everything – like the lightning bolt becoming his symbol (painted on a nearby wall) because of the lightning storm. On the other hand, the secondary explanation about how he goes back the next day and cleans it off is just funny and fits his character perfectly.

Iris starts investigating the Flash even as she’ seeing Barry more. They do keep running with the “Barry is always late,” gag – which is just classic for him. She also lets drop something about a criminal she’s looking into, Clive Yorkin, possibly a murderer. She gets a message that Yorkin is running with a new gang and runs off. Barry goes back to work on one of his own cases, and following a clue leads him right into Clive Yorkin and his new gang.

But Yorkin is not the boss –that’s another guy, named Snart. As if on cue, Iris shows up and starts questioning Yorkin, and things escalate into a shoot-out where Barry rushes in to save Iris. Again, Barry is rushing in without thinking things through, and there are consequences he has to deal with. I like the introduction to Snart as a fairly small time criminal here, so there is room for the story to grow.

TIME PASSING BY IN A FLASH

The art of The Flash #72 is solid. The issue covers a lot of ground and a lot of time, flashing back to the past and capturing things going on in the present. The art does much of the heavy lifting here to keep this clear for us. Again, there’s a lot of use of smaller panels to show us a lot of things happening over time, and it’s an effective use of the technique. The contrast also helps the larger splashes to really pop.

Character expressions are great here. It’s early days for The Flash – Barry takes some injuries, including serious ones. He’s still getting used to his powers, and you really get a sense that at times, he’s ad libbing madly. He doesn’t look like a cool, confident hero yet – he looks like someone who’s juggling chainsaws and hoping like mad that he doesn’t drop one on his head. I also get a kick out of his costume, which is still developing and looks like it’s put together out of stuff he can find in his closet.

BOTTOM LINE: AN ENJOYABLE TAKE ON A CLASSIC

I enjoyed The Flash #72. It’s probably no surprise that I’ve been a fan for some time. But I do like this take on him, and I think it’s a nice introduction to Barry Allen as The Flash.