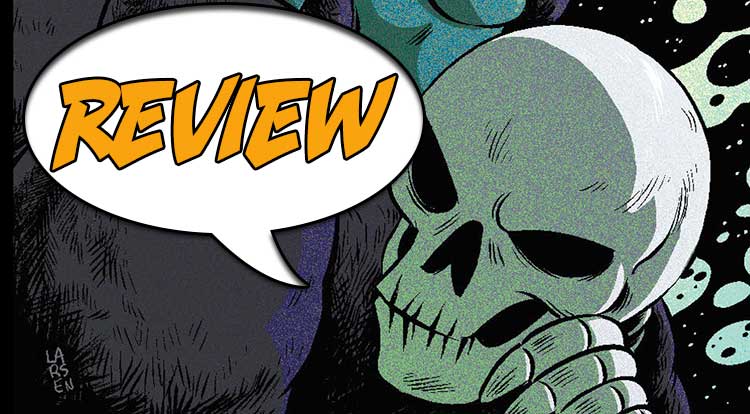 Can Gardt and Klay save the Otherworld from destruction? And what will ultimately be the legacy of CharlesCo? Find out in the conclusion – By Night #12! Previously in By Night: Jane and Heather make one final foray into the Otherworld with Gardt, this time to find Chet Charles. He felt guilty about sending the General and his men through the Eidolon, so he came through himself to find them. When he could not, he simply stayed. When the remains of the General and his men were found, he was accused of leading an invasion and sentenced to Mount Eucchurus. Instead of languishing there, he hollowed out the mountain and started causing chaos. Eventually, the girls bring him back to Earth, where he decides he wants to use the Eidolon one last time – to destroy the Otherworld!

ALL THINGS COME TO AN END

By Night #12 opens calmly enough with Chip bringing Chet Charles and Dr. Gramercy to the Eidolon, which has been sabotaged again. But who would do this? Chet says the important thing is whether they still have the schematics, and Chip plays dumb. Chet and Gramercy leave to get a drink, and Chip asks Heather if she did it. She says she did not. Joan arrives, full of ideas for how to get rid of Chet. But while Chip gave most of his life to CharlesCo, he isn’t joining her new company.

At the bar, Dr. Gramercy wonders about the ethics of destroying the Otherworld. Chet has no such qualms. And unbeknownst to them, the short guy in a hoody across the bar from them is Gardt. He damaged the Eidolon – and that still isn’t enough? Klay says there’s only one way to stop him. Gardt will not take Chet’s life – he was a friend. This argument splits them apart literally, as Klay pulls free, leaving Gardt’s body in the back hallway.

Time passes. There is a scream from the bathrooms. Chet Charles is dead, and Tabitha and Dr. Gramercy are standing by the body. The police are called, and after some investigation, they decide to arrest Tabitha. Dr. Gramercy steps in and takes the blame. Jane, Barney, and Heather arrive, and not only is there they moment of “What’s going on?” but there’s also the realization of, “What do we do now?” Jane and Barney have probably just lost their jobs. Jane feels like this was all her fault. Oh, and to cap it off, Barney’s Canadian girlfriend shows up.

The story closes with an epilogue about where everyone is a year later. Insectivora, the bug protein company, is a thing. Jane makes a documentary about the town itself and its decline, to much local acclaim. Heather has become an artist. Chip is running for sheriff. And all the footage of the Otherworld has been destroyed. And Gardt? He’s stranded in the real world, enjoying old magazines.

Something I really enjoy about this story is how it wasn’t just about the mystery of CharlesCo, and it wasn’t just about exploring the Otherworld. It was about how experiences can change people, for good or for ill. So many characters were affected by the Otherworld, and their lives all changed, sometimes in surprising directions. Seeing that unfold ultimately makes this a satisfying read, and makes the conclusion that much more meaningful.

FROM A MURDER TO A BRIGHTER FUTURE

I like how the tone of the art in By Night #12 shifts from the darkness of the main story to the relative brightness of the future, as everyone moves on. It also flows seamlessly through pretty much the entire cast of characters as everything draws to a close. It also seems to be that almost no one else agrees with Chet about destroying the Otherworld, which sets up the murder. The panels where Klay emerges from Gardt are almost shocking, particularly since Gardt has been set up as this rather funny, innocent, clueless fellow. And Klay turns out to be quite literally Gardt’s skeleton.

The epilogue, in contrast, seems so much brighter. Every character that appears has changed, just a bit, so we really feel that time has passed. I like the artsy version of Heather, and the more focused version of Jane. And I love the little ending with Gardt, who also appears to be pretty content.

BOTTOM LINE: DEEPER THAN THE DEATH OF A TOWN

By Night #12 brings the series to a satisfying close. I like how it has blended some truly serious moments along with some genuine goofiness and humor. This is far more than a romp through a fantasy land – it is a story about us, as humans, good and bad, and what we tend to do when we discover new places. Come for the wacky story, but stay for the thoughtful moments throughout.

By Night #12, where people’s lives are shaped by the decisions that they make and the secrets that they keep.