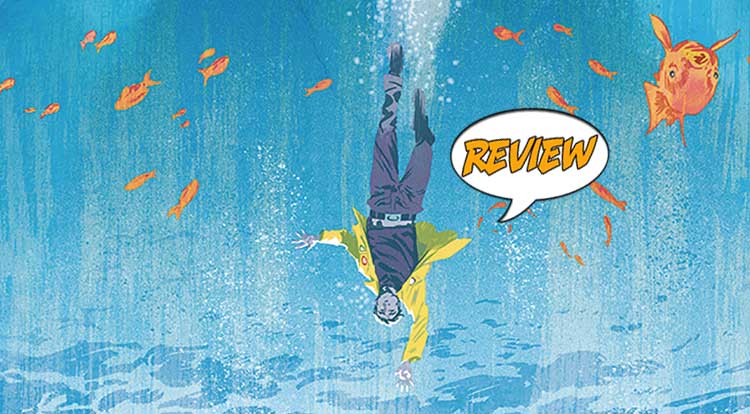 Better.  Stronger.  Faster.  And currently sinking to the bottom of the ocean…  Your Major Spoilers review of The Six Million Dollar Man #4 awaits! Previously in The Six Million Dollar Man:  Steve Austin’s body is rapidly decreasing in value, due to samurai swords, KGB agents, and lightning.  Still, he’s determined to save the world… except that he’s been beaten up and thrown underwater… and the scientists that rebuilt his body didn’t think to make him buoyant.

Colonel Austin ended last issue by being thrown off the boat he and agent Niko Abe have been using for their spycraft shenanigans.  As he sinks to the bottom of the bay, Niko is forced to face a pair of would-be assassins, including her own cousin, in mortal combat.  When Steve hits bottom, he realizes that swimming is not an option, and ends up waiting for some sort of lifeline… which arrives attached to an anchor…  that hits him in the head.  Fortunately, his cybernetics are working at the time, keeping him from a fatal injury, and when he is hoisted back to the ship, he finds that Niko has murdered her assailants.  It’s a devastating moment for the young spy, but she continues focusing on the mission even as Steve complains about how he doesn’t really care for all the chicanery of spycraft.  Making their way to an island airport, they try to call for help, only to end up capturing a squadron of Russian agents.  But when they find that the real threat is still out there, intending to kill the Vice-President, Niko and Austin are forced to coexist with the men from the other side of the Iron Curtain.

The first thing I like about this book is the setting: It stays firmly in the 70s, allowing Steve Austin to wear a variation on his trademark leisure suit look while keeping questions of digital communication and GPS out of the question.  Hahn’s Six Million Dollar Man seems younger than Lee Majors did, but it works within the story, as the Air Force man has to learn that he can’t trust anybody in his new line of work.  The moments where he uses his super-powers (when they’re not on the fritz) are handled well, balancing the medium of comics against a story that wants to be more realistic, with only the bionics as an over-the-top element.  Hahn’s art almost feels like TV’s ‘Archer’ in all the best ways, with expressive faces and well-drawn technology drawn equally well.  Hastings’ script is likewise well balanced between the funny and the serious, and the final sequence of Steve heroically leaping from plane to plane is wonderful…  especially when he misses and crashes to the beach with a crash.  I had some issues getting my bearings in this story, and there are some clarity issues in storytelling throughout the issue (a sequence where Steve attacks the Russians is an example of a sequence I had to read twice to figure out) but overall, it’s a nice book.

That last page impact is clearly going to lower his six million dollar price tag that much more (this issue is titled “The $68,0004 Man”) and comic Steve is clearly more powerful and versatile than his ABC TV self, but all in all, this is a truly good read.  The Six Million Dollar Man #4 makes for a nice balance of humor and action, with a likeable protagonist and even the weaknesses of the storytelling and the abruptness of the ending don’t dull it’s edge, with the strong art making for 3 out of 5 stars overall.  I’m not sure if this is an ongoing or a mini, but I’d really like to see this team’s take on Bigfoot, so I hope it keeps going, one way or another.

Our hero spends this issue out of his element, literally and figuratively, and ends with a scene that's both tense and kind of funny... A fine achievement.