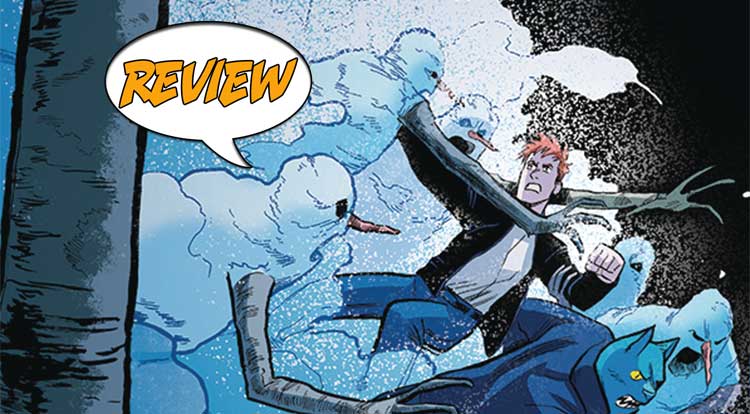 8.3 Edge of Your Seat Story

After chasing the maniac “Roach” Riley through the city, Spencer and Locke were buried under tons of rubble and debris. However, the world does not stop because of one man, not even in the mind of our hero. A buried Locke finds himself battling mutant Nazi snowmen while his daughter takes matters into her own hands. Let’s take a look at an advance copy of SPENCER & LOCKE 2 #3, out from Action Lab – Danger Zone this week, June 12th! Previously in SPENCER & LOCKE: Locke has been arrested and taken in for a hearing to decide his fate when it happened, the psychopathic killer known as “Roach” Riley launched his attack on the city, his own little endgame. After the madman drives a tank into the very courtroom where Locke was being railroaded arraigned, the detective launches himself into pursuit mode with his partner Spencer by his side. By the end of the chase, he and Spencer are buried under a mountain of rubble, their very survival in doubt. It was then his young daughter Hero made the decision to make her father proud and strike out against the murdering exterminator. Our last image is of Hero are of her taking up arms in preparation to join the battle and make her father proud.

A MIND IS A TERRIBLE THING TO WASTE…

In the past, we see our future. It is into the past of Roach Riley we begin our journey this month, as we see him and a fellow soldier, a chaplain, prisoners of some unknown enemy. While the man of God prays for their rescue, Riley thinks of other, darker things. The prisoners ran out of food weeks ago, and Riley’s hunger leads him to perform the unthinkable. Rescuers find him over the body of his fellow soldier, doing what he must to survive.

In the now, the city burning. The Mayor is on a rooftop meeting with Police Commissioner Dan Tiffany. His chiseled profile and red suit standing out against the skyline, never suspecting that the helicopter coming toward them was a trap. After it crashes against the rooftop, a bloody and bleeding Dan Tiffany looks around to assay the mayhem. The Mayor is dead, and a man is landing his parachute on the burning rooftop amid all of the wreckage. “Roach” Riley has arrived, and the only thing he brings with him is death.

Detective Locke is oblivious to this. He has awoken in a snow-covered landscape, and the world is at war. He remembers his mission, get to Berlin and stop the Nazis from completing their super weapon and turning the tide of the war.  Between him and his mission, Nazi mutant snowmen. At his side, an enigmatic soldier who introduces himself Colonel Spencer Pantherton the Third, of her Majesty’s Royal Panther Division.  He has found Locke and must help him complete his mission. But the mutant snowmen have their own ringers in the forms of simulacrum of Locke’s parents, and they are more than willing to continue the punishment they began in his childhood. It is not long before the abominable snow monsters overtake our heroes, and put the outcome of the mission in doubt.

Back in the real world, the television news has continued reporting on the attacks and the assassination of the Mayor. Comptroller Hal Forrester is on the scene to organize the city council and has a proposal to put an end to the violence. Meanwhile, a large bat-like creature has been seen on the east side. Could this be Hero, now known as Captain Astounding and her pink stuffed sidekick, Mr. Rabbit? What can she do to fight back against the onslaught of Roach Riley? What clues did Miranda Mercury, Star Reporter, uncover in her investigation at the military base which leads to the Fairfield Military Cemetery? Heaven only knows what she could be digging up.

TRAPPED IN THE LABYRINTH OF IN HIS OWN MIND…

This is another great issue in the Spencer and Locke saga, and the quality of the story continues. Far from the average gritty crime story, or psychological reconstruction, or even four-color heroics, this tale has been a strange amalgamation of all that and more. David Pepose has continued to weave a tale of a man struggling with the pain of his path and the effects it has on his present, while at the same time trying to make the world a safer place for his daughter. Locke is broken; you only have to see him as he interacts with Spencer to understand that. Pepose takes the horrors abuse and alcoholism can have on a young mind and gives it voice in the form of Locke. The fact we are seeing this through the eyes of a familiar character, one who echoes another whom so many have fond memories of, makes it even more compelling and heartbreaking.  The final page reveal is one which will have you demanding to see what happens next.

Bringing these characters to life is artist Jorge Santiago, Jr. He continues his wonderful art has here, occasionally mimicking and adapting the styles of classic artist such as Mort Walker and Bill Watterson, while keeping his own style prevalent and at the forefront. There are some nice panel designs to be seen here, including the adaptation of sound effects as borders and the use of a figure to lead the eye around the page, bridging the evens. Another part of the team, colorist Jasen Smith (Karma Police, Return of the Super Pimps), contributes his eye to this, and adds just enough to each page to connect all the right aesthetic dots.

I’ve followed this series since it began and to be honest, it is one that I look forward catching up with each month. Others have been attempting to combine childhood cartoons and shows with modern adult stories on television, and they all seem forced and soulless. While they depend on the shock factor to push their story, Pepose uses honest to goodness quality storytelling and heart. He knows these characters, has their lives mapped out, and it shows in the storytelling.

SPENCER & LOCKE 2 #3 continues the blend of psychological thriller, fast-paced action, and story developments to keep you glued to the page in anticipation. Make sure you check it out.