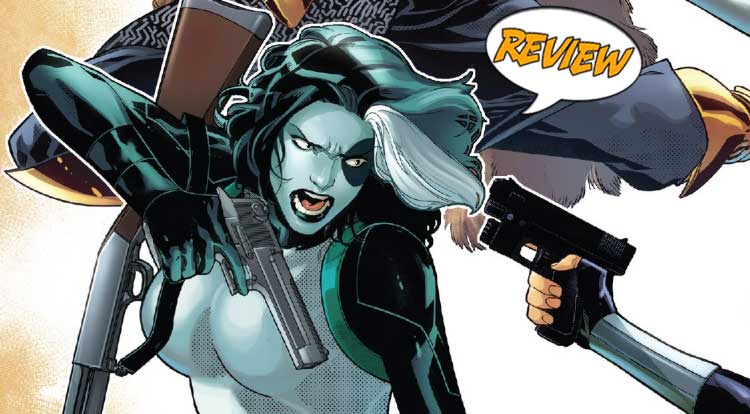 Domino and her friends have contracted a cosmic infection, and now all seems lost.  Your Major Spoilers review of Domino: Hotshots #4 awaits! Previously in Domino: Hotshots: The immense power of the Creation Constellation is in reach!  The only thing between it and Domino’s squad is… each other?  Which of these knockouts is gonna get knocked out?

This issue opens with first-person narration by White Fox, who reminds me as a reader that the Marvel Universe is much more than New York, and that everyone who isn’t in the Avengers knows about it.  “The Avengers are supposedly non-political”, she muses, “yet their leader wears an American flag.”  She understandably wants to have at least once magical god-power end up somewhere else, leading to her attacking the possessed Domino and company.  Their battle rages for a moment until Domino reveals that she has been given control of several Stark drones (powerful Iron-Man-styled automatons) and shuts it all down, instead redirecting their number, minus the too-ambitious Fox, to find Dr. Mazarov, the first man to get the Celestial infection.  They all attack, en masse, and Domino finally embraces the power within her to overcome not only Mazarov the new Celestial, but the alien circuitry inhabiting her and her friends.  They return home, content, sending Deadpool on his way and welcoming their new Wakandan member.  It’s a satisfying close…

…until the OTHER Celestial-infected scientist attacks at full-power!

FEELS LIKE A LAST ISSUE… UNTIL THAT FINAL PAGE

Because of my insistence on identifying how many issues are in a miniseries during my review, I spent the second half of this book thinking to myself “Wait, this can’t actually be the end!”  Turns out I was right, and even better, Simone, Baldeon and company wanted to make sure that I did, lulling me into a sense of overconfidence until they could kick me in the metaphorical gut.  I really enjoy David Baldeon’s art, combining just a tiny bit of cartoonishness in his facial expressions with solid anatomy and really impressive battle sequences.  Outlaw, who spends much of the issue stuck at 30 feet tall, gets a couple of really great shots in, and Domino’s Celestial transformation is shown with a subtle and clever white circuit pattern over her black eye “patch”.  Perhaps my favorite part of the issue comes when Domino realizes that neither she or any of her friends is well-suited for cosmic power and that they’re best-served not ever having it in the first place, making for an oddly philosophical take on the “what to do with cosmic power” question.

With the exception of Black Widow and the occasional Deadpool story, I’ve never been a fan of any of the characters in this book before the recent Domino series kicked off, but now I really find myself fond of Diamondback, Outlaw and even White Fox.  Domino: Hotshots #4 is impressive in story and in art, combining seamlessly to tell a chapter with massive cosmic implications that’s really all about perfectly normal people, earning 4.5 out of 5 stars overall.  I’m not sure how this is all going to shake down next issue, but I’m really enjoying the ride.

It's a book that makes you feel for the brand-new White Fox, the heavily exposed Deadpool and the enigmatic Domino equally and looks great doing it.