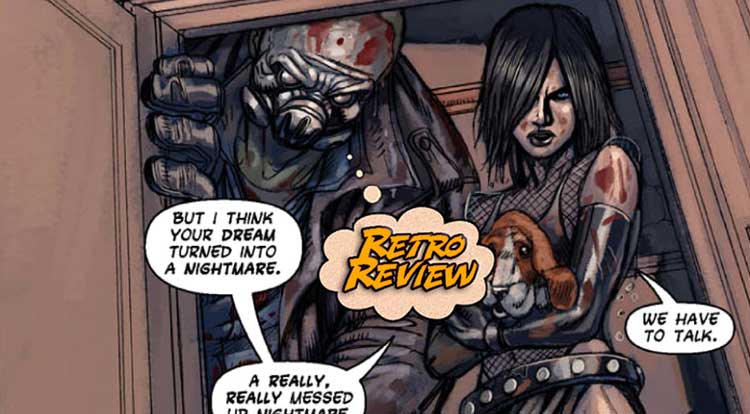 When slashers attack, Cassie Hack is there to destroy them…  but is she really just like them?  Your Major Spoilers (Retro) Review of Hack/Slash #1 awaits! Previously in Hack/Slash: Cassandra “Cassie” Hack, daughter of Dr. Jack and Delilah Hack, grew up in western Wisconsin.  Her father left soon after she was born, leaving Cassie with her overbearing, eccentric mother who worked as a cook at a nearby high school.  A timid wallflower, plain-looking and unattractive, young Cassie was verbally and physically abused by her classmates.  Never having a friend, Cassie was ostracized because she wasn’t pretty and was poor and ill-dressed.  This prompted her unbalanced mother, the “Lunch Lady”, to kill every child at Cassie’s school that had somehow hurt or insulted Cassie and serve them as the school food.  Cassie, witnessing her mother’s last killing spree, promptly called the police. She managed to save the life of her mother’s last victim, but was forced to witness her mother’s death when she committed suicide.  Now, she hunts Slashers like her mom, which is why this issue opens in the eerie dusk at a summer camp reminiscent of the one from ‘Friday The 13th.’ .
Sneaking out into the woods with the hot cheerleader, young Dan seems like a fine upstanding, albeit a little bit hormonal, young man.  He even warns her about the disappearance of other girls in the woods, teasing her that there might be a killer in the woods, all the while unaware of the hulking masked man dogging their footsteps.  Dan tells her to turn around so that he can give her a little surprise which she turns into an innuendo that he completely misses, implying that she had hoped his “surprise” was bigger.  That’s when everything we know suddenly turns out to be wrong! I’m not always a fan of the giant storytelling swerve, but this issue pulls it off perfectly, with Dan revealed to be the murderer, the masked monster the good guy and the cheerleading damsel in distress?  She’s actually the brains of the outfit and the protagonist of our story.  Stefano Caselli’s art is just cartoony enough to keep the blood and guts from being TOO graphic, but expressive enough that you can see the confusion and pain in Dan’s face as he is skewered from behind, Geoff-Johns-climactic-reveal-style.  We immediately transition to a short origin for Cassie, explaining how her mother was a Slasher, how she took to hunting them down, and even how she med Vlad and befriended him, adding his physical prowess to her detective skills and Hot Topic wardrobe.  It’s a really great use of exposition, followed by the setup of our new story as a young couple is attacked by what seem to be zombified animals in the woods of Indiana.  Cassie and Vlad see the news in the paper and make their way to the town’s animal shelter… This awesome poster-style shot is excellent (and even better, the only example of beauty-shot penciling in the issue, making it stand out even more) leading to Cassie and Vlad trying to interrogate the veterinarian.  After initially getting rebuffed by the yokel cops, the slasher returns and nearly kills the vet, only for Cassie to intervene and get the truth: He and his friends had killed a young developmentally challenged boy who used to work at the shelter, and even though it was an accident (sort of), they think it’s him returning for revenge. Even though she believes that Dr. Kyle deserves the fate that the Slasher has in mind for him (and the story makes me pretty sure that he does, so kudos to Seeley’s storytelling skills), Cassie agrees to help take down the undead Bobby…  who suddenly arrives!  Kyle realizes that she’s been using him as bait, while Bobby seeks out Kyle’s girlfriend and fellow vet Lisa, who is forced to put him down.  The only real complaint that I have about the art in this books is how heavy-handed and dark the coloring is, especially during the climactic sequence of the story. The comparison between Bobby and the unwanted pets that she has to put to sleep is…  more than a bit heavy-handed for me, but overall it works, with Kyle’s life falling apart even though he didn’t get murdered, and Lisa gets a new lease on life.  As the story ends, Vlad and Cassie are on the road again after she admits that she worries she’s just another murderer and he admits he liked seeing her in the cheerleader suit.  Eww.  It’s a solid one-shot story, and it’s clear from this very first story that Cassie’s world is well conceived and (you should excuse the expression) fleshed out.  Hack/Slash #1 has some wobbly moments, but the art is strong, the story is fascinating and neither the cheesecake nor the carnage is overwhelming enough to wreck the fun of seeing monsters get their just desserts, earning 4 out of 5 stars overall.  The fact that we are made to empathize more with the zombie murderer than with his chosen victim is proof enough that this series is something remarkable.

I never read this book when it first appeared, but I really regret that after reading this ish, as I imagine the twists and turns were even more breathtaking when you don't already know the premise and the art is excellent.