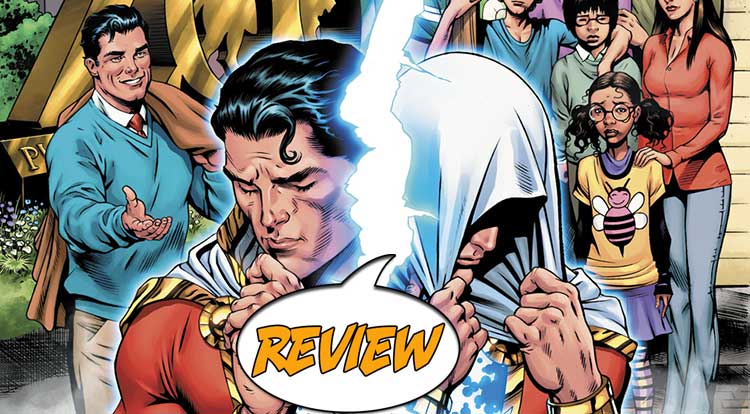 On their way to rescue their siblings, Billy and Mary get thrown back into the real world where Billy meets his father. But what about the rest of the kids, stuck in the Magiclands? Find out in Shazam! #6. Previously in Shazam!: Black Adam arrives at the Rock of Eternity and is perturbed to see that the doors to most of the Magiclands have been opened. He is determined to go to the Funlands and destroy Billy Batson. In the Funlands, King Kid has enslaved Mary and is intent on enslaving Billy in his adult form, unless he relinquishes his power. Billy frees Mary so she too can transform. In the Gamelands, Eugene is sure that he’s found his destiny – to race against the Gamemaster and earn his and Pedro’s ticket home! But, oh, the irony – Eugene has lost so many points that he cannot stay on the level where he can challenge the Gamemaster – but Pedro does. In the Wildlands, the court sentences Darla and Freddy to be eaten by tigers. And Black Adam comes face to face with Dr. Sivana!

Shazam! #6 opens again in the Funlands, where Billy and Mary fight their way free and start a revolt among King Kid’s enslaved adults. They fly up to the hallway of doors, and Mary remembers someone mentioning the Wildlands, so they go through that door. Even as they do so, the magic of the tunnel starts collapsing around them, and instead of getting to the Wildlands, they end up back at home. Billy wants to go back immediately to find the others; Mary wants to tell Victor and Rosa something about what’s going on. They tumble downstairs and Billy comes face to face with his dad.

So why did the tunnel collapse? It could be because of the right between Dr. Sivana and Black Adam. Adam wants to find Mr. Mind, who is already working with Dr. Sivana and who apparently has some pretty big plans. For as little as I’ve seen of Mr. Mind so far, he is a fascinating villain. Sivana knocks out Black Adam and drags him back to the Rock of Eternity.

Then we get to see Billy’s origin story. He’s born during a (possibly prophetic) thunderstorm to loving parents. In a bit of foreshadowing (I’m sure), his dad takes him to the zoo every weekend, where Billy loves the tigers. At some point, Bill’s dad went to prison. He’s out now, looking for Billy first, and now wanting to find Billy’s mom.

Eugene and Pedro’s story serves as the comic relief. In the Gamelands, where everything you do counts toward your overall score, Eugene keeps losing points and Pedro is the only one eligible to drive in the race to try to get points. Neither of them actually know how to drive, but that doesn’t stop Eugene from shouting out instructions. They get lost from the race, and the wizard – the one who gave Billy his powers, arrives. Now that was a bit of a twist.

Life is turning upside down for everyone. Victor and Rosa beg Mary to tell them what’s going on, and she does. She realizes the words make no sense, and she shows them, by transforming before them, that she is a superhero, as are all their kids. I really like her trust and honesty with them.

I think the art in Shazam #6 continues to be solid. This issue is an emotional roller coaster for several of the characters, and it really catches those moments. While most of this rings true, the only thing that feels kind of rushed for me is Billy’s reunion with his dad. It’s not clear how long they’ve been looking for each other, and while I like how unreservedly they reunite, I can’t help but wonder why there isn’t some lingering resentment.

Lighting plays a big part in this issue as well, and not from the kids using their magical powers, which is a kind of neat thematic device, besides just being really pretty. The battle between Sivana and Black Adam fairly crackles across a few pages. The collapsing tunnel that sends Billy and Mary home does so with a burst of lightning. Billy’s birth happens during a storm.

BOTTOM LINE: THE EMOTIONAL TWIST TO THE STORY

Shazam! #6 is an interesting part of the plot. After several issues in the Magiclands, we get thrown rather abruptly back into the real world. It felt to me like it was taking a chance to reset a few things prior to getting back into the action – not a bad thing, but not quite as much high adventure either.

Being superheroes isn’t all fun and games, even in the Funlands or Gamelands.