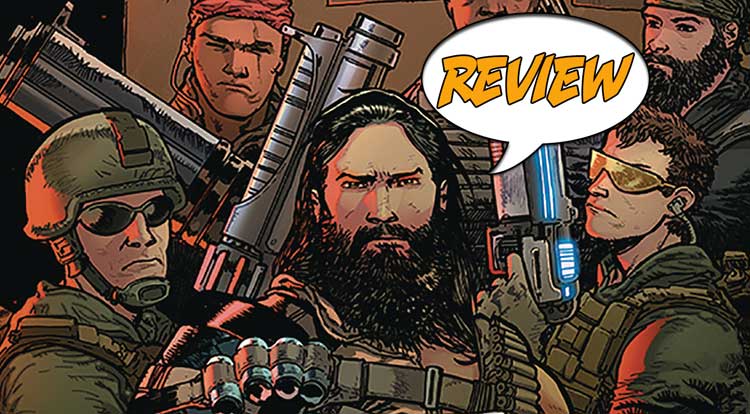 Bold and brash, Birthright #36 is heaven for any fans of fantasy and heroic fiction. Inverting dozens of tropes, the series is an absolute pleasure to read.

Mikey’s back home after years being lost, and chained up for his troubles.  While’s he’s being interrogated, several truths about the toxic nature of magic and the end of the world are uncovered.  What are they?  Find out in our Major Spoilers review of Birthright #36! Previously in Birthright: years ago, Mikey vanished just before his birthday.  His disappearance tore his family apart.  But then Mikey returned, older, stronger, the Chosen One in a magical realm he stumbled into.  But his return augurs badly for our world, for the walls separating our reality and the magical realm are fading, and leaking through is toxic magic and worse monsters…

ALL HAIL THE CHOSEN ONE!

Birthright #36 shows us the promise and peril of being the Chosen One.  Haven’t we all yearned to play that role?  The young lad or ladette, selected by the forces of the universe to set things right?  Whether it is drawing the sword from the stone, slipping on the ring, or questing for the Grail, that idea of destiny, of the One True Hero, has powered fantasy for decades.

But what if the Chosen One actually sides with the bad guys’ prophecy foretold he should overthrow?  And what if, having betrayed his cause, he returns home on a mission from the tyrant he didn’t kill?  That’s the brilliant premise of Birthright.

I loved this issue.  From the underlying storyline to the fantastic art, to the sense that everything has gone badly and is destined to get far, far worse, Birthright #36 is the perfect jumping on point for readers new to the series.

The discovery that our Earth harbors magical creatures and items leads to the establishment of a team of soldiers and scientists, dedicated to finding, cataloging and if necessary, containing these incursions.  But the return of Mikey Rhodes to Earth as a hulking warrior who apparently fulfilled his destiny brings with it the peril of further magical incursions, with monsters ready to go on the rampage across an unprotected planet.

DRAWING THE SWORD FROM THE STONE, OR THE SHORT STRAW?

With Mikey being interrogated for most of the issue, the action occurs outside.  Artist Andre Bressan’s work in Birthright #36 is strong and bold, with beefed up characters and monsters dominating the page.  The fantasy setting allows his imagination to run wild, with huge dragon-like figures running rampant, and other, more grotesque creatures providing an intimate picture of the toxic effects of magic.

There’s an organic feel to Bressan’s line work, with characters and creatures imbued with the sense that events are about to break out into a massive brawl.  This raw sense of power is exemplified in the figure of Mikey.  Chained at wrist and ankles, he seems ready at any moment to break free and embark on a rampage through the holding facility.

With the Boy of Destiny trope largely played out, what else is there to do but upend all the tropes?  Joshua Williamson’s storytelling wades hip-deep through the inversion.  Mikey says he’s the Chosen One, who prophecy foretold would overthrow the evil God-King Lore.  But did he, and was he?  Are the Mages from the magical realm of Terrenos sent to Earth, really protecting it from Lore’s depredations, or hoping to profit from our vulnerability?  And if Mikey is lying about his status, who really is the Chosen One?

The best genre storytelling sets up questions and then answers them in a way that leads to even more questions.  Birthright #36 does this in spades, and while some might find it irritating, I thought it worked wonderfully well – readers are rewarded with answers, and then can look forward to more answers (often found at the edge of a sword blade, which is a bonus for me).

As someone who grew up in the 1980s reading Tolkien, David Gemmell, Stephen Donaldson, David Eddings, Raymond Feist and a menagerie of other epic and heroic fantasy writers, Birthright #36 feels like every single one of those authors sat down to dinner, drinks in hand, and decided to spin the most fantastical distillations of their works.  It’s bold, it’s brash, it contains more tropes than you can point a stick at, but it’s fun, heady, exciting stuff.  I can’t recommend it highly enough.