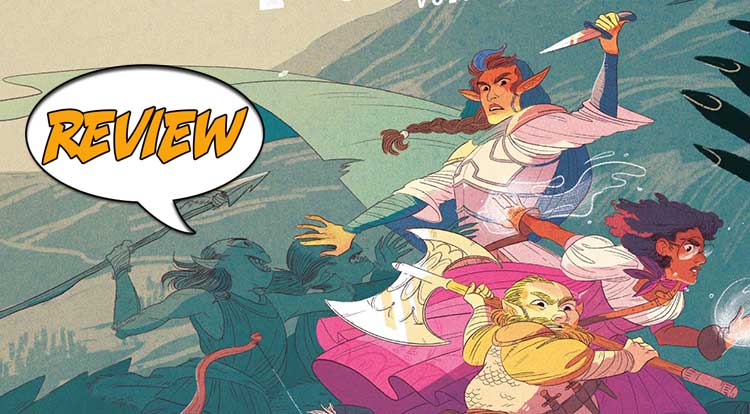 Your weekly role-playing group has been in a little slump. Are you a first time DM and you are nervous about playing? Maybe you’re a veteran campaigner looking for something new? Well, we are here to help. Today we roll the dice and review the roleplaying comic/magazine/adventure ROLLED & TOLD VOLUME 1 from Lion Forge Comics. Previously in Rolled & Told: Rolled & Told has been a monthly publication from the good folks at Lion Forge which has been a combination of comic book, role-playing guide, magazine and all around great title. Each issue contains an adventure suitable for playing with your gaming group, articles on the art of role-playing, and short comics illustrating the titles party as they embark on an adventure. Lion Forge has collected the first seven issue into one hardback volume and you can pick it up this week.

Role-playing games are undeniably hot right now. Call it a convergence of the moon and stars, the influence of quality live action podcasts like Critical Hit and others, all it a realization that it’s fun to pretend to be a half-elf fighter/mage with a backstory as dark as Batman’s underwear drawer. Whatever the reason, there has been an explosion of product from an untold number of publishers, content providers, and self-publishing authors that have flooded the market. In many ways, we are currently in a Golden Age of role-playing games that is eclipsing nearly any time in recent history. Into that fray came Lion Forge with the publication of the monthly book, Rolled & Told. The brainchild of Lion Forge lead game designer, E.L. Thomas, Roll & Told is a modern love letter to the print role-playing magazines of days gone by. Formatted in comic size with a slick cover and high-quality content, I reviewed the first issue here on Major Spoilers back on September 26th of 2018. Now, nine months later, I have been given the opportunity to review the collection of the first seven issue (zero thru six), and I have to tell you, many of my original statements stand.

First, let’s talk about the adventures found between the hardback covers. There are seven full adventures and six mini-adventures. Per the title, the full adventures average around five to six hours of playtime while the mini-adventures clock in around two to three hours. Now anyone who has played more than one session of a role-playing game knows the quoted times could be shorter or longer depending on player shenanigans. Each adventure follows the same design format: description, glossary, and notes regarding scaling. You are then treated to the adventure itself, complete with stats, appropriate NPC information, and plenty of illustration and eye candy. The adventures are set up to be useful to a seasoned Dungeon Master, as well as containing enough hints and pointers to make them friendly to the newer inductees. Each adventure take advantage of the Open Gaming License and is fully compatible with Fifth Edition Dungeons and Dragons rule, and the experienced player may even want to take a crack at converting them for their own system preference. The adventures themselves are solid and entertaining. I would dare say you could use the adventures in this book to create your own campaign, either within an official world, a homebrew world, or as a standalone world. It is that good. Writers for the adventures include the aforementioned E.L. Thomas, Tristan Tarwater (Princeless:Girls Rock/Girls Leadership Authority, Shamsee) , Anne Toole (Crystal Cadets, Assassin’s Creed: Origins), Josephine Yanasak-Leszczynski, Kat Kruger & Phil McClorey (Dark Horrors, Horrors in the West). Each adventure is complete, and they give plenty of hints and suggestions about how to run them. The nice touch is, you can still adapt them to your own play style and fully enjoy them.

Each adventure also contains spot illustrations and even two page comics relevant to the story from a wide range of artist such as Jemma Salume (Adventure Time, Mouse Guard: Legends of the Guard), Max Bare (Mystery Afoot, The Last Kids On Earth) Leila Del Duca (Shutter, Sleepless), Jeremy Lawson and so many more. There are so many in fact it is difficult to list them all and their credits. The contributor pages constitute three solid, double-columned pages, and reads like a list of stars and up and coming stars.

Despite the varied artist and cartographers, the book manages to keep a solid and structured feel. Much of this should be attributed to the Creative Director Annie Monette and Designer Robin Allen. The overall look and feel of the book adds to the reading enjoyment.

The articles are wonderfully done as well. They range from thoughts on running romance plots, monster reviews, single class adventures help, house rules, random tables. Among the article authors are such notable names as novelist Joseph D. Carriker, Jr. (Shadowtide, Sacred Tide), Josh Trujillo formerly of Telltale Games and writer of the Total Party Kill Guide and even Crystal Frasier of Green Ronin Publishing and a ton of other works. Again, there are more, but Stephen only allows me so much space to blather on. No matter your skill level or experience, you will find something in these articles to help you.

MAY YOUR ROLLS ALL BE TWENTIES…

Published in conjunction with their Quillion imprint, Lion Forge has provided a great entry into the gaming marked with Rolled & Told Volume 1. Besides all of the great content from the single issues, you get a ton of extras including monster tokens by Anna Denesyk, a beautiful character sheet, behind the scenes sketches, and even character sheets based on the Roll & Told house party of adventures. Additionally, I checked, it is sized approximately the same dimensions as all of the other Fifth Edition books on your shelf, so it should fit in just fine.

I really am excited about this book. Besides being a great resource for role players of all skill levels, it is an example of what can be done when you think outside the box of how we consume content and what can be done when you apply the established aesthetic of one product to a different product. I look forward to running these adventures for my players and see their faces when they come upon the Animated Taxidermy Owlbear!

ROLLED & TOLD VOLUME 1 provides a plethora of entertainment options and should make its way to not only your comic collection but your gaming table as well.

A great addition to any gamers collection of tools, pick it up before your players do!